The Bureau of Land Management has partnered with Team Rubicon - a veterans group - to train former service members to fight wildfires.

Sand and gravel crunched under the pounding boots of about 150 men and women walking and jogging on a rain-drenched morning at Paramount Ranch in California's Santa Monica mountains.

The wildland firefighter hopefuls were tackling a fitness test. They had to cover three miles of outdoor terrain with 45-pound packs on their chests in less than 45 minutes.

Firefighting instructor Sage Decker ran alongside the trainees. Decker helped fight two major fires in Southern California last year, one of thousands of firefighters who came from all over the country to respond to a record fire season in the state.

Some, like Decker, had faced difficult battles before. They were military veterans who transitioned from service in the armed forces to battling wildfires.

When Decker first got out of the Army in 2000, he had trouble finding a career that provided the fulfillment of military service.

"I was looking for jobs and I was doing some carpentry stuff," he said. "I just wasn't really happy with that."

Decker's brother hooked him up with a fire crew in Wyoming, and it stuck. He now has 16 years of wildfire response under his belt.

"I think it's a really good route to go. It provides stability, and just a good brotherhood," he said.

Military experience on the fireline

Between fire seasons, he travels the country providing training through a program with the Bureau of Land Management and Team Rubicon, a non-profit veteran service organization that responds to natural disasters worldwide.

With firefighting, veterans "have a group of people that they're with all the time, similar to a platoon or a battalion, Decker said. "We deploy together. Military service translates really well into work on a fire line."

Veterans who complete the Team Rubicon-BLM course earn their Wildland Firefighter Type II certification, allowing them to mobilize to assist federal agencies in responding to fire and to be paid as firefighters.

"Now we're getting fires that are lasting longer into the year past the season," Asselin said. "So it's really important that we have a pool of trained wildland firefighters."

Then-Interior Secretary Sally Jewell first announced the Team Rubicon-BLM partnership in 2015. Jewell and then-Agriculture Secretary Tom Vilsack stressed the growing threat of catastrophic wildfires due to climate change and drought, as well as the need for federal agencies to strengthen the available workforce to safely contain increasingly ferocious wildland fires in Western states.

Team Rubicon and BLM have trained more than 900 firefighters. This year the program is significantly expanding. It's on course to reach a total of nearly 2,000 trained wildland firefighters by the end of 2018.

Organizers say military veterans are a logical resource for fire agencies because they're accustomed to the physical challenges of working long hours on tough terrain.

"It's unique fire fighting, because it's not the same as fighting a structure fire," Asselin said. "This is a much bigger area. It's wildland fire, so it's a huge area where you have to put large perimeters up."

"Wildland firefighting is physically one of the toughest things you can do," said Jason Boeshore, Veterans Program Coordinator with the non-profit Conservation Legacy Southwest Conservation Corps in Durango, Colorado.

Boeshore deployed to Afghanistan with the Missouri Army National Guard and worked route clearance-detecting and digging up bombs near the Afghan-Pakistan border.

"Once you endure the stress of combat, fire's not so bad," he said. 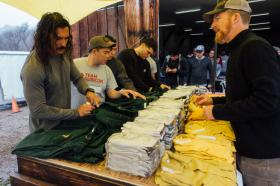 A sense of mission

Veterans Fire Corps teams live and work in the field, learning wildland firefighting 101: the basics of using chainsaws and hand tools to create a fire line, and wilderness first aid. Boeshore said most of the veterans spend two six-month seasons with the Corps, then join a fire crew somewhere else in the country. The priority is employment.

"We have so many veterans out there that just need meaningful careers," Boeshore said. "I have a lot of guys coming into this program that are jobless and homeless."

Veterans experience a lot of the things they miss from military life within the structure of firefighting crews, Boeshore said.

"Veterans need camaraderie. They need to be part of a team. And when you're working in forestry, especially in fire, that's what you get," he said. "There's a chain of command. There's a hierarchy. There are specific missions."

That sense of mission is what drew Marine Corps veteran Tomas de Oliveira to Team Rubicon's wildland firefighting training. He lined up with fellow students getting sized for fire retardant pants, shirts, and gloves in high-visibility yellow.

"I just always feel like I want to do more for people who find themselves in probably the worst day of their lives," de Oliveira said. "I figured helping to fight the fires that we tend to have in California yearly would be a good way to do that."

In the Marines, de Oliveira spent years working embassy security around the world. He's now a reservist. Last year he was part of the Team Rubicon response teams helping with Hurricane Harvey recovery in Texas.

De Oliveira's not sure about going into firefighting as a career path, but he said he thought the chainsaw skills will be useful in future disaster responses.

Overseeing the gear-fitting was Michael Lloyd, the National Wildland Firefighter Program Manager for Team Rubicon. He emphasized the need to assist veterans during the transition to civilian life, something he encountered firsthand as a veteran of Desert Storm and Desert Shield. Transition assistance was virtually nonexistent when he left the Navy in the 1990s.

"It was hard. It took a couple of years to get your bearing again and to find that foundation of what your life was post-military," Lloyd said.

"Fighting fires exercises all those things that you really got used to in the military that you lost when you come out into civilian life."