Researchers at the Department of Veterans Affairs say that raising food or animals has therapeutic value for former service members.

Listen
Listening...
/
Bobbie O'Brien reports on the therapeutic effects of farming for veterans.

"I always had a garden; it's relaxing," said Lodico as he packed soil around the fence post. "It's self-sufficient. You don't depend on anybody. It's part of me."

Lodico served two tours in Vietnam and prefers gardening to being around large crowds or doing nothing.

After the veterans' plot is planted with lettuce, tomatoes, onions, radishes, and strawberries, the ripe produce will be donated to veterans at risk of homelessness.

There's also a bee hive, chickens, and a greenhouse with a large above-ground swimming pool. That's where garden supervisor Will Carey is farming fish -- 350 blue tilapia. 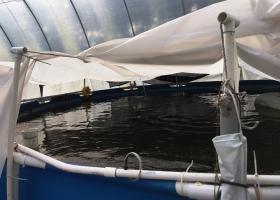 "This is one of the things we want to introduce to the veterans as well," Carey said. "There is a certain amount

of science involved in it, but it's also something you can incorporate in your everyday life."

He donates the fish to a local food pantry. Carey said the idea is to show veterans how they can farm without large tracts of land. He's on less than an acre.

For the past few years, researcher Karen Besterman-Dahan with the VA's Center of Innovation on Disability & Rehabilitation Research has studied the impact of agriculture and horticulture on veterans' health.

"There's been a lot of veterans who have gotten into farming," Besterman-Dahan said. "It has really provided them a lot of therapeutic value in terms of health benefits - physical health, mental health, restorative."

"It's been a sense of value and feeling of meaningfulness when people come back (from deployment)," she said. Besterman-Dahan has interviewed veterans throughout the U.S. and asked how farming affected their reintegration into civilian life.

Many of the veterans she interviewed are members of Farmer Veteran Coalition , a national nonprofit organization that helps educate and mentor veterans interested in starting a farm or career in the agricultural industry. 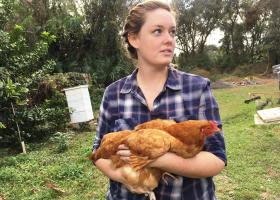 Michael O'Gorman, an organic farm manager with nearly 40 years in the business, started the coalition when he learned that rural Americans made up a disproportionately large number of service members wounded and killed in Iraq and Afghanistan.

O'Gorman sensed an opportunity to share his agricultural knowledge and bolster the shrinking population of farmers by attracting young veterans back to their roots.

"This is something we can do for the veterans when returning home," O'Gorman said. "There's less services for them when they live in these rural communities. There's more geographic isolation, and that's an issue for a lot of returning veterans. But there's also opportunities and meaningful careers in agriculture."

But eight years later, the Farmer Veteran Coalition has almost 9,000 members and hears from more than 50 veterans a week.

Yet he's the first to caution that farming is not the idealistic, bucolic setting many envision.

"There is loss in farming, there is tremendous risk, and there is a lot of financial stress," O'Gorman said. "At the same time, there's a power that comes from somebody who has chosen those difficult paths - who refused to be the person in the cubicle."

"I'll be the person on the front lines, whether it's militarily or growing food," he said.

And it also manages a Homegrown by Heroes label now being used by 700 veterans to help market their agricultural goods in 16 states.

O'Gorman hopes that it will become familiar in supermarkets nationwide so shoppers can seek out food farmed by former service members.