This summer, WUNC’s 2021 Youth Reporters turned on their mics and collected powerful stories from their communities. Kiana McKnight, from Greensboro, navigated through her community’s relationship with faith and mental health.

When I was growing up in the church, every Sunday was God’s day, no exceptions. And for a lot of us in the Black community, going to church was not optional.

It’s not that I didn’t like going to church — I love talking to God, and praying, because I have gone through things in my life that I believe I wouldn’t have overcome if it wasn't for my faith. It’s just that sometimes I didn’t agree with what was being said.

As I grew older, the place I went to worship turned into a place of judgement. My mother, Bermia “Mia” McKnight, can relate.

"We like to push things under the rug," she said. "Oh, you'll be okay. When really people aren't. They really aren’t."

My mom grew up as a preacher's kid, which means people held her to a higher standard for being a model Christian. She reflects on a time when the pressure became to much.

"I cried all the time," she said. "I felt like I was being judged. It was awful, but there wasn’t anybody that I felt comfortable talking to."

I remember a time when going to church made me feel depressed. I just did not want to be there. It just made me sad every time I went."

I had my first depressive episode after my parents divorced, and by the time I was sixteen, I was having anxiety and panic attacks. I started to withdraw from my family and friends, and I spent most of my time in my room. I didn’t think about turning to the church for help or guidance because, like my mom, I felt like I would be judged and not heard.

I’ve seen mental health heavily stigmatized in the Black community, so I thought church could be a safe space to seek guidance. Now I'm wondering, even if my mom was comfortable talking to someone, would they have listened? Would there have been a plan for help?

"It’s so judgmental, we'll call it out, but there's no solution offered," Mom said. "And that even started back when I was pregnant with your sister."

To deal with my anxiety and depression, I did try to get support at church, but my pastor told me the reason I have depression is because I’m not having enough faith in God. He told me to pray more. Little did he know I was praying everyday and my relationship was growing strong. But guess what? I was still mentally struggling.

My friend, DonTrease Hazlett, has had similar experiences.

"I actually don't think that the churches handle mental health properly, because they just say, 'Jesus is going to take care of you, throw some prayer on it,'" Hazlett said. "Like, yeah he is, and prayer will work, but he also sent his people here so we can help each other out. And there's other things that I can do, other than just pray, like, prayer and and no word faith without works is what? Nothing."

Hazelett takes her faith seriously, and at the same time, she understands mental health is real and needs to be addressed. She has struggled with it herself, but decided to combine her faith with some professional support.

"I was going to counseling sessions and stuff like that, and I will go to my Bible, because God has the answers in that Bible," Hazlett said.

The work to start these discussions and change the Christian community isn’t only coming from my friends. It also comes from pastors like my grandmother, Reverend Dr. Pamela Carrington-Holder.

"We think that the answers that worked back then, you know, let's pray about it, let's get this child to the altar.  In some of the ways we're antiquated because we're still trying to use those same answers," Holder said. "And unless we get educated about it, that's all they're gonna hit. That's all we're gonna have in our community."

My grandmother is a clinical pastoral chaplain, and during her training she realized mental health issues were a lot more common in her family and community.

"One thing I learned is that I was around people, family members, who if they went to the doctor may have been diagnosed with some type of mental illness," she said. "I also learned how close it could have happened to me. My father was killed in a car accident. So I went through counseling myself. There was a period of time that I had to use medication. And I think that I also learned in the training, that no one is exempt. No one is exempt."

My grandmother’s father died right before she began training to become a clinical pastoral chaplain. It was tough to push through, but it helped her notice the gaps between the black church and mental health. This inspired her to visit hospitals and speak with patients who are struggling with mental issues.
Some of these patients ask for prayer while most of them just want somebody who will listen and not judge. She understands that a mental health illness is just that, an illness, and it needs to be treated just as any other illness is treated.

"We need to start it now with our youth, and so that it doesn't go to the next generation with this stereotype."

My grandmother believes de-stigmatizing mental health in the church starts with education and leadership.

"I think that if we educate more, then people will feel freer to be able to seek help and to find somebody to help them. I think that education is key. And I think that we need to start it now with our youth, and so that it doesn't go to the next generation with this stereotype."

In my family, I hope the cycle stops with me.

If you’re struggling with mental health, seek out a therapist or counselor. God can still be your guide on the journey to mental wellness with a little extra help. 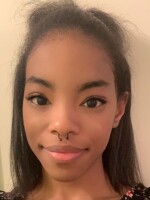 Kiana McKnight
Kiana McKnight was raised in Atlanta, GA, where she first found her love for writing and telling stories. She is a third year college student majoring in journalism, and her dream is to work in television and film media.
See stories by Kiana McKnight
LATEST STORIES
Introducing The LaboraSTORY
A youth-centered project designed to develop the content and curriculum creation skills of local high school students.