Instead Of Buying New Ammunition, These Gun Enthusiasts Recycle

As the pops of gunfire echo around him, Monte Petersen stoops to collect small brass casings that recently flew from his .45 pistol. The cartridges jingle like loose change as he picks them off the gun range floor and tosses them into a bucket.

Petersen is one of thousands, perhaps millions, of target shooters who take their shooting hobby further: Recycling their ammunition cartridges and assembling new cartridges by hand to shoot again.

They call it “reloading” their ammunition. It’s a passion project, money-saver and hands-on hobby all wrapped into one.

On a weekday morning at Eagle Gun Range in Lewisville, Texas, Petersen tours the range while his buddy Jim Payne readies his cartridges in his booth.

When Petersen fires a gun, the bullet shoots out of the barrel. What’s left behind is a brass casing that held the bullet, the primer and the gunpowder. The package, called a cartridge, is often referred to as a “round.”

The brass cartridges are reusable.

So after the shooting is done, reloaders like Payne and Petersen get to work, scouring the gun range floor for good brass. Between them, they have about 70 years of combined reloading experience.

“Reloading is basically taking your empty brass that’s already been fired and then putting all the components back into it to make it so it’s just like new again,” Petersen said. “So you can shoot it again, but at a much reduced cost.”

The gun range rule: Reloaders can pick up only their own brass.

A 50-round box of .45 ACP pistol ammunition typically costs about $26. Petersen says he can reload spent casings for just $8 worth of materials, saving him $18. A target shooter might use 100 or 200 rounds in a typical visit.

Petersen saves about $24 reloading 50 rounds for a .357 pistol, he says. So it saves some money. But it’s also just fun to customize cartridges.

“I’ve never had a gun yet I couldn’t make shoot better than most factory rounds,” Petersen said. 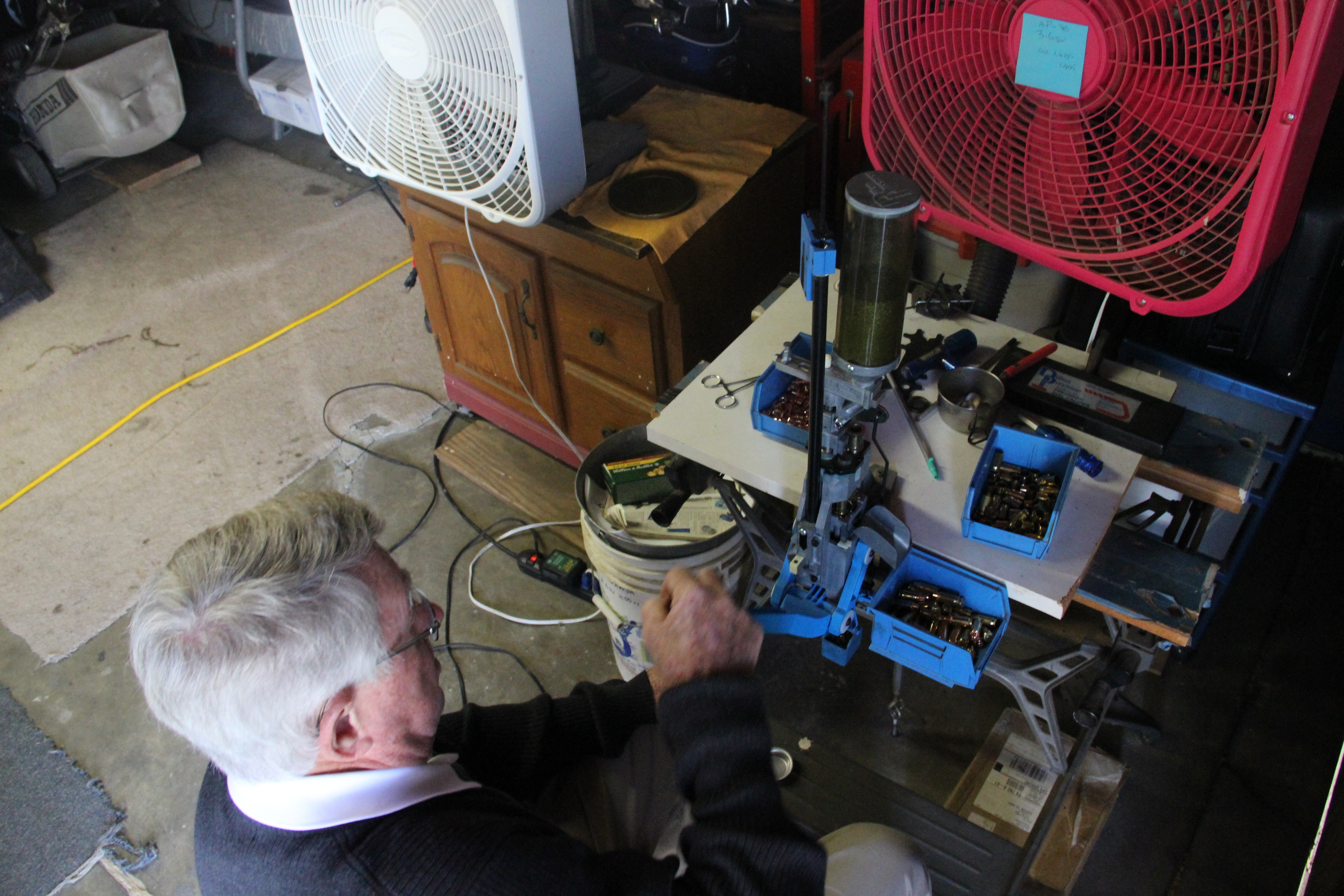 Jim Payne recycles hundreds of cartridges from his garage in Denton, Texas. Reloading, he says, has saved him thousands of dollars over the years.

The throngs of hobbyists who spend time reloading their spent ammunition do it not at the gun range, but huddled over metal machines in garages, workshops and basements all over the country.

Payne, a retired Delta Air Lines pilot, stores his setup in his garage in Denton, Texas. It’s a work table no bigger than a small desk, with tools, a clamp, and a machine press. He stores gunpowder and various brass containers ready to reload in small drawers.

“The way I started was, I was in Oklahoma and I went to a shooting range and I got hooked on shooting bullseyes,” Payne said. “So I bought those three pistols and I said, ‘I need a way to reload this, because I’m going to be shooting a lot.'”

After collecting his spent casings at the range, he brings them out to his garage and gets to work. 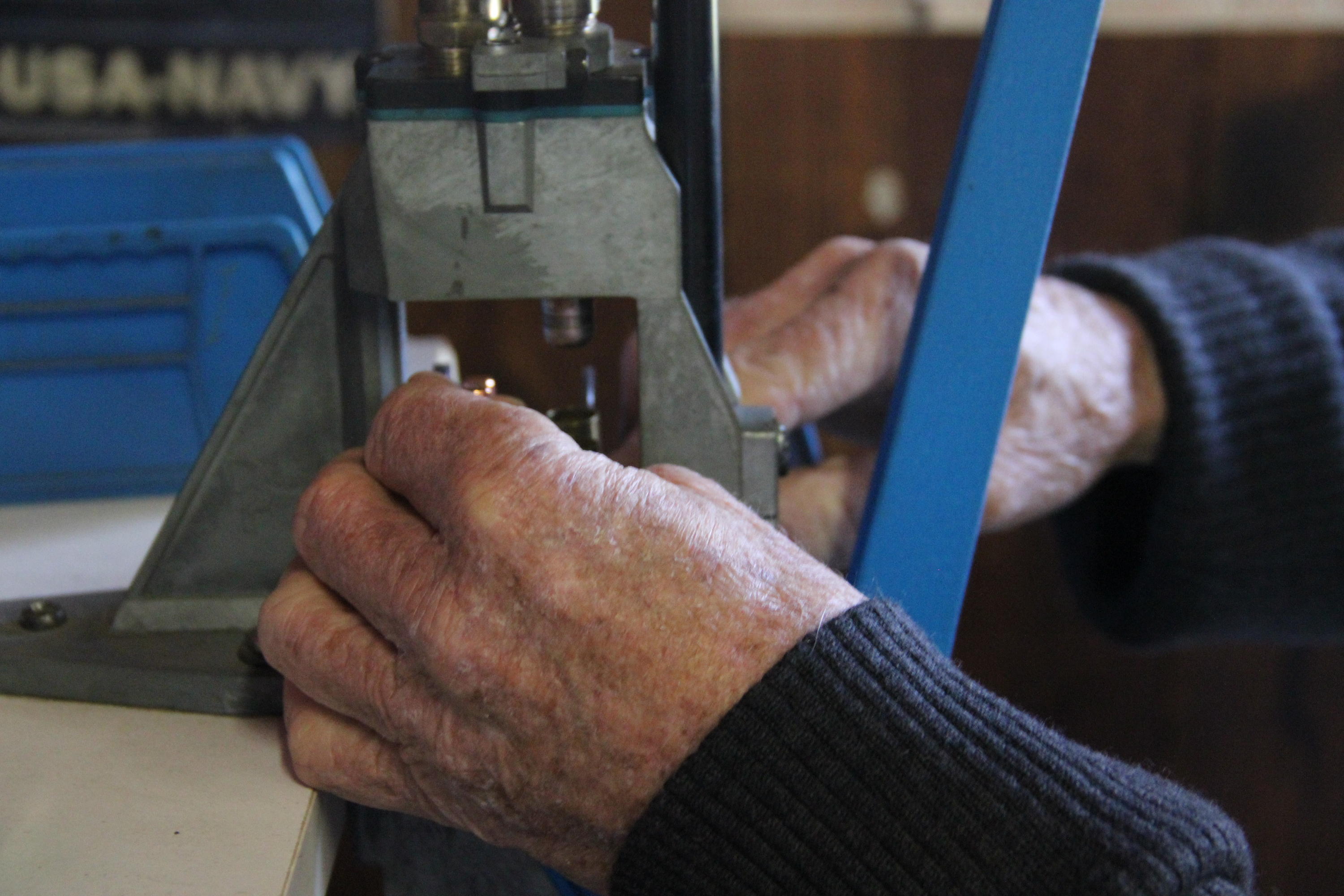 First, Payne cleans the brass. He uses a resizing die, like a mold of a finished cartridge, to resize the cartridge, which removes the old primer. Then, he puts a new primer in, followed by the gunpowder, using a very precise digital scale.

Eventually, he pulls a lever on his press to combine all of the materials together to form a new, ready-to-shoot cartridge.

While it’s not exactly common, reloading ammunition can be done at a fairly entry level. Amazon sells a starter kit of sorts, excluding brass, for about $150. 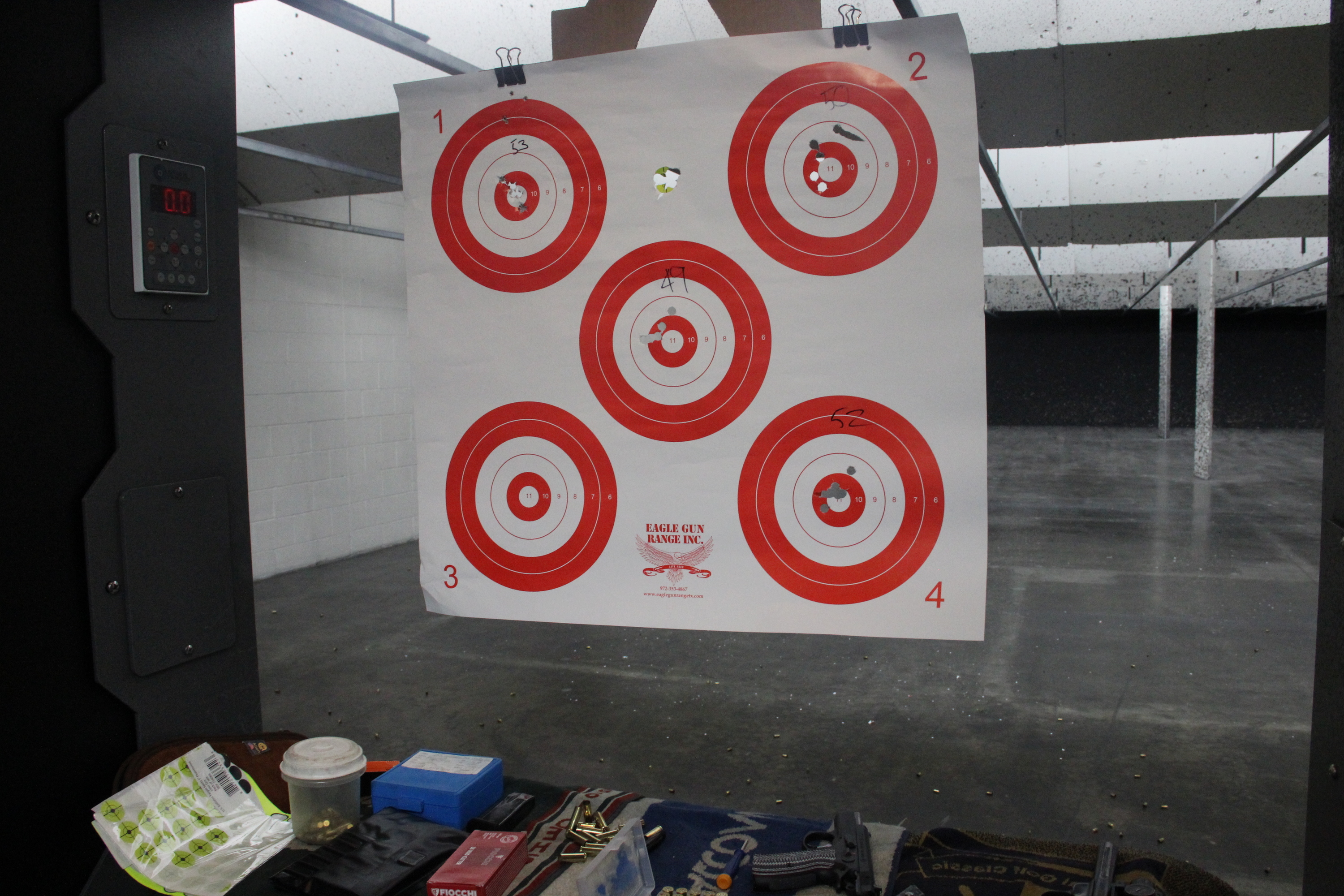 Back At The Range

Payne and Petersen head back to the range with their reloaded cartridges. Petersen shoots about once a week.

Payne, meanwhile, reloaded 500 .45s in a single sitting. He has a whole case of them ready to shoot.

A few rows down the gun range, Glen Christopher readies his ammunition for some target practice. He says his twin hobbies are just enough for him.

“I have two hobbies,” Christopher says, laughing, “loading bullets and shooting ’em. That works out well for me.”

Last year more than 4 million children participated in a school lockdown drill. The exercises are ostensibly a way to train and prepare students, teachers and administrators to keep safe in the event of an active shooter. But no research has been done into the psychological effect of these drills on the children they aim to protect.