I love to read. Fantasy, mythology, and anything by Rick Riordan. As a kid, I would go to the library almost every day after school. I would sit on a bean bag and read the Magic Tree House series.

For me, books are an escape from reality. The books I read when I was younger didn’t represent me at all as a young Black man. It was a fantasy. The books I did read were about a world that didn’t exist. This was different for Kaiden Clark whose mom found books that created a world to reflect Kaiden’s Black experience at a young age — even if she didn’t have that in school.

“I went to an elementary school that was predominantly white. I could count on, I think one hand, the number of Black kids that were in the fifth grade with me,” said Kaiden. “So there wasn't really any representation within our library. I'm so thankful to my mom for being able to offer those books that did have representation for me as a person of color and as a woman in general.”

Kaiden is a junior at Southeast Raleigh Magnet High School. She loves books, and from the Children of Blood and Bone to BUD, Not BUDDY, she has read a lot. She really enjoys books that represent the Black experience but aren’t rooted in just the Black Struggle. She told me about one particular book series she enjoyed when she was younger.

“The series was about ballerinas and most of them were either Black or Latina ballerinas. And I thought it was so cool to be able to see, not only these fun and light-hearted books with Black leads, but also these fun light-hearted books that show Black leads who are feminine,” she explained. “I think there's a very large stereotype that there isn't a feminine side to Black women and that they have to be hard and aggressive and hurt and cold-hearted, and I don't think that's true at all.”

Kaiden read these Sugar Plum Ballerina books in second grade, so they were tucked away in her attic. We had to go on a wonderful and hot tour to find the books that gave her a true sense of representation. There were multiple boxes of books, spanning all the way back to first grade. It made me think about how Kaiden found a form of representation that I didn’t. Not because it didn't exist, but because I didn't access it.

Book bans are now threatening access to representation for kids in school. In North Carolina, within the past year, some local districts are being pressured to remove books from schools that focus on gender identity and racially sensitive subjects. A lot of adults have had tons to say about what we, the youth, should be reading, but North Carolina youth advocates like Alexis Altshuller have something to say too.

“I don't think we need book bans, because I always think that throughout history when things have been banned, people have always found a way to get to it anyways,” Altshuller said. “So I think rather than book banning, I think parents should talk to their kids about these books. Because I mean, I know as, as a kid, if my parents tried to take something away from me, I'd be like, ooh, I want that even more now.”

Alexis spoke out against a proposed book ban at the Wake County School Board meeting back in March. Some parents at Alexis’s school were trying to ban Lawn Boy, a book about a young Latino boy discovering his gender identity. She and her peers from Cary High School kept that book in their school. The work continues across the Triangle in Old East Durham. Naledi Yaziyo is addressing the issues of representation by creating a space that centers Black authors.

“For every book that you ban, this is going to be the book on my shelf. It makes me feel that there's an understanding that books are inherently dangerous, right,” Naledi says. “The people who will ban books are people who understand that you're not banning a book, you're banning an idea. And so those ideas matter, because why would somebody ban something if it's not because it matters and is important and is powerful?”

That’s why she and her co-founder Dumela Machiavelli founded Rofhiwa Book Café. Their mission is to help the Black community find books that amplify all aspects of Black culture. She showed me the section for young readers. It’s about 10 rows of books, from fantasy to autobiographies.

Naledi says it's all intentional.

"So a lot of our children's literature is really, I feel that it is very political, particularly with picture books. To have picture books that are just about saying goodnight, I think, to give, to enable, to allow Black children to have a childhood is inherently political,” Naledi says. “Because a lot of what has happened historically is an attempt to deprive Black children of their childhoods. And so what we always try to do with our children's literature is to find books that are just like this one, which is Time for Bed, Old House — it's a grandfather trying to get his grandchild to go to sleep.”

She took me up to the storage of the bookstore and showed me comics and books I could never have dreamed of when I was younger. She helped me see that there is still representation in the books I like as well.

Books are my safe haven, my passion, my second world. But that representation that I didn’t have affects me and other kids every day. Just creating this story I have rekindled a flame for reading. And seeing somebody like me on a cover is just crazy to even think about.

So why are we trying to take that away? Books are to be read, not banned. 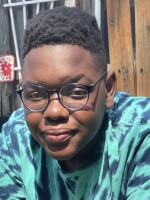 William Townsend
William Townsend is a rising sophomore at Southeast Raleigh High School and former freshman class president.
See stories by William Townsend
LATEST STORIES
Elections 2022
Follow WUNC's politics team for the latest news and information about redistricting, voting, and the 2022 election.
READ MORE
Applications for the 2022 Youth Reporting Institute are now open!
Apply Now
Pauli the Podcast
North Carolina Public Radio presents Pauli, a podcast about the power of one person to change what's possible for us all.
LISTEN
Discuss North Carolina politics. Analyze how and why you love the way you do. Quiz yourself on Black history. Hear poetry from NC's poet laureate. Meet NPR hosts and reporters. You never know where WUNC's events will take you. Join us for this ride! See our upcoming events and sign up to attend.
SEE OUR EVENTS
More Stories