There’s a pandemic impacting our nation that’s been going on a lot longer than COVID-19: Racism.

Recently, my dad gave me a book called "So You Want to Talk About Race" because he knew I had questions, and he knew there are no easy answers. Especially about times when it’s hard to identify it’s happening to you.

I spoke with a couple of peers about their first experiences with microaggressions. Fellow WUNC Youth Reporter Kiana McKnight told me, "One of my teachers asked me if my hair would be a distraction. And I was a little confused. I was like, 'What? What do you mean?'"

Sonia Shah added: "There was a white boy in my class, and he told me that I was pretty for an Indian girl. I don’t know why he had to add 'For an Indian.'"

Hamza Adnan says, "One moment, in fourth grade, someone made a remark that I'm part of ISIS or something like that. There's been a lot of stereotypes about Muslims for that."

Think of them as subtle, indirect discrimination. My first experience was in the fourth grade. I brought Indian food for lunch and there were a couple white kids that were like: “Eww, what are you eating?”

I remember how I felt in that moment — hurt, self-conscious, but mostly confused. At the time, I did not have the vocabulary to call out what I was hearing. I learned the term microaggression later, in the seventh grade, but the comments didn’t stop as my education grew. And they don’t stop when you age out of school. My mom works in healthcare and explained her experiences with microaggressions.

"I've had patients with a rebel flag that don't really want me to take care of them," she says. "And (they) will ask for, is there someone else on call? And the answer is, 'Well, either I can take care of you, or there's really no one else here to do. It's up to you.'"

My mom was born in India, but she grew up here in the U.S. in Sterling, Virginia. Unlike me, she didn’t have the terminology for the microaggressions she experienced when she was younger.

The intention behind such comments aren’t necessarily racist. And the wild thing is, sometimes people mean them as compliments. But they sting, and can eventually add up to serious impact on a person’s mental health. To cope, my mom compartmentalized the racism she experienced.

Having the language to name a microaggression didn’t change what I experienced, but it gave me confidence to call them out. I wanted other students of color to have the words to describe what was happening to them. I also wanted my white peers to understand the subtle ways they can perpetuate racism without realizing it. So, I got involved in a group at my school, Cary Academy, called the Dialogue Across Differences Initiative.

Shah is one of the co-leaders of the group. And although she has experienced microaggressions, she still doesn’t feel empowered to speak out against them all the time.

That's why Shah wants to explore different topics through dialogue this year. She wants to give the community of color at our school the tools to be able to advocate against injustice.

"I definitely think some cool topics that we could explore (are) like women's rights, race, gender — in more depth," Shah said. "But I definitely want to try to do dialogues about different facets of gender equality and gender equity."

To be honest, I’m still not finished with the book my dad gave me. But I’m out here anyway, talking about race and doing all I can to be well-versed and better informed about the power of dialogue to combat racism. 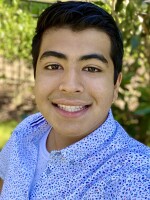 Thavish Sindhwani
Thavish Sindhwani is a 2021 WUNC Youth Reporter. He attends high school at Cary Academy where he is a rising sophomore. His favorite subject is history but he also enjoys his English class.
See stories by Thavish Sindhwani
LATEST STORIES
Elections 2022
Follow WUNC's politics team for the latest news and information about redistricting, voting, and the 2022 election.
READ MORE
Applications for the 2022 Youth Reporting Institute are now open!
Apply Now
Pauli the Podcast
North Carolina Public Radio presents Pauli, a podcast about the power of one person to change what's possible for us all.
LISTEN
Discuss North Carolina politics. Analyze how and why you love the way you do. Quiz yourself on Black history. Hear poetry from NC's poet laureate. Meet NPR hosts and reporters. You never know where WUNC's events will take you. Join us for this ride! See our upcoming events and sign up to attend.
SEE OUR EVENTS
More Stories