From Seville to Cinquillo: Preserving Culture Through a Card Game

For WUNC’s 2021 Youth Reporting Institute, students were asked a simple question, "What’s your story?" Ellie Stevens, of Apex, answered by taking an introspective look on her family background and cultural origins.

This summer, I set out to learn more about my heritage and identity by playing a card game with my abuela, Mercedes Mejas Rodriguez — or Bela, for short.

To preserve her culture, she plays the Spanish card game, Cinquillo. Twice a month, she meets with a group of ladies she met in 1980, to laugh and win a little money.

“Well, we thought that it would be fun for the ladies from different countries, Spanish speaking countries, to get together and keep up the tradition of El Cinquillo,” she said.

Raised on tapas, Cinquillo, and family, Bela enjoyed her life in Sevilla, Spain. She eventually met my grandfather, a U.S. Naval officer stationed in Rota, Spain.

They got married, she packed her bags, and left her whole life behind for a foreign country she had never seen before.

Grandpa (Gee):“So I went to this window where the bank was for the Navy exchange, and there was this pretty little Spanish girl there, and I forgot what I was doing there at the window.”

Gee: “And from there things grew. I got orders to come back to the United States. And I said, `Come with me’ and she says, ‘Oh, okay, I will.’”

Bela:  “Yeah, I remember the day I left, like it was today. I remember saying goodbye. And I mean, even now I get emotional about it.”

I didn't know anybody. So that's when I was waiting for the mailman all the time, waiting for, you know, letters from home. And it was like a ray of sunshine, you know, when I got my father's letters.

Bela went from a tight-knit community living with her four sisters and parents in one big house to a tiny apartment in Denver, Colorado. There, she found herself home alone most of the time because my grandpa was out to sea.

She tells me what got her through that time.

“I didn't know anybody," she said. "So that's when I was waiting for the mailman all the time, waiting for, you know, letters from home. And it was like a ray of sunshine, you know, when I got my father's letters.”

When Bela first moved to the United States, her father wrote to her every single day. She kept a few letters in a cabinet in her dining room and pulled them out to show me.

"I kept all of them. This is my father. He had really, really wonderful handwriting... I mean, that's a long time ago, that was in 1973. 'Be good and take care of your mama, million kisses from your Bello (what her family called her father) and Bela (what they called my Bela's mother).'"

My Bela moved all over the country with her three children, until finally she came to Virginia Beach.

Then, a woman from church introduced her to El Grupo de Conversación en Español — The Spanish Conversation group. A collective of 35 ladies would meet monthly at each others' houses. The host prepares lunch and dessert from their country, and there is only one rule for admission.

"It didn't matter what country you were from," Bela said. "As long as you spoke Spanish, that was a requirement."

Bela has been a part of the group since 1980. In 1992, Bela and some of the ladies then started another group centered around the Spanish card game, Cinquillo.

The rules of Cinquillo are complicated, but the core of the game is laughter, cards flying everywhere, and nickels. Every time you can not play a card you throw a nickel into the pot. The winner then gets all of the nickels. My grandmother is notoriously the Cinquillo champion.

“The Cinquillo... I love the Cinquillo," she said. "We were nine people and there were some of the ladies, you know, you always find the ones that have a really good sense of humor, and some that, you know, are more serious.”

I was super excited to get the chance to play. I had never been to a game before, and I felt like I was getting a window into my Bela’s world. Not even the ladies' husbands are allowed in the room when they are playing, so it was like I was in on some kind of secret. I was greeted with side comments and laughter that perfectly embodied the Spanish spirit and made the game experience so much fun.

Cinquillo gave Bela a piece of Spain in the United States, and from that came friendship and community support.

“That helps a lot, having that group, and having the Spanish group luncheon too," she said." So that, at that time, it feels almost like you're in Spain. When my parents died, having really good friends like that, they supported me. You know, it's funny, because I feel very much at home here. Because I have my family here, you know, my children, my grandchildren that I love so much.

"So, I feel very much at home. But then when I go to Spain, I feel at home too.”

Learning about my grandma’s identity and community has helped me to understand my own. I embrace my love of laughter because I know where it came from, and when I look up at the blue sky on a sunny day, I remember my grandmother grew up under the same sky. 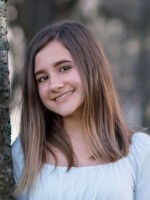 Ellie Stevens
Ellie Stevens graduated from Cardinal Gibbons High School in May 2021 and will attend Davidson College in the fall. She plans to major in English and minor in Data Science with hopes of pursuing a career in journalism.
See stories by Ellie Stevens
LATEST STORIES
Introducing The LaboraSTORY
A youth-centered project designed to develop the content and curriculum creation skills of local high school students.