'It's easy to hide, but I'd rather be heard' ― Jewish youth confront antisemitism

Today marks three years since the Tree of Life Synagogue shooting. WUNC Youth Reporter Olivia Haynie spoke with peers to reflect on the tragedy and understand how her generation of Jewish youth are coping with the rise in antisemitism in recent years.

“These binders are full of the history," she says. "This one is my grandma and this one was my grandfather on my dad's side."

Rivkin-Fish is Jewish, and she’s been exposed to a lot of her family’s history about their experiences with hatred and discrimination.

“My dad lived in Poland and it was very, very bad. His parents experienced a lot of antisemitism,” said Rivkin-Fish. “At one point, people would beat them up and mug them just for being Jewish. My dad only lived there until he was five years old so he doesn't remember a lot, but it was really, really hard on his parents and it kind of ingrained in their mind that everyone was against Jews, and everyone was out to get them.”

Rivkin-Fish’s family, like many others, left Poland in hopes of a life without persecution. Some of the Jews who stayed had to hide their identity to survive.

There’s a long history of that in our faith. I’m Jewish, too.

I’m also Black, and for most of my life, I've been aware racism is a problem I have to deal with in this country. My race is always on display; my religion isn’t. And in the last few years, there have been times I’ve felt the need to hide it.

"I had been in synagogue that very same morning doing the very same thing those victims had been doing: practicing my faith in my house of worship."

I remember where I was on October 27, 2018 when an armed gunman walked into the Tree of Life Synagogue in Pittsburgh, PA and opened fire. Eleven people were killed. My dad and I were at an Indian restaurant in Durham that day. We had stopped to get lunch on our way home from a bar mitzvah. As usual, he was on his phone at the table and saw the story. I was in shock. I had been in synagogue that very same morning doing the very same thing those victims had been doing: practicing my faith in my house of worship. The only difference between my congregation and theirs that day was location.

Nineteen-year-old Levi Price remembers the Tree of Life shooting as a turning point in his own awareness of the reality of antisemitism.

"I had to go to school the next day, and I knew that people were probably going to talk to me about it,” said Price. “Everyone in my classes was trying to apologize for some reason. It was like, 'I'm the token Jew.'”

You have to remember: 2018 was just one year after the deadly neo-Nazi rally in Charlottesville, VA. The tiki torches, the chants of “You Will Not Replace Us,” that all came shortly before this shooting. It’s all part of a wave of antisemitism that my generation is facing.

Jillian Breithaupt is a student at the University of Rochester in New York. Right after the Tree of Life shooting, someone spray-painted a swastika on a campus building.

“That was very, very frightening, and very shocking. Because I hadn’t seen a lot of big displays of antisemitism as that,” said Breithaupt. “I would always like to believe that I live in a country that believes in basic human rights, and that all people are equal. And in recent years, it’s become more apparent that’s not the case.”

During the Trump administration, incidents of antisemitism made national headlines frequently. The finger was pointed at the White House and right wing white supremacists for the uptick in violence and hate.

But it’s become clearer to me antisemitism isn’t a partisan issue, it’s pervasive in all parts of American society. Comedian Michael Che made a joke on Saturday Night Live that relied on an antisemitic trope. Hateful remarks against Jews fly left and right on social media everyday without repercussions. I’ve been on Twitter a lot since the pandemic started, and it’s been a source of some very real pain for me. But it’s also where I can share my frustrations with Jewish peers and allies and start important discussions toward healing.

It may be easy for me to hide, but I’d rather be heard — adding my voice to dialogue that combats ignorance and encourages understanding of our faith. 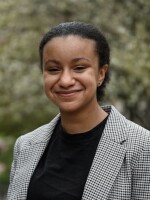 Olivia Haynie
Olivia Haynie is a current undergraduate student at the University of Pennsylvania majoring in Sociology with a concentration in Culture and Diversity. She is a graduate of Riverside High School in Durham, NC.
See stories by Olivia Haynie
LATEST STORIES
Elections 2022
Follow WUNC's politics team for the latest news and information about redistricting, voting, and the 2022 election.
READ MORE
Applications for the 2022 Youth Reporting Institute are now open!
Apply Now
Pauli the Podcast
North Carolina Public Radio presents Pauli, a podcast about the power of one person to change what's possible for us all.
LISTEN
Discuss North Carolina politics. Analyze how and why you love the way you do. Quiz yourself on Black history. Hear poetry from NC's poet laureate. Meet NPR hosts and reporters. You never know where WUNC's events will take you. Join us for this ride! See our upcoming events and sign up to attend.
SEE OUR EVENTS
More Stories