When The Effects Of Climate Change Come To Your Plate

The long term effects of climate change can be hard to identify in day-to-day life. But WUNC Youth Reporter Priyanka Rathnam, from Raleigh, North Carolina, reports on how it's changed her family's access to some mealtime favorites, and how some local farmers are combatting the crisis.

A couple of nights a week we eat a dish called “Sabudana Khichdi," from my mother's home state of Maharashtra.

For my family, it is a normal one pot dish made up of potatoes, tapioca pearls, and spices. We completely rely on fresh produce from all over the state.

But there’s a very real, very imminent threat to dinner time in my house: climate change.

In order to maintain a healthy lifestyle, my family and I shop for fruits and vegetables at the Raleigh Farmers Market. It is a local shop, in downtown Raleigh, where farmers from all over the state come together and sell their goods.

I met with 15-year-old farmer Kaitlyn Massingill, who has been working at the farmers market for a few years. She explained her role, and the schedule of her day — which includes waking up at 5 a.m. — to arrive at the market on time.

“We put out produce and I help unload the van that brings all the produce that morning," Massingill says. "I normally talk to customers and help them educate them on plants and produce. Throughout the day I just sweep and put out and restock produce and work at the cash register some.”

Massingill works on her family’s farm in Johnston County. She is a part of the FFA, also known as the Future Farmers of America. She has a passion for agriculture, so when western North Carolina experienced heavy droughts this summer, she could taste the effects its had on the produce.

Massengill and her family have been adapting to hotter winters and summers with their own technique.

“We do have a greenhouse that we use — we actually have several to have summer plants in there," Massengill said. "And during the summer, I believe, it is the hottest because it gets very hot outside and we try to protect our plants as much as we can and water them as much as we can during the summer months, because if they don't get water... that's the main problem with our plants. Currently, they need a bunch of water when it's very hot.”

Rains have doubled in central North Carolina, according to a report from WRAL in July. But depending on the crop, extra rain may not be ideal.

My family gets our blueberries from a farmer named Justin Milam. He’s from Pender County, which is near the southern coast of the state. Milam has been around farms his whole life. For him, more rain can have devastating effects on his blueberries.

“So, multiple things can happen," Milam says. "One thing that will happen is the berries — the plants will suck up a lot of water for the roots, to try to protect the root system and store that in the berries. And then in the extreme cases, which we had a lot of this year, the berry will burst.”

To deal with climate change, Milam is focusing on the things he can control. Like Massengill’s family, he has developed a plan to deal with excess water in the spring and summer.

For example, overhead irrigation, which allows more drainage to keep the blueberries from bursting. Milam also has a plan to protect the berries from freezing temperatures in the winter.

“So, in order to protect it from freeze damage, you pump once. Once you get to around 35 or 36 degrees Fahrenheit, you pump water over the bushes until the temperature rises back up above," Milam says. "So, for instance, if you know if you're gonna have a night where it frosts or you're going to have a freeze, you would start pumping, and it would encase the bud in ice.”

Honestly, I would've never guessed that's how you protect a blueberry. I also would never have thought you could taste the effects of climate change through blackberries, tomatoes and other crops. My family can barely even find a box of sweet strawberries anymore.

Climate change is literally leaving a bad taste in our mouths. And we better brace for more of its effects in the future. 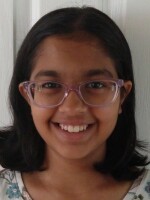 Priyanka Rathnam
Priyanka Rathnam was born in Raleigh, North Carolina, and is a rising 9th grader at Raleigh Charter School at 14 years old. Journalism has always been prevalent in her life, and she has a passion for writing and reporting, which is why she joined the Youth Reporting Institute.
See stories by Priyanka Rathnam
LATEST STORIES
Introducing The LaboraSTORY
A youth-centered project designed to develop the content and curriculum creation skills of local high school students.