The North Carolina Department of Military and Veterans Affairs paid tribute to one of the first Black recruits in the U.S. Marine Corps.

The state recently honored a more than century-old veteran, who is one of the last living Montford Point Marines. Cosmas Eaglin Sr. is also a World War II and Korean War veteran living in Fayetteville.

Last week, North Carolina Department of Military and Veterans Affairs Secretary Walter Gaskin presented Eaglin with a certificate of appreciation and the department’s challenge coin to recognize him for his service. The ceremony also marked Eaglin's 108th birthday. Gaskin is a retired Lt. Gen. of the United States Marine Corps.

“As an original Montford Point Marine, he endured unimaginable obstacles in the segregated Marine Corps,” Gaskin said, in a statement. “Because he was a Marine, I am able to be a Marine.”

Eaglin was one of the first 300 Black recruits at Camp Montford Point in Jacksonville, North Carolina, after President Franklin D. Roosevelt issued an executive order establishing the Fair Employment Practices Commission in 1941.

Eaglin also completed two years in the Solomon Islands Campaign during the Pacific War of World War II. Later, he joined the U.S. Army as a paratrooper. Eaglin served two tours in the Vietnam War in the 1960s.

During the celebration on Jan. 12, he was surrounded by his family. Eaglin has 6 children, 7 grandchildren, and 12 great-grandchildren. 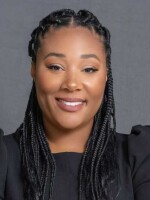