Combating the mistreatment of Black women in healthcare

In eighth grade, I listened to a speech from Malcolm X where he says:

This quote from Malcolm X has resonated with me for years.

One of the places this disrespect is apparent is in the healthcare system. According to the CDC, Black women are three times more likely to die from a pregnancy-related cause than white women.

Doula Lydia-Carlie Tilus has seen this unequal treatment firsthand. She’s an advanced neuromuscular therapist and reproductive justice activist based out of California. When I spoke to her about these disparities, she explained how there are stages before these statistics are made a reality.

“I think it's the difference between knowing the statistic is real, and seeing the statistic is real. It’s not just the point at which their lives are lost, there's a series of events that lead up to that happening,” explained Tilus. “It could be not being listened to in their prenatal appointment, it could be not having culturally competent care available to them at their hospital.”

Tilus traces Black women’s neglect in healthcare back to Dr. J. Marion Sims. He innovated the system of surgical gynecology. During the late 1830s through the 40s, he would experiment on Black women, often without anesthesia or consent.

Tilus explained how the origins of gynecology have caused trauma through generations.

“So if he's the foundation, there's a lot of unlearning, and a lot of repairing that needs to happen in order for Black women to be seen as whole human beings moving through the medical industrial complex."

Part of the repair Tilus mentions starts with unlearning racist stereotypes, like the stereotype that Black people, specifically Black women, have a higher pain tolerance than our white counterparts. Tilus described a situation where her pain was questioned. She had an intense reaction to a medication she was given for a hysteroscopy. She started cramping so severely that she was transported to the hospital in an ambulance.

“And when I got to the emergency room, the emergency room doctor looked at me and said, 'Well, they say the side effects are you could experience some mild cramping,' as if I was over-exaggerating,” she explained. “And so basically I had to advocate for myself in that space because the doctor just assumed that I was over-exaggerating the side effects of this medication I was given for this procedure.”

I've seen the neglect Tilus is talking about firsthand, especially with my mom. Producing this story made me curious. So I started asking her questions about her time being pregnant with me. She said it wasn’t easy. She had consistent heartburn, carpal tunnel in both hands, and her feet were so swollen she could only wear one pair of shoes.

I asked my mom if her doctors were there to aid her during all of these medical issues. She quickly said, "No… no, no. They gave me the arm shields for the carpal tunnel. But other than that I had to just be pregnant on my own. I don't know why they didn't [do more]. It's always been like that. It was the same way with my first child. I didn't have that support.”

My mother had a cesarean section with both me and my older brother. Although the C-section she had with me was planned, the operation was unexpected with my brother. Her doctor said she was not able to dilate, which is why he thought a C-section was necessary. I wanted to know if my mom advocated for herself in that moment.

“I was 21 and not knowing anything about the medical field like that. I didn't know. And I wasn't given the information in order to know. If I would have laid on my right side I would have avoided getting a C-section,” she said.

C-sections are a major abdominal surgery. Having one can lead to further complications, and pain after pregnancy, which may make it harder for the mother to bond with her baby. The fact that Black women, especially Black younger women, are much more likely to get a C-section is just one more example of the disparities in healthcare.

I spoke to certified nurse midwife, Venus Standard, and she described how this equity starts with educating pregnant people to advocate for themselves.

After 20 years in healthcare, Standard was tired of seeing the outcomes for Black mothers and pregnant people. In 2019, Standard joined forces with two other Black certified nurse midwives, Dr. Jacqui McMillian and Dr. Stephanie Devane-Johnson, to create a training program for Black doulas — the Alliance of Black Doulas for Black Mamas (ABDBM). The group has now trained 34 Black doulas and connected them to Black mothers in the Triangle area at no cost. For Standard, advocacy and education are key elements in saving the lives of Black women and children.

“Oftentimes, they're not getting culturally competent care, culturally sensitive care. You can't get that from a person that doesn't look like you,” she explained. “That's why it's very important to be able to have a provider or care team that understands what your situation is, that may have a lived experience that you do, that may have walked in your shoes at some point in their life, that may still be in those shoes right now.”

Doulas and nurse midwives help reduce the rate of birth complications, C-sections, and medical interventions during delivery. I wanted to see what this advocacy and culturally competent care looks like in person. So, Standard allowed me to witness a birth firsthand.

She told me birth is unpredictable; you never know what time the baby’s going to come. I was up all night waiting for her to call. The text finally came at 5:45 AM. The next thing I know, I’m rushing to the hospital hoping to make it before the baby.

I made it just in time to see the mother start to push at each contraction. Words cannot describe on an emotional level what I was going through, because it felt so spiritual. The mother’s family was right by her side, rooting her on. Standard was commanding the room, checking the monitor, and telling the nurses her needs. Seeing Standard doing all of these tasks flawlessly was amazing.

It was an empowering experience to see the mother so calm with everyone in the room, especially in such a vulnerable state. When she saw her baby after the medical staff checked everything was fine, her face lit up. You could already see the love and connection she has for her child. It was a very beautiful experience.

That made me think about my mother, and how I wished she received the same treatment as the lady I saw give birth.

Standard and Tilus say that accountability is key for change. This means holding medical companies accountable, but it also means taking charge and advocating for ourselves as Black women. Speaking to these women not only informed me but encouraged me to not be afraid to fight, to stand up for myself, and to not diminish or minimize the pain I’m in. That Malcolm X quote is so true, but it is up to us in order to change it. 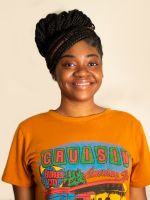 Parys Smith
Parys Smith is a Durham native and a rising Senior at Riverside High School. She loves Music, the Arts, English, and Fashion.
See stories by Parys Smith
LATEST STORIES
Elections 2022
Follow WUNC's politics team for the latest news and information about redistricting, voting, and the 2022 election.
READ MORE
Applications for the 2022 Youth Reporting Institute are now open!
Apply Now
Pauli the Podcast
North Carolina Public Radio presents Pauli, a podcast about the power of one person to change what's possible for us all.
LISTEN
Discuss North Carolina politics. Analyze how and why you love the way you do. Quiz yourself on Black history. Hear poetry from NC's poet laureate. Meet NPR hosts and reporters. You never know where WUNC's events will take you. Join us for this ride! See our upcoming events and sign up to attend.
SEE OUR EVENTS
More Stories