WUNC’s 2021 Youth Reporters turned on their microphones to collect stories from their communities. Sofía Basurto from Beaufort, N.C., took an introspective look at her Mexican identity.

I didn't really become aware of the different categories of identity until sophomore year when I was taking the pre-SAT, and they ask you about your race. That section begins with, “Are you Hispanic?”

That's the first question, and I am. But I can't give a definitive answer when it asks me about my race. All I could do then was the process of elimination. I am not Asian, I am not Black, I am not Indigenous, so the only appropriate answer was white.

Michelle Hill and I grew up here in our small, white coastal town of Beaufort. She was born in Spain, and she feels the same conflicting feelings that I do.

“My issue with it is that I feel like a fraud. It's like, can I even say that I'm Hispanic?”

“Am I just with the other white people? Or would you put me with Hispanics also? But I don't want to be like ‘Pick-me!’,” said Hill. “I don't want to invalidate other people, if that makes sense. That's where my issue is with it. I want to fit in somewhere without invalidating anyone else.”

“I watched the movie 'In The Heights' the other day. I was literally sitting on my floor crying the whole movie, one because it's just amazing and made me feel,” said Hill. “But also, because I'm so happy for them to have had their community together. I don't know that many people that are Hispanic from where I grew up, I know Sofía, Kathy, and Diana, but I'm sure there's more. I'm sure there's more but I just, I don't know them. And I'm just a little jealous. Just a little jealous, because I feel like if I had that, I would have spoken more Spanish.”

Michelle and I don't feel a sense of community living in Beaufort. And there's another element to this that doesn’t help. The cultural assimilation of this all.

Growing up, I didn’t like reading books in Spanish. I didn’t like the way they used dashes instead of quotations, and honestly just the way the story sounded in Spanish in my head was not to my liking. Reading in Spanish was hard for me then. And English books were easier and I just enjoyed them better. My mom once offered my sister and me money if we read a book in Spanish. I just never did.

“So many people have told me, my neighbors who we’ve known since we’ve moved here, that they used to see me running around you know, playing with my sister, playing with the neighbors, and only speaking Spanish that my sister or my mom would have to translate for me,” said Hill.

When you assimilate into your community, when you do that, there's a give and take between you and your environment. After a talk with her mom, Michelle realized she had lost more than her Hispanic community when she moved from Spain.

“After a few years, I guess going to public school with everyone who spoke English, my mom told me that one day, I just came home from school and I told her I don't want to speak Spanish anymore, because nobody else spoke it,” Hill said.

For me, I worry about slowly losing the cultural things of my home. Language, holidays, and meals. Especially meals. I’m trying to grasp onto these things now so I can continue my culture when I’m on my own, or I don't know, raising kids?

Right now my mom, Rocío Covarrubias, is teaching me how to make frijoladas. Frijoladas are quesadillas bathed in beans. It's quite simple but when I tried to make it, my beans didn’t heat up all the way because I was afraid of burning my quesadillas. It was pretty embarrassing.

My mom shows me how she cooks the quesadillas and beans separately, as to not burn either. The secret she explains, is to lightly cover the corn tortillas in oil before making them quesadillas, to prevent them from breaking.

To serve, you plate your quesadillas, cover them in your beans, and typically put some sour cream or whatever you have on hand on top.

Since my mom came to the states in her twenties, she views herself as exactly half Mexican, half American. Assimilation isn’t really a problem for her and she rarely thinks about her identity.

“That categorization I find from my experience, that it's just very American, very USA, trying to label people as this as that,” my mom said.

She’s right, it's an American idea to label. Like, we’ve even assimilated to the American process of labels. In other countries, it's just not a thing to categorize identity like this. In Mexico, identity isn’t summed up to several checkboxes.

“We never use that in school or in doctor's offices or on your driver's licenses. They don't have that option,” my mom said. “Okay, and so we live here, we try to follow as best as we can.”

The labels I find myself fitting into are a result of my assimilation into American culture. And it's the boxes existing in the first place that's the problem. I fit into the Hispanic box with my language, name, food, holidays, culture, and family. Apparently I fit into the white with my community, hobbies, slang, house, accent, and privilege. Basically, you can find me on Tumblr under the tags white and Hispanic. Maybe the crisis tag, too.

“You know it's funny because I think you quickly project onto yourself how others view you," my mom said. "To me I couldn't care less."

My mom, she likes to tell me I’m also half and half, with just some disparity. The American side of the balance is just a little heavier right now.

Where does that assimilation end? I don’t know. Right now I’m just doing my best to learn more about my culture. 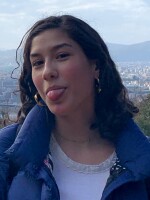 Sofía Basurto-Covarrubias
Sofía Basurto-Covarrubias is a sophomore at the University of North Carolina - Chapel Hill from Beaufort, NC. Her interest in storytelling and diverse experiences led her to explore journalism, which landed her at the Youth Reporting Institute with the opportunity to share a story. In her free time she enjoys gaming while listening to podcasts.
See stories by Sofía Basurto-Covarrubias
LATEST STORIES
Elections 2022
Follow WUNC's politics team for the latest news and information about redistricting, voting, and the 2022 election.
READ MORE
Applications for the 2022 Youth Reporting Institute are now open!
Apply Now
Pauli the Podcast
North Carolina Public Radio presents Pauli, a podcast about the power of one person to change what's possible for us all.
LISTEN
Discuss North Carolina politics. Analyze how and why you love the way you do. Quiz yourself on Black history. Hear poetry from NC's poet laureate. Meet NPR hosts and reporters. You never know where WUNC's events will take you. Join us for this ride! See our upcoming events and sign up to attend.
SEE OUR EVENTS
Related Stories
More Stories