How Global Issues At The Dinner Table Made A Cultural Anthropologist: Meet Anne-Maria Makhulu

When Anne-Maria Makhulu tells her family history, it sounds as if she is paging through a well-worn textbook in her mind, memories written in the margins next to dates and city names. And in a way, she is. Makhulu is a cultural anthropologist who teaches at Duke University. Her research work is autobiographical, she says, based on her experiences as a child of an English mother and a South African father growing up in Europe and Africa.

Her family lived in England, Switzerland and Botswana by the time Makhulu was 16. She describes it as a cosmopolitan upbringing — one filled with diverse worldviews, landscapes and people. When the family lived in Botswana in the late 1970s and early 80s, her father served as an archbishop, but he was also working to establish an underground railroad to get anti-apartheid activists out of South Africa. People frequently showed up at their doorstep, even in the middle of the night. Family dinner conversations included everything from discussions of geopolitics and activism to literature and poetry.

After a brief career as a dancer, she made the leap into academia in her 20s and began her foray into cultural anthropology. Host Anita Rao talks with Makhulu about the experiences in her childhood and upbringing that influence her work today. Her research includes studies on South Africa, the anthropology of finance, cities and space. She is the author of “Making Freedom: Apartheid, Squatter Politics, and the Struggle for Home.”

Anne-Maria Makhulu on being secular in a religious family:

My late brother was a person of very, very profound faith, as was my mother and as is my father. And I just popped out completely differently. I was a secularist from the start, and this became most uncomfortable in and around the time I went up for confirmation at age 16. … Part of the Catechism was the acknowledgement of having arrived at one's years of discretion. And so I turned this argument back on my parents and said: Well, I think I've reached my years of discretion. And I think I've decided I don't want to get confirmed. That really wasn't an option in the circumstances.

On being aware of her father’s role in anti-apartheid activism while the family lived in Botswana:

There [were] people who [were] crossing the border illicitly into Botswana … And some of them would knock on the door in the middle of the night, and my father would go and have a conversation. And we came to understand, not fully comprehending the content of the conversation, that there was a vetting going on. ... There was a little humor around this, which was if there was a lack of certainty about somebody's bona fides, the joke was: Well, we'll call a Mennonite guesthouse and we can have you put up there.

On balancing academic ideals with the world’s realities:

Because you are a critic of modern day capitalism — so you were trained in Marxism, as I was at the University of Chicago — are you really supposed to take a vow of poverty and live in poverty? This is what I often say to graduate students: You have very fine ideas, and you think about the world in wonderfully critical ways. But you're not supposed to live in a dungeon. ... And the reality is that our system, which is to say our economic and political and social and cultural system globally, implicate all of us in ways that make it very difficult for us to entirely extricate ourselves from things like supply chains. 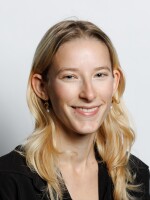 Anita Rao
Anita Rao is an award-winning journalist and the host and creator of "Embodied," a weekly radio show and podcast about sex, relationships & health. She's also the managing editor of WUNC's on-demand content.
See stories by Anita Rao
LATEST STORIES
Discuss North Carolina politics. Analyze how and why you love the way you do. Quiz yourself on Black history. Hear poetry from NC's poet laureate. Meet NPR hosts and reporters. You never know where WUNC's events will take you. Join us for this ride! See our upcoming events and sign up to attend.
SEE OUR EVENTS
Related Stories
More Stories