"I was a lonely man, in a lonely bar, in a lonely city, in a lonely world, when she came in on the devil's arm," Favourite Sons' Ken Griffin sings during the opening verse of "Hang on Girl." While the droning, driving song describes a man and woman who find each other and fight their way through the daily grind, the opening lines could just as well describe Griffin's situation as a songwriter — or simply as a human being.

The former voice and brains behind two incredible and almost wholly forgotten 1990s bands, Rollerskate Skinny and Kid Silver, the Irish-born Griffin was a New York City bartender at the turn of the millennium, carving out a meager existence, his music dreams all but snuffed out. "Justin found me lost and slowly dying," Griffin has said of his bandmate, guitarist Justin Tripp, late of the psychedelic rock band Aspera. In 2004, Griffin and Tripp, along with fellow former members of Aspera, formed Favourite Sons. The fruits of Griffin's creative rebirth can be heard on Down Beside Your Beauty, an album that, according to Griffin, "confront[s] the big stuff: love, regret, fear."

While he displayed almost operatic vocal fluctuations in Rollerskate Skinny, Griffin sounds more like Echo & the Bunnymen's Ian McCulloch during the chorus of "Hang on Girl." The music charges along in the spirit of Radio Birdman or the Stooges, reveling in the grimy spirit that inspires so much rock 'n' roll, while simultaneously crushing those dark places with words that break on through to the other, brighter side.

Listen to yesterday's 'Song of the Day.' 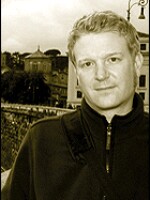 Christopher Porter
Christopher Porter is a freelance writer, editor and photographer based in Silver Spring, Md. He has a bad back and great hair. His work has appeared in Alternative Press, Entertainment Weekly, ESPN the Magazine, Inside Entertainment, Global Rhythm, Harp, JazzTimes, National Geographic World Music, Time Out Chicago, The Stranger, Vibe, Washington City Paper and The Washington Post. He blogs and repurposes junk at www.christopherporter.com.
LATEST STORIES
Elections 2022
Follow WUNC's politics team for the latest news and information about redistricting, voting, and the 2022 election.
READ MORE
Applications for the 2022 Youth Reporting Institute are now open!
Apply Now
Pauli the Podcast
North Carolina Public Radio presents Pauli, a podcast about the power of one person to change what's possible for us all.
LISTEN
Discuss North Carolina politics. Analyze how and why you love the way you do. Quiz yourself on Black history. Hear poetry from NC's poet laureate. Meet NPR hosts and reporters. You never know where WUNC's events will take you. Join us for this ride! See our upcoming events and sign up to attend.
SEE OUR EVENTS
More Stories