Some Vets Underwhelmed As Clinton, Trump Plan to Address VFW

This week, the major presidential candidates will continue a longstanding tradition of speaking to the Veterans of Foreign Wars.

The VFW’s annual summit is really less a meeting than an invasion. The group’s conventions are massive, big enough to swamp a smaller city’s accommodations. Big enough to be a small city. More than 12,000 attendees are expected here.

And they are the kind of people who vote.

Though VFW membership is down from 2.1 million in 1992 to about 1.2 million today, the group's clout in Congress and with voters remains huge, and it would be seen as folly for a presidential candidate to turn down the traditional invitation to speak at the convention.

And like much of the country, many veterans here are underwhelmed by their choices.

"I’m not voting for anybody. I’m voting against somebody," said Ed Hendrickson of Post 4809 in Norfolk Virginia, "because either one I don’t see doing a lot of greatness for us."

But it's not a slam dunk for this year's Republican nominee. Trump avoided service in Vietnam with the help of several draft deferments, and Trump questioned the heroism of Sen. John McCain, who was a prisoner of war in Vietnam for five years, and who was tortured and kept in solitary confinement.

The VFW is strictly nonpartisan, but Trump's comments about McCain angered many war veterans.

Stroud rebuked Trump publicly, as did the current commander. But Stroud now says he’s moved past the issue, and doesn’t hold it against the GOP nominee.

"With candidate Trump, it’s going to be an evolution," Stroud said.  "I think he’s evolving."

Hendrickson, however, hasn't forgotten. He says Trump "engages his mouth before he thinks sometimes."

Henderickson isn't thrilled about Hillary Clinton either. He says the former Secretary of State's improper handling of government email resonates with the veterans here whose lives sometimes depended on classified material staying secret.

Other veterans at the convention say they hope to hear specifics from the two candidates, especially about how they would reform the problem-plagued VA healthcare system. And they want it improved, not gutted or fully privatized. 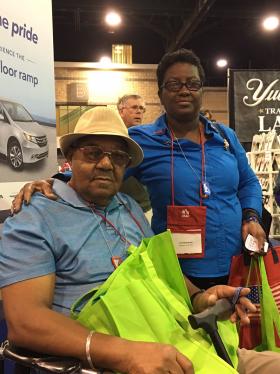 Vietnam veteran John Alexander from Post 3337 near New Orleans has leukemia, prostate cancer and heart disease. His wife Lois walked with him as he rolled around the VFW convention in a wheelchair.

They say the VA care they get is terrific, and they would never be able to afford the thousands of dollars a month in medicine the VA gives them. They don’t want to hear the candidates propose drastic changes to the VA.

Another attendee, Gulf War veteran Jennifer Smith of Lansing, Michigan, wants to hear details that she can believe,  but doesn’t think she will.

"I don’t expect to hear anything but platitudes," Smith said. "But I’m really hoping for some dynamic possibilities to address veterans’ issues."

"I have low expectations, but high hopes," she said.

As traditional veterans organizations like the American Legion and VFW lose members, younger vets are gravitating toward dozens of smaller, more specialized groups that offer a social outlet and opportunity to serve.

On D-Day, Students Bring Silent Heroes Of WWII To Life

To commemorate the 72nd anniversary of the D-Day Invasion, some American high school students are traveling to Normandy, France to make sure the victims of World War II aren't forgotten.