Youth Voters Turned Out For The Election. How Do They Feel About Results?

Youth voters came out in record numbers in North Carolina and across the nation. By the end of early voting, North Carolinians aged 18-29 had already reached 93% of their total 2016 turn out, according to data from NextGen America. More data about the impact of youth voters in the 2020 elections is still forthcoming, but preliminary analysis by the Center for Information and Research on Civic Learning and Engagement at Tufts University suggests the youth vote helped power Biden into the White House in key states like Michigan and Pennsylvania.

Stasio also talks with first-time voters about their experiences and reaction to the results. Kathleen Hablutzel is a second-year student at Smith College, and Cobey Ledford is a first year student at Wake Forest University. Youth organizer Loulou Batta also joins the conversation to talk about her efforts to get out the vote on campus. Batta is a fourth-year student at North Carolina State University who organized an event on NC State’s campus to encourage community members to vote early.

Rachel Webber on the youth turning out to vote in North Carolina despite barriers:

We face a lot of obstacles — especially college students and young voters — whether it's confusing registration requirements and residency requirements [or] whether it's lack of transportation to the polls. All of those barriers just increased with the coronavirus. ... I think it's truly a testament to youth voter enthusiasm and young voters understanding the stakes of the election — that even in that challenging election year, we still went to the polls in record numbers.

Cobey Ledford on why he feels like his vote matters:

When we look at North Carolina, we’re a swing state. It's probably going to come down to just a few thousand votes on the presidential level. But even on a local level, there's several races that are extremely close. And whenever you consider those things, I believe it becomes even more important. And I feel like you can't really complain about the system or complain about your elected officials unless you vote.

Kathleen Hablutzel on her responsibility as a voter after the election:

I think my responsibility is to keep being engaged, keep holding people accountable. Things aren't going to change overnight just with the results of an election. There's a lot of work now to be done to unite our country. This was a very divisive election.

Loulou Batta on how she started conversation about voting with her peers leading up to the election:

There was just a lot of discourse on Twitter. … And people were just deciding whether or not voting in this election was going to be impactful. We had a lot of people who thought that voting was the only way or the main way that they could get their voice out there. And then, of course, others who believe that their energy was best put into being physically out there protesting, organizing on the community level, and that voting wasn't necessarily where they thought that their energy should lie. So we were having those conversations more often than not. 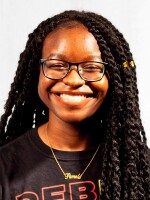 Elikem Dodor
Elikem is the intern for WUNC's "Embodied Radio Show" and previously interned for "The State of Things". She is a third-year student at North Carolina State University with a degree in science, technology, and society, and minors in Africana studies and mathematics.
See stories by Elikem Dodor