More Than Muscles: An Inside Look at Bodies, Minds and Health in Bodybuilding

Muscular builds and strict regimens are common in the culture of bodybuilding and those in the sport navigate how bodybuilding impacts their relationships with their bodies and mental health.

If you’re new to bodybuilding, you might first think of Arnold Schwarzenegger. But who are the real people behind the sport? Bodybuilding combines fitness with an intense focus on muscular physique. This constant focus on the build of one’s body can create obstacles that bodybuilders endure throughout their training — from muscle dysphoria to the usage of performance enhancements.

Host Anita Rao speaks with bodybuilders to learn more about how the sport impacts their lives, including gender identity and health. Coryne Butler is a bodybuilding lifestyle and transformation coach at FitBody Fusion, and Tommy Murrell is a former bodybuilding competitor and personal trainer. Bodybuilders Joshua Langbein, Luke Nathan, Elijah Busier, Alex Tilinca and Alex Edwards also add their voices to the conversation.

Rao also talks with Embodied intern Anthony Howard, who produced this show. Howard talks about his own personal fitness journey and why the topic of this show resonated with him.

Also joining the conversation is James Leone, a professor of health and kinesiology at Bridgewater State University. Leone discusses the long-term physical and mental health effects of bodybuilding.

I went through a lot of breakups, suffered from depression, anxiety, so I found my way into the gym. And in the gym, it taught me how to deal with things physically, but my mind grew as well.

Joshua Langbein on how bodybuilding helped him overcome his past hardships.

Coryne Butler on how watching superheroes led into her love for bodybuilding:

When I was growing up as a little girl in the 90s, I was watching the old school X-Men cartoons — like Storm and Rogue and Jean Grey and Mystique — they all looked really cool. I was like: I want to look like that. And so that kind of set the scene all those years ago, and when I discovered bodybuilding I was like: That is how I can obtain the physique that I’ve wanted since I was five. And I think that’s what kind of really spoke to me, and I was like: I want to be awesome like them. Obviously I don’t have superpowers like that, but we can all pretend.

Tommy Murrell on competing in bodybuilding as a trans man:

I have this rule in life where if something really scares me, and I don’t really have a real reason to be scared, then I’m gonna go do it. So I didn’t tell anyone that I was trans. I didn’t want to go in with either an advantage or a disadvantage — that’s not the way that I approached it. I just approached it as if it were something that I needed to do. I got a coach. I let my coach know that I was trans. He’s like: I know, I don’t care. And he pushed me to no end, and I fell in love with that. I fell in love with prep. I fell in love with, as crazy as it is, waking up at four o’clock in the morning, and doing my cardio. Coming back to the gym, the structure — everything was a love for me. And then looking at my body and being like: You know what, sucker, this is what you’ve been thinking about being and how you saw yourself in your mind since you were seven years old.

James Leone on how physical performance can have mental health effects on bodybuilders:

With many other sports, the outcome is external to the person. It’s how hard you can hit a ball, or how accurate you are at putting a ball in a goal. … With bodybuilding, it is directly you. It’s your body. The body is on a stage for performance, for evaluation, for critique, for praise. The internal processes — right, so, kicking a ball far — certainly, it requires skill. It requires a certain level of power or performance, but it’s over once it’s over. The bodybuilding world, and competitions that go along with that, really stress the before — the preparation phase, the performance phase — and then the after effects phase. 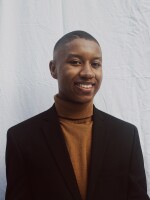 Anthony Howard
Anthony Howard, a junior at UNC-Chapel Hill and the fall intern for Embodied, is currently majoring in media and journalism at UNC's Hussman School. He has interests in creative writing, musical theatre, and fashion. Whether it be writing for The Daily Tar Heel as an arts & culture staff writer or listening to the latest Megan Thee Stallion, Howard is excited to broaden his experience with Embodied and create impactful storytelling.
See stories by Anthony Howard