Beyond Beautiful: The Politics Behind Your Makeup

Makeup has a fascinating history with ties to social justice movements. Products like lipstick and eyeshadow are used in many contexts for a variety of reasons, all of which connect in some way to power.

A quick search of YouTube reveals that there are countless methods for applying the perfect wing tip eyeliner. What’s not as obvious: the history of makeup extends all the way back to ancient leaders like Cleopatra, and it has played significant roles in women’s suffrage, World War II, and pre-Stonewall era New York.

Host Anita Rao uncovers the surprising and fascinating history of makeup with three guests, each of whom has a unique relationship to the world of cosmetics. Rae Nudson is the author of “All Made Up: The Power and Pitfalls of Beauty Culture, from Cleopatra to Kim Kardashian.” Her reporting provides a detailed look into the history and culture of cosmetics. Dawn Mitchell is a licensed cosmetologist, the founder of the beauty and skincare line Pretty Til Dawn, and a diversity and inclusion strategist who has assisted makeup companies in diversifying their color palettes. Natasha Noir Nightly is a bearded drag queen based in Asheville, NC, where she is the mother of the Temple Nightshade drag house, the 2018 winner of the Miss Blue Ridge Pride pageant, and an advocate for the LGBTQ+ community.

Also part of the episode are voice memos from listeners Abbie Amabisca, Star Sirius, and Logan Cantin, who demonstrate that makeup is used by people of all genders for a wide range of purposes and in a variety of contexts.

The Power and Politics of Makeup, As Told by Four of Your Go-To Products

A bold, red lip makes a statement. But like with any makeup product, the message it sends changes from era to era, culture to culture, and wearer to wearer.

During World War II, an increasing number of American women began working in factories, where a white woman sporting an ultra-feminine red lip was considered a symbol of patriotism and commitment to the troops. The U.S. government allowed companies to keep manufacturing makeup even as many other production efforts were diverted because of the war. However, this same red lipstick was interpreted differently when worn by a woman who wasn’t white.

“Women of color who wore red lipstick in the United States were often seen as oversexualized, as improper, as too independent,” says Rae Nudson, author of “All Made Up: The Power and Pitfalls of Beauty Culture from Cleopatra to Kim Kardashian.” “So [red lipstick] became a way for society to maintain whiteness as the ideal and to reinforce respectability politics in different cultures and different places.”

Before the debut of Rihanna’s makeup company Fenty Beauty in 2017, it was difficult for non-white people to find foundation that matched their skin tone.

For Dawn Mitchell, a Black woman who began wearing makeup in the 1970s, creating makeup that complemented her skin required time and creativity: “The tans and the darks that were out there didn't have the proper undertones, so I would need to mix various shades to add some yellow,” she says.

Fenty Beauty changed the game by coming out of the gate offering 40 different shades of foundation. After that, other makeup lines began to follow suit. Dawn has helped many makeup lines expand their color palettes in her work as a diversity and inclusion strategist, and she credits Fenty for paving the way: “It's like [Rihanna] struck a match and threw it into the beauty world and said: Now start over and do it this way.”

Although blue eyeshadow is generally considered to be a bold makeup choice, this product has historically been used as a subtle form of communication among members of the LGBTQ+ community. In the decades that preceded the Stonewall Riots, gay men wore blue eyeshadow in certain New York cafés as a means of identifying themselves to others who shared their identity.

In the specific context of these cafés, straight people would not have seen fellow patrons’ use of blue makeup as out of the ordinary, but for other members of the queer community, it sent a very clear message. As Nudson explains, “Blue makeup became kind of a signal to say: I'm part of this community. Are you? Do we belong here, and do we belong together?”

Makeup is all about power. Prominent figures, like political leaders and royalty, have long set makeup trends; cultural norms about how makeup is read on different bodies are put in place by those with social status and privilege. But makeup is also a tool folks take into their own hands and play with to discover what feels most personally empowering. When Dawn Mitchell began experimenting with makeup as a young woman, she found that she especially loved winged eyeliner because of the way it made her feel.

“I called it the cat liner, which today is the winged liner, because it made me feel like a tigress,” she says of her signature look at the time. “And so when I would put it on, I would use it as a way to express that this is how I'm feeling, like I can accomplish anything.”

As with all makeup products, the way eyeliner is used differs depending on context. Stage performers use eyeliner to ensure their eyes are visible from a distance, but for drag queen Natasha Noir Nightly, learning to paint for an audience was a long process. “I’ve been told that when I first started I wasn’t wearing enough makeup,” she says. “But as a drag queen, we say that you paint for the people in the parking lot — you don't paint for the people in the front row.” 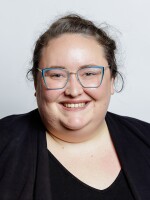