The Tech – and Stories – Behind Our Bras

You’ve likely heard the statistic that 80% of bra-wearers aren’t wearing the correct fit. Finding the “right” bra means negotiating a tricky balance of form, aesthetic and function — not to mention the cultural baggage associated with breasts and the garments that support them.

Host Anita Rao speaks with four guests about the history, design and cultural narratives that surround the brassiere. Lisa Lindahl, author of “Beauty as Action” and “Unleash the Girls,” tells the story of how she invented the sports bra and describes its impact on the worlds of sports, fashion and feminism. Bra expert Jené Luciani Sena, author of “The Bra Book” and “Gigi Gets a Bra,” describes the experiences that led her to become interested in bra fit and design and explains her recent role in developing the U.S. Army’s first ever Tactical Brassiere.

Rao then hears about the connections between bras, body image and gender identity. Destiny Liley, a freelance content creator based in Arizona, talks about her experiences of shopping for bras as a larger-chested person and going braless for a week at the beginning of the pandemic. Ren Gutierrez, an advocate for queer and trans mental health, shares what it was like to go through their old, unneeded bras after having top surgery.

Thank you to Ashley, Caitlin, Adele Jenni and Audrey for contributing voice notes for this episode.

The History of the Sports Bra

Team Embodied can’t remember a time before the sports bra — and it turns out that it’s been around for less than 50 years! Read on for more facts and photos related to the invention of the sports bra.

This original prototype of the sports bra from 1977 was constructed from two jock straps sewn together with the straps crossed in the back. Because of this design, the original name for the product was the Jockbra, though the designers eventually changed it to Jogbra.

Lisa Lindahl came up with the idea for the sports bra as a way to address the discomfort she was experiencing during her daily runs. Lisa and co-designer Hinda Miller (née Schreiber) model the Jogbra in this late 70s magazine ad.

The Jogbra hit the market around five years after the passage of Title IX and had a profound impact on the sports world. This photo is of a Jogbra designed for the 1996 Summer Olympic Games in Atlanta. 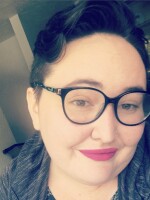