Aquaculture along the coast of North Carolina is a growing business.  The oyster industry in particular was looking at a banner season this spring before things came to a stop with the pandemic.

Evan Gadow starts up his flat-bottomed boat and begins his daily 15-minute ride to Stump Sound on the North Carolina coast. The morning sun is shining. The world of oyster harvesting looks bright.

“It's been good. There seems to be a really big appetite for, for local seafood and especially local oysters, because they're so sustainable and there's been such a push for a sustainable farm to table seafood that you can trace back to the source.”

Gadow is co-founder and co-owner of Three Little Spats Oyster Company. They sell oysters to restaurants across Wilmington, down to Savannah, Georgia. Richmond, Virginia. Asheville, and points in-between.

Napa Valley has its wine. North Carolina has its shellfish.

“And North Carolina wants to do kind of the same thing with oysters, because we've got such a variety of coastal waters and that variety, creates a variety of different flavor profiles and oysters. So, you know, a Stump Sound oyster is going to taste a whole lot different from a Topsail oyster, and it's only a couple miles away and that's just a microcosm of the miles and miles of shoreline that North Carolina has.”

Marine scientists believe that the regional shellfish aquaculture industry is on the cusp of greatness. If it hasn’t arrived already.

And Stump Sound is about perfect. Gadow and his crew lease 55 acres.

“So one of the reasons that Stump Sound oysters are so renowned in the area is just because - as opposed to an area that has too much fresh water, too much salt water - just like with anything you don't want too much of one, one thing too much of one good thing makes it a bad thing. So here we have an excellent balance of salty and fresh water that really gives it a depth of flavor that you don't find in a lot of other regions.”

But the tumbler that sorts oysters on a small dock went quiet in March. That’s when the restaurants closed. And the oysters business with it.

“Yeah, I mean it. When they closed the restaurants that really freaked me out, cause I had never seen it. I mean, nobody's really seen anything like this before. And you know, with restaurants being our primary revenue stream, it was like well, dang, there goes our money.’’

But as thing slowly opened, so did the oysters. Gadow says they have all the restaurants back.

“So as soon as the restaurants are backed up, or opened back up, that was one of the biggest, a couple of weeks we actually had in our history, because people were just so eager to get back out everybody.”

The company is still waiting on one restaurant to return. Until this spring, Three Little Spats had been selling oysters to the Grand Central Oyster Bar in New York City. Open since 1913 and arguably the most famous oyster bar in the country. They remain closed. 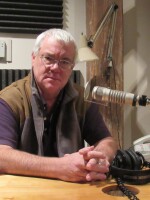 Vince Winkel
Vince Winkel joined the WHQR news team in March, 2017. He had previously been covering business and economics for the Greater Wilmington Business Journal.
See stories by Vince Winkel
LATEST STORIES
Pauli the Podcast
North Carolina Public Radio presents Pauli, a podcast about the power of one person to change what's possible for us all.
LISTEN
WUNC Events
Discuss North Carolina politics. Analyze how and why you love the way you do. Quiz yourself on Black history. Hear poetry from NC's poet laureate. Meet NPR hosts and reporters. You never know where WUNC's events will take you. Join us for this ride! See our upcoming events and sign up to attend.
SEE OUR EVENTS
More Stories