In Youngstown, Ohio, Clues About What Operation Legend Will Look Like

When someone fires a gun in Youngstown, Victoria Allen usually hears it — at least on her phone. Allen, who runs the ICU Neighborhood Watch group on Youngstown’s south side, has access to the city’s Shot Spotter app, which records the sound, time and location of gunshots.

On a recent August weekday, Allen was driving to a house that was the site of at least two shootings in the last two days.

“Somebody just drives by, they light it up. There’s people in it, they shoot back,” Allen said as she pulls onto the shoulder of a residential street down the block from the house. The first shooting was a little before 5 in the afternoon the day before, so she parks down the street right at 5 p.m.

“I just try to go be the voice of reason, you know?” said Allen. “At least be a perfect witness if something happens: It was this car, this license plate.”

Allen is a 48-year-old mother of three who works for a home security company and has lived on Youngstown’s south side her whole life. She started the neighborhood watch in 2010. It’s just her, or sometimes her and one other person, keeping an eye out for crime and working with the Youngstown Police Department when something happens.

As she sat on this residential street pockmarked with empty lots where abandoned houses have recently been torn down, kids pass by riding on bicycles. And young men slowly drive by, looking at who’s sitting in the car on the side of the street.

Allen grew up here and raised her kids here.

“It’s not the whole, entire neighborhood is unsafe,” Allen said, “it’s just a few bad apples spoil it for everyone.”

Over the years, Allen has seen law enforcement programs designed to improve the neighborhood come and go. Often, they come in the form of partnerships between local and federal law enforcement agencies.

When President Donald Trump announced Operation Legend, a plan to send federal agents into cities around the country, it stirred a hornet’s nest of controversy. But in fact, federal-local partnerships are old practice. Youngstown has been home to many of them and may offer a preview of what cities like Cleveland and Kansas City can expect.

Over the years Youngstown has seen Operation Weed and Seed, V-GRIP and Operation Steel Penguin, just to name a few. There’s a permanent federal — local partnership known as the Mahoning Valley Violent Crimes Task Force and the city sits in a High Intensity Drug Trafficking Area, as designated by the U.S. Drug Enforcement Administration. All this means federal money and resources flow through the city every year.

In addition to money going to local law enforcement to pay for increased patrols, federal agents from the FBI, DEA, ATF and U.S. Marshals Service are assigned to the region’s violent crimes task forces to help bring federal gun or drug charges or arrest fugitives.

Allen says she sees the difference in her neighborhood when these programs are launched.

“Usually when the state troopers come out, it’s quiet as a church mouse on the streets,” Allen said. “You can hear a pin drop. Nobody’s out. Nobody’s doing anything.”

But eventually, the money dries up, the task forces slip away and, Allen says, things go back to normal.

The current model of local-federal law enforcement partnership goes back to at least the Safe Streets Violent Crime Initiative in 1992. But the use of federal resources to combat violent crime has received new attention in the wake of protests in Portland.

In July, demonstrations against police brutality in Portland took a heated turn after federal agents from the Department of Homeland Security detained protesters, in some cases blocks from the federal building officers were there to protect. Tensions in the city escalated, nightly protests grew more confrontational and eventually the federal agents were forced to withdraw.

Trump stood behind the deployment and soon after announced Operation Legend, a plan to send federal agents to cities including Chicago, Kansas City and Cleveland. The president’s critics quickly connected the announcement to the violence in Portland.

Cleveland’s Democratic Rep. Marcia Fudge called sending federal agents to Cleveland unconstitutional and an attempt by Trump “to intimidate and silence those who oppose his policies.”

But this deployment, unlike in Portland, was meant for everyday law enforcement activities.

In Kansas City, Missouri, where Operation Legend started, Mayor Quinton Lucas said he never approved the federal agents coming to his city and only learned about it on Twitter. Then he said a staff member had approved it and he will continue working with it.

U.S. Attorney General William Barr recently visited Kansas City to announce that there had been 1,500 arrests nationwide since the program’s launch.

Jimmy Hughes, former Youngstown police chief and current city councilor, says the city has been involved in federal law enforcement task forces for as long as he can remember. He questioned the policy while he was with the department and is still skeptical now that he’s on the council.

“We’re going to accept money, start a program, saturate Black neighborhoods and to do what? Stop people that you have zero information about are criminals, or involved in anything,” Hughes said. “The thing is to stop as many people as you can, any reason that you can, you let nothing go by. And you want guns, guns, guns.”

He said there were exceptions, however. In the 1990s, the FBI helped bring down a gang in Youngstown called the Ready-Rock Boys.

“And there was no more Ready Rocks after that,” Hughes said. “And it was a significant thing with our population. I’ll give you that.”

But the federal presence appears to have become a permanent fixture in Youngstown with an office, a website, and permanent staff. That, says Hughes, led to pressure to accept federal money, sign on to the next initiative and detail some of his officers to it.

“I’ve been threatened by the FBI and agents in charge that if I [reassign local police], they’re going to leak to the public that I’m not interested in reducing crime and using the feds,” Hughes said, adding that he wasn’t above playing along. “My boss needs to get reelected. I need, if I want a job, I need to help him get reelected. And everybody seems to jump for the numbers.”

The FBI did not make a current member of the task force or local agent available for an interview.

The Keys To Lasting Change

Focusing law enforcement on particular areas where crime is highest and on the individuals at the center of the crime has been shown to reduce crime and violence. But, according to Cassandra Crifasi, deputy director for the Center for Gun Policy and Research at Johns Hopkins University’s School of Public Health, communities must make continuing investments to see long-term reductions in violent crime.

“Meeting the needs of those communities through services and resources and sustained investment can be a really impactful way to prevent violence in these communities,” Crifasi said.

She pointed to programs like Cure Violence and Advance Peace as successful examples.

While Operation Legend is fairly new, and there aren’t many details about how it will be used in the cities involved, Crifasi doubts that those types of strategies and community support are going to be part of it.

“I think it’s far more likely that we’re going to see the same heavy-handed tactics that police have been using for years, Crifasi said. “And those are the tactics that you know to some extent got us here in the first place — these tactics of aggressive policing.”

The local-federal law enforcement model appears to be understudied. It’s not clear that the task forces In Youngstown, for instance, have had a lasting effect. According to the FBI’s Uniform Crime Report, there were 21 murders in Youngstown in 2018. That’s almost twice as many as the city had in 2016 but the same number as in 2009.

Anecdotally, former Youngstown Police Chief Jimmy Hughes said he couldn’t think of any task forces being launched in largely white neighborhoods during his decades on the police force.

“Really it’s nothing but a driving-while-Black initiative when you do it in a Black neighborhood,” Hughes said. 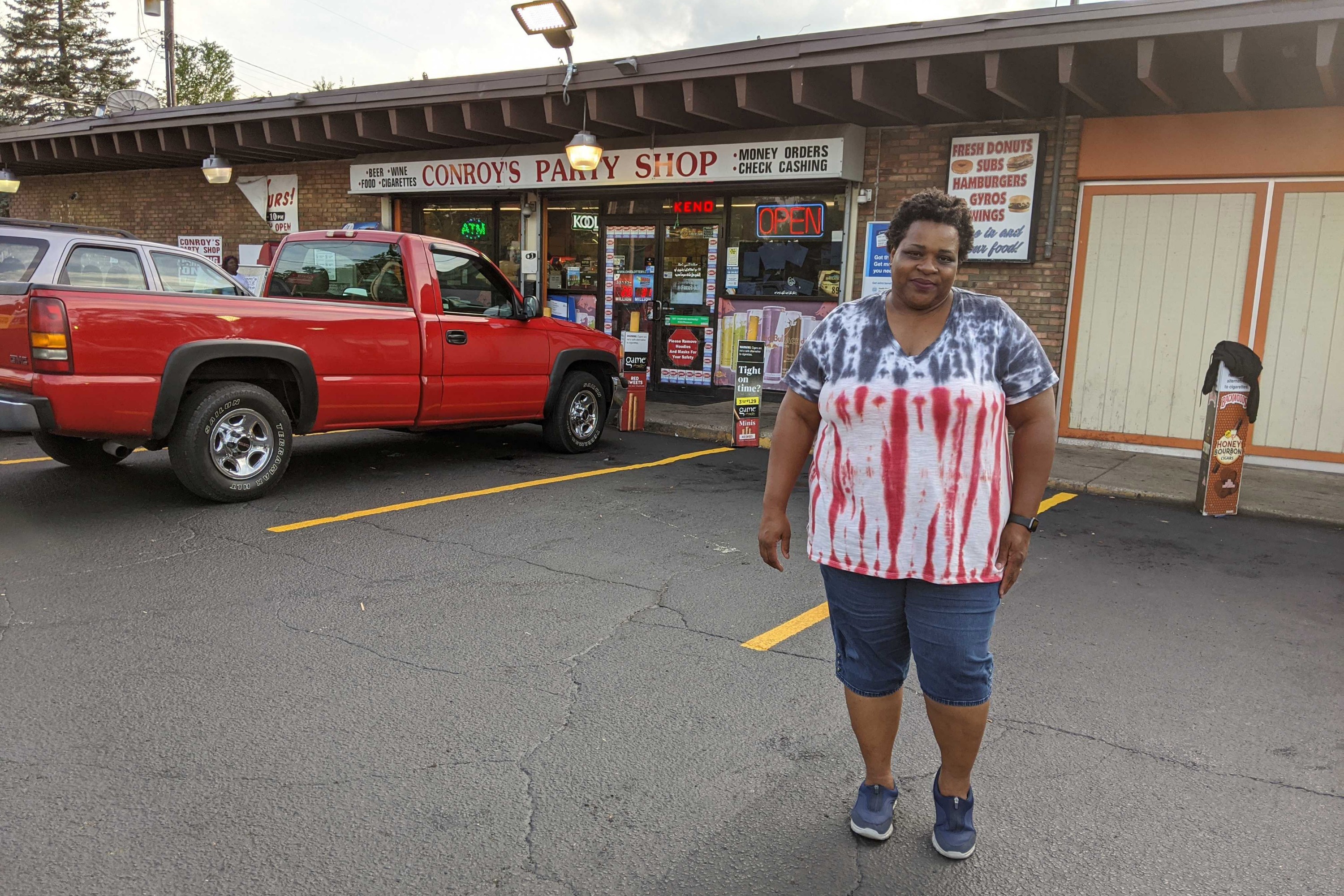 Victoria Allen outside a convenience store on Youngstown’s South Side. Allen has spend the last 10 years running a neighborhood watch.

In Boardman, a township of about 40,000 people 5 miles south of Youngstown, six of the 60 officers in the police department work full-time with federal task forces. Chief of Police Todd Werth is a retired FBI agent who spent 15 years working in Youngstown.

According to Werth, the federal government provides long-term support for those task forces — paying overtime, providing a vehicle, equipment and training. Local agencies provide manpower. Then there are short-term grants, like the $60 million that went to cities through Operation Legend.

Werth disputes the portrayal of federal agents as outsiders being sent into cities against the wishes of locals.

He said outside agents can be called in when there’s a larger investigation that requires additional resources. Federal agents are not conducting traffic stops.

“But they might be with a task force officer who has that local jurisdiction,” said Werth. “And then part of that is the subsequent violations, looking for guns and things like that. And I think our community welcomes that.”

A federal prison sentence for illegal possession of a firearm is years longer than the state sentence in Ohio. It’s this charge, known as possessing a weapon under disability, that bothered former Hughes the most. He argued that sending someone to federal prison when you find a gun during a traffic stop is excessive punishment.

“You have to show you are competent,” Werth said. “A weapons under disability charge has to do with that person’s previous conduct. They’ve engaged in previous conduct and been convicted of previous conduct, usually based on some kind of violent act, that they shouldn’t be in a position to have a gun.”

Werth said the FBI and ATF do target violent individuals. He agreed that community outreach is the best way to keep a successful violence reduction program going. Federal initiatives over the years have included community outreach elements, like community beautification and block parties, but those are hard to keep paying for.

“You sit in this position I am in now and you become half-bean-counter,” Werth said. “I need officers on the street, that’s our bread and butter — response to calls.”

In Attorney General Barr’s Operation Legend announcement, there was no mention of community engagement, only money for enforcement

Guns & America’s Lisa Dunn contributed to this story. Guns & America is a public media reporting project on the role of guns in American life.

In late May, a Waffle House employee in Colorado was shot and wounded. The reason? A patron allegedly grew angry after the employee told him to wear a mask, according to multiple reports.

The latest round in the fight over lead ammunition is working its way through Congress.

A bill introduced in July by Rep. Ted Lieu (D-CA) would ban lead ammunition on U.S. Fish and Wildlife Services land. The agency is responsible for administering national wildlife refuges, which cover 95 million acres across the country — much of that prime hunting ground.

Kamala Harris Advocated For Stricter Gun Laws As A Candidate. What About As Joe Biden’s VP?