As The Army Grows More Diverse, It Faces A Shortage of Chaplains

The military has made progress diversifying its chaplain corps. But it faces a shortage of chaplains of all faiths.

Key drops in to his weekly inspirational gospel service, takes the pulpit, and delivers a quick greeting to the congregation. Then, during a hymn, he jumps in his car, drives to another chapel on the other side of the base, and gives a guest sermon at a contemporary Protestant service.

He's an energetic and literary preacher, quoting both the Bible and Langston Hughes and urging parishioners to use their talents for good.

What Key’s doing—preaching to Christians like him—is just one part of an Army chaplain’s job.

"I have a number of colleagues who come from different faith groups," Key said, "and we get the opportunity to serve soldiers and their families together." 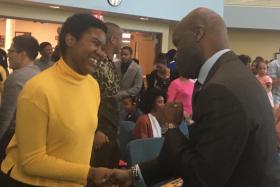 There's nowhere else besides the military, he said, where you get to be part of your congregations' job site.

"We call it ministry of presence," said Army Chaplain James Dice. It's this idea that a chaplain is always present in our unit, caring for soldiers, assessing their needs, and getting to know them."

Dice works in the Pentagon, recruiting clergy to the chaplain corps. It's a constant challenge.

"There is still a shortage of chaplains on active duty and in the National Guard," Dice said.

That shortage is particularly acute among Catholic priests. The Catholic church now provides incentives for priests to join the military, such as paying for half their religious education. Dice said the Pentagon may decide to provide some additional incentives of its own for chaplains of all faiths.

But the job carries unique responsibilities that don't appeal to some faith leaders.

Chaplains train with soldiers. They don’t carry weapons, but they do deploy to war zones. And they're expected to minister to the needs of all service members, not just the ones who worship in the chaplain's denomination.

"We're not compromising our personal denomination integrity," Key said, "but we are creating space so others can practice their particular faith."

If chaplains feel their faith doesn't allow them to fill a soldier's particular need, they're expected to direct the soldier to someone who can.

That's the issue in a current controversy at Fort Bragg, N.C., where a Baptist chaplain faces possible sanctions. The Army found that he didn't allow a same-sex couple to attend a marriage retreat. The chaplain is challenging the Army's conclusion, saying he tried to find another chaplain to take over the retreat.

Lans remembers helping a soldier with an earth-based religion honor the spring solstice. It wasn't something he was used to doing as an Orthodox Jew.

"But it wasn't totally strange either," Lans said. "I think if anything, you're able to look inside yourself and say, 'How can identify with this person and where they're at?'"

Chaplain Key said that if a soldier comes into his office to talk about a problem, "it's not the time to pull out my good old Baptist one-two punch." Only if a soldier expresses interest in a chaplain's religion, he said, it would be appropriate to bring it up.

A native of Louisiana, Shabazz grew up Lutheran before converting to Islam as a soldier. A few years later, another chaplain suggested he pursue the ministry.

“It was like a light went off from heaven, no lie,” Shabazz said. “It was at that moment I found my calling to be who I am.”

Now his duties include leading Friday prayer services on base. In a plushly carpeted room, Muslim soldiers leave their boots at the door and orient east towards Mecca.

It hasn't been easy. Shabazz said he has encountered resistance at every rank, at every base. And he remembers one particular commander.

"The commander said 'Hey, I'm sure you're a nice guy, but we don't like how your religion treats women, have a nice day,'" Shabazz said. "He didn't speak to me for nine months."

So Shabazz did his job: caring for soldiers. He'd play basketball with them, go to training. And the commander noticed and eventually apologized.

"He came in front of the battalion and he was in tears. He said 'I have wronged one of the officers in my formation. He is a great officer and a good man.'"

Moments like these, Shabazz said, allow him to change people's perceptions of Islam. He also advocates for Muslim soldiers, makes sure they can pray during the work day, fast during Ramadan, and eat halal. If soldiers struggle with the idea of going to war in a Muslim country, Shabazz helps them make sense of that.

"One of the things that's fascinating -- it's in the Koran and the Bible -- is that if you're aggressed and you're defending, you have the right to fight," Shabazz said.

Having a place to worship at Joint Base Lewis-McChord has been important for Muslim soldiers such as Heman Drmnao, who is Kurdish and served as a translator in Iraq. He moved to America and joined the Army because he believed in it, but he said he felt like a foreigner.

But Shabazz doesn't just serve Muslim soldiers. Specialist Brittney Echols is Christian and said Shabazz has been a trusted confidante as she's navigated questions about her work.

"Because of him, he made me feel like my life had value, and it had an importance to it, so I really can say that I respect him for that," Echols said.

In all those conversations, Echols said, Islam has never come up.

For Chaplain Shabazz, it boils down to one idea: "I'm just a guy from Louisiana, and I meet people where they at."

Anna Boiko-Weyrauch contributed to this report.