#NPRreads is a weekly feature on Twitter and on The Two-Way. The premise is simple: Correspondents, editors and producers from our newsroom share the pieces that have kept them reading, using the#NPRreads hashtag. On Fridays, we highlight some of the best stories.

This week, we bring you four items.

#NPRreads: “Just being in Paris…had made them better prepared to understand the human condition” The Greater Journey #DavidMcCullough

As the terrorists struck in Paris, I happened to be reading The Greater Journey by David McCullough — a book about French civilization and how it inspired great works of art and science by Americans in the 19th century. The contrast with the barbarity of the murders was stark.

The book starts from the assumption that the new United States hadn't yet developed the institutions and mindset to inspire painters, sculptors, authors, architects and physicians.

It traces the paths of Americans to Paris, where everyone seemed to know they needed to be. Some got there on unlimited funds from their parents, and others on scraped-together pennies. All left enriched.

McCullough doesn't ignore the dark side of 19th century Paris, but the creative spark is what dominates — and that was a welcome relief from the current-day violence.

#NPRReads I was held hostage by Isis. They fear our unity more than our airstrikes | Nicolas Hénin https://t.co/UvgaWh7mJC

This essay from Nicolas Henin, once held captive by ISIS, gives some small insight into the mind of the hostage-takers.

Henin tries to help the reader understand why ISIS doesn't care what the rest of the world thinks about it.

I imagine that most of us don't love going to the doctor. The prospect of feeling better is what drags most of us to secure an appointment. Having steeled ourselves for the occasion, you can't help but feel rushed through in just a few minutes.

Two points jumped out at me, even though the first is fairly obvious:

Then this farther down:

"Studies show that the most satisfied patients are the ones who spend more time with their doctors than they expected, regardless of the visit's actual duration."

If we show up with low expectations, we can only be surprised and feel better about the experience. Ideally, we actually feel better too.

this will be useful if indeed happens! 3G by #Palestinian cell cos agreed by #Israel https://t.co/AoWjZOgys6 #NPRreads

When I read this brief piece, I remembered meeting young Palestinians at "TechCamp Ramallah" in 2013, a conference sponsored by USAID and a local phone company. They gathered for a couple of days at a hotel to do what people do at loads of such gatherings do all over the world: invent things.

The first thing a young woman named Rasha said when I asked her to explain her mapping project to me was, "You know, 3G is not available. So we're working on a 2G solution for navigation." In short, they were inventing mobile apps that would only be fully functional when the user was connected to a Wi-Fi, not cell, network — so, not really mobile.

3G is cell technology that allows for fast enough data transfers to support smartphones. A 2G cell network has limited data capabilities. The economic impact of the Palestinian situation has been well-documented, including in the context of the larger economy, but any real strategic value Israel has had for limiting Palestinian cellphone development has never been entirely clear to me.

Israeli news reports on the announcement pointed to recent remarks by Israeli Prime Minister Benjamin Netanyahu saying he is looking for practical ways to lower tensions, after two months of increased and deadly violence, much in the West Bank. Secretary of State John Kerry has been pushing for this, and he is due to visit soon. So the tea leaves of high-tech here roll on.

Meanwhile, as I tweeted, if this really does happen, it will be useful! For anyone, including me, who spends time in Palestinian cell-coverage areas.

Emily Harris
International Correspondent Emily Harris is based in Jerusalem as part of NPR's Mideast team. Her post covers news related to Israel, the West Bank and Gaza Strip. She began this role in March of 2013.
See stories by Emily Harris 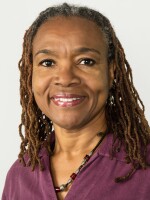 Carline Watson
Carline Watson is the Talent Development Manager for NPR News and Programming. In this role, she is the primary day-to-day point person for temporary staff in the News and Programming division at NPR.
See stories by Carline Watson
Barbara Campbell
LATEST STORIES
Pauli the Podcast
North Carolina Public Radio presents Pauli, a podcast about the power of one person to change what's possible for us all.
LISTEN
WUNC Events
Discuss North Carolina politics. Analyze how and why you love the way you do. Quiz yourself on Black history. Hear poetry from NC's poet laureate. Meet NPR hosts and reporters. You never know where WUNC's events will take you. Join us for this ride! See our upcoming events and sign up to attend.
SEE OUR EVENTS
Stories From This Author