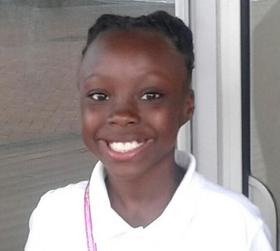 A city council meeting following the fatal police shooting of Keith Lamont Scott last year was out of control at times as a long list of residents spoke, calling for justice. And then there was this 9-year-old, Zianna Oliphant who grabbed everyone’s attention.

One Year Later: Anniversary of the Keith Lamont Scott Shooting and Protests

Her testimony went viral on the web, in newscasts and Zianna was interviewed by local, national and international media outlets about that speech.

Last week, Zianna was on the Boardwalk in north Charlotte, where she comes often with her mother and big brother. The personable, petite 10-year-old, with braids and an infectious smile, made friends with a couple feeding the ducks as her mother looked on.

“I like those ducks with the green cause it's more pretty and blends in good,” she told them.

In recalling the city council meeting, Zianna says she was shaking and had butterflies in her stomach the night she spoke to the council. She was determined to make her feelings known and says she’s glad she did.

But Zianna didn’t expect what came next--interviews on network news shows, the BBC. All of a sudden she was everywhere

“I was like it’s just a speech that came from my heart and I think it’s normal, go to sleep, wake up, but the next day my momma’s phone is just ring, ring, ring somebody texting her and calling her for interviews. I didn’t expect it to go that crazy,” Zianna said.

Her mother Precious Oliphant says they get recognized when they’re out in public all the time and that people show her daughter a lot of love. She says she’s seen a big change in her daughter over the past year.

“Zianna became so courageous, so brave. It gave her a boost of confidence because so many people were reaching out to her and telling her how special and amazing and beautiful she is,” Precious Oliphant said. “Now she knows how important it is to stand up for herself.” 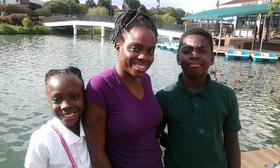 And for others, Zihanna says. After seeing protests on the news following the fatal Keith Scott shooting and hearing of police shootings in other cities, Zianna says it made her want to join the protesters.

“I got so obsessed with it and wanted to protest because I understand that the police have to do their job but it’s not their job to kill innocent black men but I don’t understand what’s wrong with this world now,” Zianna said. “Years ago, it was not like this. It’s something that done irritated the police and it’s making them kill innocent black men.”

Zianna says she does not think things have gotten better over the past year and she still has mixed feelings about police officers.

“I met this one police officer, from the commercial, the basketball cop and he’s pretty generous and a happy person but any other ones, I still feel the same. I just don’t, uh, uh,’ Zianna said.

Last year Zianna spent a week in New York shooting a Microsoft commercial on positivity that she was prominently featured in.

She also traveled to Florida to participate in a youth forum with police officers. When asked if she gets afraid when she sees a police officer, she said, “Nope. I stand proudly and I have confidence in myself. I’m not gonna let nobody bring me down, no matter what they say. I will keep on going, walking confidently, holding my head up."

Zianna has met a lot of local leaders, members of the Charlotte Hornets and formed a bond with the coach, Steve Clifford. She even met Hillary Clinton during a presidential campaign visit to Charlotte.

“I didn’t really enjoy it (meeting Clinton) that much because like she left without saying anything. All she came and said, sit down and brought me up to the stage to take a whole bunch of pictures and didn’t talk to me. I was kind of disappointed,” Zianna said.

That’s understandable for someone who wants to be the first female president one day. But for now, Zianna is concerned about Charlotte and says she hopes local police will work closer with communities and treat all citizens justly. Her message as the anniversary for Keith Scott's fatal shooting nears, “What I’d like to say to the people that are marching, keep marching until we get equal and treated the same way as other people are treated and never stop fighting for who we are.”

With the requests for interviews still pouring in it’s a wonder Zianna has time for just being a 10-year-old child. No problem she said.

“Absolutely, I think I can hang on to that,” she said.

No Charges In Keith Scott Shooting

Listen
Listening...
/
CMPD officer who fatally shot Keith Scott in September will not be prosecuted.

No charges will be brought against Charlotte police officer Brentley Vinson in the September fatal shooting of 43-year-old Keith Scott. Mecklenburg County District Attorney Andrew Murray made the announcement at a press conference in which he detailed the shooting and extensive investigation.

A North Carolina prosecutor says a Charlotte police officer acted lawfully when he shot and killed a black man in a case that touched off several nights of unrest in the city.