Facing a shortage of pilots, the Air Force is experimenting with ways to make training programs faster and less expensive.

In a makeshift classroom in Austin, Tex., 20 hand-picked airmen may represent the future of Air Force pilot training. They're spending less time in the cockpit and more time in front of screens.

They're the first participants in Pilot Training Next, an experimental program that relies heavily on virtual reality and artificial intelligence tools. The first class graduated this month.

"We haven't really changed our pilot training for at least 20 years," said Air Force Secretary Heather Wilson. "Yet technology and our understanding of how adults learn has changed quite a bit."

The Austin classroom houses two rows of flight simulators. But they're a far cry from the $2 to $3 million-dollar ones the Air Force normally uses. Each unit is made from an enhanced Windows PC, an HTC Vive headset, a gaming joystick and throttle. They cost about $10,000.

"Everything here is commercial, off-the-shelf," said Lt. Col. Paul Vicars, director of Pilot Training Next. "I could buy one of these for my son for his seventh birthday."

Built into each simulator is an artificially intelligent tutoring program which offers feedback on students' flying technique in real time, helping them hone aerobatic maneuvers and instrument approaches. The simulators are programmed to recreate the cockpit conditions of the T-6 Texan trainer aircraft, but they're being modified for other airframes.

"Students can get into the simulator without the assistance of a human instructor and they can practice particular maneuvers," said Lt. Col. Scott Van De Water, deputy director of Pilot Training Next. "They can get quite good at them, because the virtual instructor gives the right amount of feedback and gradually improves them to the point where they can perform the maneuver more or less perfectly."

"We're trying to induce good stress - the stress of focused learning," Wilson said. "But we can also tell by that when a pilot is being overloaded."

A severe pilot shortage has pushed the Air Force to re-examine its training methods. The service recently reported a 2,000 pilot shortfall, and its plan to put 1,235 students through undergraduate pilot training in fiscal year 2018 has met with obstacles. 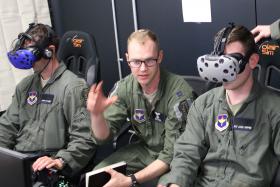 "The problem with training more pilots is that it's extremely expensive," said Air Force experimentation manager Lt. Col. Eric Frahm. "Absent a massive investment to be able to scale up our existing processes, we needed to find a better way."

Given the high cost of traditional, high-fidelity simulators, the Air Force only has roughly five or six for a base that trains 300 to 400 pilots per year. The Air Force expects the lower cost of the new simulators will allow them to be deployed far more widely. Students even can use them in their dorms to reach training milestones faster.

"If you can represent the physical cockpit in virtual reality," Frahm said, "I've really just duplicated what is probably 75 to 80 percent of the cost of those traditional simulators."

Too Much Too Fast?

With the emphasis on virtual reality simulation, Pilot Training Next students spend less time in airplanes - 60 hours versus nearly 200 hours with the old system - and get less face-time with instructors. They've also had their overall training period cut nearly in half.

That accelerated pace, coupled with the different approach to instruction, has raised some questions among Air Force leadership.

"There was concern," Frahm said. "Were we throwing out all these lessons that we had learned over 120 years of flying that were too tragically written, too often written in blood?"

But he's confident the Pilot Training Next approach is safe and that simulators can replace aircraft experience in certain contexts.

"Both in and out of the military, there are many events that we have pushed to be inside of a simulator exclusively," he said. "Because they're either too dangerous to do in the aircraft but are important to learn, or because time and experience has told us that the aircraft is just not cost-efficient."

Still, Frahm said, the Air Force is proceeding cautiously with the low-cost simulators until it has more data.

The real test will come when students graduate and move to their next level of training. There, they'll spend more time in the cockpit of the planes they'll actually fly in missions.

The Air Force has scheduled a second round of Pilot Training Next and then plans to decide whether artificial intelligence and virtual reality will play a greater role in pilot training across the force.