Me And My Muslim Friends: MENA, Whiteness & The U.S. Census

In the Season 2 debut, guests Abdullah Dorgham and Ahmed Amer bond with host Yasmin Bendaas over a shared confusion that comes when asked to fill out their race on forms.

According to current U.S. Census categories, people of Middle Eastern and North African descent, also known as MENA, are considered white. But Abdullah and Ahmed, who are of Palestinian and Egyptian descent, say that racial category misses the mark on their identity. 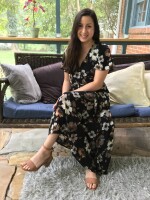 Yasmin Bendaas
Yasmin Bendaas grew up in Winston-Salem, North Carolina in an Iranian-Algerian household, which was less confusing than it could have been. She studied anthropology at Wake Forest University and science & medical journalism at UNC Chapel Hill. The most meaningful work she’s completed has been in Algeria with reporting for AlJazeera, Reuters and the Pulitzer Center. Breaking from straight news, Yasmin now works at ICON as a proposal writer for global clinical trials. She couldn’t have made this podcast without the contributions of the people listed here. You can follow her @yasminbendaas.
See stories by Yasmin Bendaas
Sponsored by Duke Health