Guns and America | By Lisa Hagen

Almost every morning in January and February, Patrick Parsons records a live Facebook video across the street from the Georgia capitol.

While it looks picturesque online, in person, it’s not the world’s most glamorous moment.

“I’ll probably go over there by the trash can, which is where I usually do it,” said Parsons, laughing. It’s easier to fit the gold dome of the capitol building into the frame from there.

“Constitutional carry simply makes the weapons license optional,” said Parsons. “So, in Georgia we have weapons licenses, a lot of states have permits,” and having either means you get to carry a concealed gun in all the places your state allows. But Parsons doesn’t like the idea that Americans need anyone’s permission to carry.

More than a dozen states have adopted some version of this kind of law, in 2019.

Parsons rattles off a number of states that have or are posed to pass constitutional carry style measures it in 2019, including South Dakota, Oklahoma and Kentucky.

“So you can imagine if you’re a Second Amendment supporter, you’re seeing this all over the internet,” said Parsons.

Part of the reason gun rights proponents in Georgia are seeing so much about constitutional carry is Parsons himself.

Thousands of people watch him on Facebook every day. Parsons encourages active participation so there’s lots of commenting and sharing. A lobbying app on his phone shows more than 6,000 messages sent to state lawmakers supporting the constitutional carry bill. It’s something Parsons encourages every day in his videos.

“Twenty years ago, we didn’t have this on any issue,” said Parsons. “No matter what you believed in, left or right. Now we have the ability to connect directly with people.”

The Georgia Gun Owners Facebook page has nearly 400,000 followers, a number that dwarfs the social media reach of the other, well-established gun rights organization in the state: Georgia Carry.

“Hasn’t social media changed the way all conversations happen?” said Mike Poss, an administrator for Georgia Carry’s Facebook page. The group has had to post a prominent and lengthy reasoning for its less than full-throated support for the constitutional carry bill. A battle rages in the spirited comments below it.

One example: “This group is a disgrace, it is a constitutional right to carry, no permit should be needed, it says it says that in the constitution, not to be infringed!!!!!!!!”

In a year when Georgia lawmakers are debating expanding medicaid and overhauling the state’s voting system, Parsons offers a bold declaration on the stalled bill he’s pushing.

“You never heard the term ‘constitutional carry.’ It was hardly, if ever, used until about a decade ago,” said Adam Weinstein, a journalist who writes about and collects guns. “It conjures up an entirely new interpretation of the Second Amendment.”

More than a hundred years ago, a Vermont Supreme Court case made the state the first to enshrine into law the ability to carry firearms without a permit. In this century, Alaska became the became the first state to pass this kind of permitless carry law in 2003.

But Weinstein says it wasn’t until 2010 in Arizona that grassroots gun rights activists there hit upon the persuasive branding strategy that is “constitutional carry.”

“The funny thing was, they weren’t even looking at the U.S. constitution,” said Weinstein. “They were pointing to the Arizona state constitution.”

The gun rights activism in Arizona and in states like Wyoming, Mississippi and Arkansas that soon followed was born of the landmark U.S. Supreme Court ruling District of Columbia v Heller in 2008. The case struck down the District of Columbia’s attempt at a handgun ban and upheld an individual’s right to bear arms.

“There was just a sense that things were up for grabs a bit after the Heller decision,” said Weinstein. “At the same time, you had the election of Barack Obama, whose presidency, fairly or not, strikes up fears in a lot of second amendment advocates of gun confiscation and registration.”

When the Arizona law passed in 2010, Weinstein said, “it was such a kind of wild, smashing success that it re-ordered the entire political landscape.” He said the National Rifle Association praised the measure, though it had played almost no role in bringing it to fruition.

“The idea is to get to a place where there’s an acceptance of firearms as an absolute right, with very few social responsibilities,” said Weinstein. He says it’s part of the reason even some staunch concealed carry advocates and lobbyists aren’t entirely comfortable with concept of constitutional carry.

He definitely doesn’t think the weapons license system in Georgia is perfect, “but I don’t think it should be just every Joe Blow that doesn’t have a record running around with a gun on their hip.”

Haley said he sees most of the local debate over constitutional carry happening on the internet, on Facebook or gun-trading forums. Online, he says it feels like people with his stance are in the minority.

The veteran Republican lawmaker had stopped by the gun shop to crack a few jokes, filling the tiny retail space with the spicy aroma of his morning cigar. Powell is no squish himself when it comes to gun rights.

“They had me on the front page of the New York Times and the [Los Angeles] Times simultaneously saying that I was probably the most dangerous man in America,” said Powell. He’s had the picture of himself from the not-quite-front page articles blown up and framed in his capitol office.

A framed photo of Rep. Alan Powell, R-Hartwell that ran in the New York Times and Los Angeles Times hangs behind his desk at his state capitol office.

That was five years ago, when he helped pass a state law that came to be known as “Guns Everywhere.” It allowed Georgia’s weapons license holders to carry guns into churches, restaurants, bars and some government buildings.

It’s just one of several expansions of Georgians’ right to carry concealed guns over the years, none of which, Powell said, Georgia Gun Owners, helped promote.

“It never was enough for them,” said Powell of the group. “They created more problems by accusing and pointing the finger. Hell, they put my picture up on Facebook telling folks, ‘Call Alan Powell! He ain’t goin’ far enough!'”

Powell said he supports the general concept behind constitutional carry, but doesn’t think it’s a winning issue across the state.

“Why in the hell do we want to bring an issue up that we know is going to be defeated? Because if you get defeated on a bill, that shows a sign of weakness of your issues,” said Powell.

“I’d much rather keep expanding the areas that law abiding citizens can carry a weapon,” he said. The best way to do that for now, Powell believes, is to keep Georgia’s licensing system intact.

Despite its success outside the state, it appears unlikely that the constitutional carry bill will move forward in Georgia this year. It’s yet to be assigned a committee hearing, and the state’s powerful house speaker has openly expressed his distaste for the advocacy group behind it: Parsons’ Georgia Gun Owners.

But that doesn’t mean the conversation isn’t having a persuasive impact on the hearts and minds of many of the state’s pro-gun population.

“My feeling is, a lot of [constitutional carry supporters] that follow that path, are going only on what they’re hearing on social media,” said Georgia Carry’s Mike Poss. “They’re not calling up and sitting down and having coffee with their representative or senator.”

It’s through cultivating those one-on-one relationships with pro-gun lawmakers that Georgia Carry has played a significant role in shaping the expansion of pro-gun laws in the state over the last decade. The strategy is in stark contrast to that of Parsons’ group, but Poss is confident it’s the best path forward for the state’s pro-gun community.

“In Arizona, which gets all kinds of high praise,” said Poss of the pioneering constitutional carry state, “gun owners can carry in fewer places than we can in Georgia.”

is a public media reporting project on the role of guns in American life. 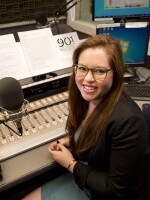 Lisa Hagen
Lisa Hagen is a reporter at WABE.
See stories by Lisa Hagen
LATEST STORIES
Pauli the Podcast
North Carolina Public Radio presents Pauli, a podcast about the power of one person to change what's possible for us all.
LISTEN
WUNC Events
Discuss North Carolina politics. Analyze how and why you love the way you do. Quiz yourself on Black history. Hear poetry from NC's poet laureate. Meet NPR hosts and reporters. You never know where WUNC's events will take you. Join us for this ride! See our upcoming events and sign up to attend.
SEE OUR EVENTS
Related Stories
More Stories