The Unsavory Roots Of The Second Amendment Sanctuary Movement

There’s been a massive wave of public resistance in Virginia to gun regulations proposed by the recently-elected and Democratic-dominated state legislature there. This winter, supporters of gun rights across the state filled local meetings and, in more than 130 jurisdictions, fought for resolutions to become “Second Amendment Sanctuaries,” which dozens have passed.

While Virginia’s Attorney General says the measures hold no legal weight, they affirm that sheriffs and county officials plan to refuse to enforce what they say are unconstitutional state or federal gun regulations.

As Virginia’s legislative session begins, much of the pro-gun energy is now set to coalesce around the gun rights advocacy group Virginia Citizens Defense League’s annual lobby day at the state capitol in Richmond. But scholars of the American far-right say the principles underlying the current sanctuary movement have a history steeped in bigotry.

Power Of The County

According to Devin Burghart, an expert on white nationalism and far-right paramilitary organizations, the language of some who support the sanctuary resolutions in Virginia bears unmistakeable links to anti-government movements from decades past.

Specifically, Burghart points to the visible influence of the idea of “posse comitatus,” Latin for “power of the county.”

Burghart says the “posse comitatus” theory claims that the political will of the people is at its most potent at the county level, and as such, the most important holders of public office are county sheriffs.

“An elected Sheriff answers only to the citizenry,” wrote Sheriff Scott Jenkins of Culpeper County, Virginia, in a recent Facebook post on the Sheriff’s Office page. “I will always respect the rule of law but I don’t need to wait for a court to interpret my duty for me.”

Sheriff Jenkins has been an outspoken supporter of the Virginia sanctuaries, vowing to deputize county residents to resist state laws regulating guns, should they pass.

“This notion of county supremacy and the ideas of the ‘posse comitatus’ that go all the way back to the 1970s, and the idea of the sheriff being the most important law enforcement officer in the land is one that has deep and deeply troubling roots in this country,” said Burghart, executive director of the Institute for Research and Education on Human Rights. “The ideas originated in the racist right.”

He says the notion was popularized by a man named William Potter Gale, “a virulent racist and anti-Semite,” as described by Burghart. Gale founded a paramilitary group named Posse Comitatus and went on to help launch the Christian Patriot movement in the 1980s, during a farm crisis in the Midwest.

“It was in the midst of this dramatic economic collapse of family farms during the ‘80s that groups like the Posse stepped in and tried to claim it was the Jews who were behind an international banking conspiracy that were putting farmers out of business,” said Burghart.

This history is documented by author Daniel Levitas in his 2002 book “The Terrorist Next Door: The Militia Movement and the Radical Right.” Posse adherent Gordon Kahl would go on to kill federal marshals before the group began to dissolve.

Since the ‘80s, Burghart says ideas about county supremacy have evolved and actively spread throughout the country, often through sheriffs in the Pacific Northwest and Southwest.

“These ideas keep getting retrenched and brought to the surface when we see efforts to try to bring about change around things like gun rights or property rights or other issues that have an impact in local communities,” said Burghart.

Mack is founder and president of the Constitutional Sheriffs and Peace Officers Association, and gained prominence in the 1990s. He was a plaintiff in a successful lawsuit resisting requirements that law enforcement perform background checks on gun buyers as originally intended by the Clinton-era Brady Bill. He says he’s in touch with some of the sheriffs supporting Second Amendment sanctuaries today.

“A lot of those sanctuary cities and counties across the country don’t go far enough,” said Mack. “What do you do if they still come in and try to take law abiding citizens’ guns? [The sheriffs] need to actually intervene and interpose and not let it happen.”

These county supremacy and constitutional sheriff principles are glaringly visible to experts like Burghart in the rhetoric and resolutions coming out of Virginia. But it’s not clear that this history is common knowledge among the average gun rights supporters who’ve peacefully raised their voices against proposed gun regulations in Virginia.

“That’s a huge problem,” said Burghart. “It’s virtually impossible when you adopt the language and the rhetoric of white supremacy to somehow rhetorically distance yourself from it. You need to not use that language in the first place, and you need to understand where it’s coming from and what it means to people in your community.”

Last week, Virginia Gov. Ralph Northam declared a state of emergency and temporary ban on weapons on the state capitol grounds where the VCDL’s rally is set to be held. Less than a day later, Maryland’s U.S. Attorney General announced that the FBI had arrested three alleged members of a “racially motivated violent extremist group” who officials say were planning to attend the Virginia rally.

Before the ban, organizers of the January 20 rally had urged attendees to safeguard the public image of gun rights supporters by not bringing rifles to the event.

“If you are asking how you can help with VCDL’s mission, carrying long guns at Lobby Day is not helpful — it is a distraction. VCDL’s important messages inevitably get lost as the press rushes to get pictures of anyone carrying an AR or AK,” wrote VCDL President Philip Van Cleave.

However, Van Cleave has also welcomed militia to attend the event in Richmond. Members of militia groups including the Oath Keepers and III% Security Force are expected to attend. 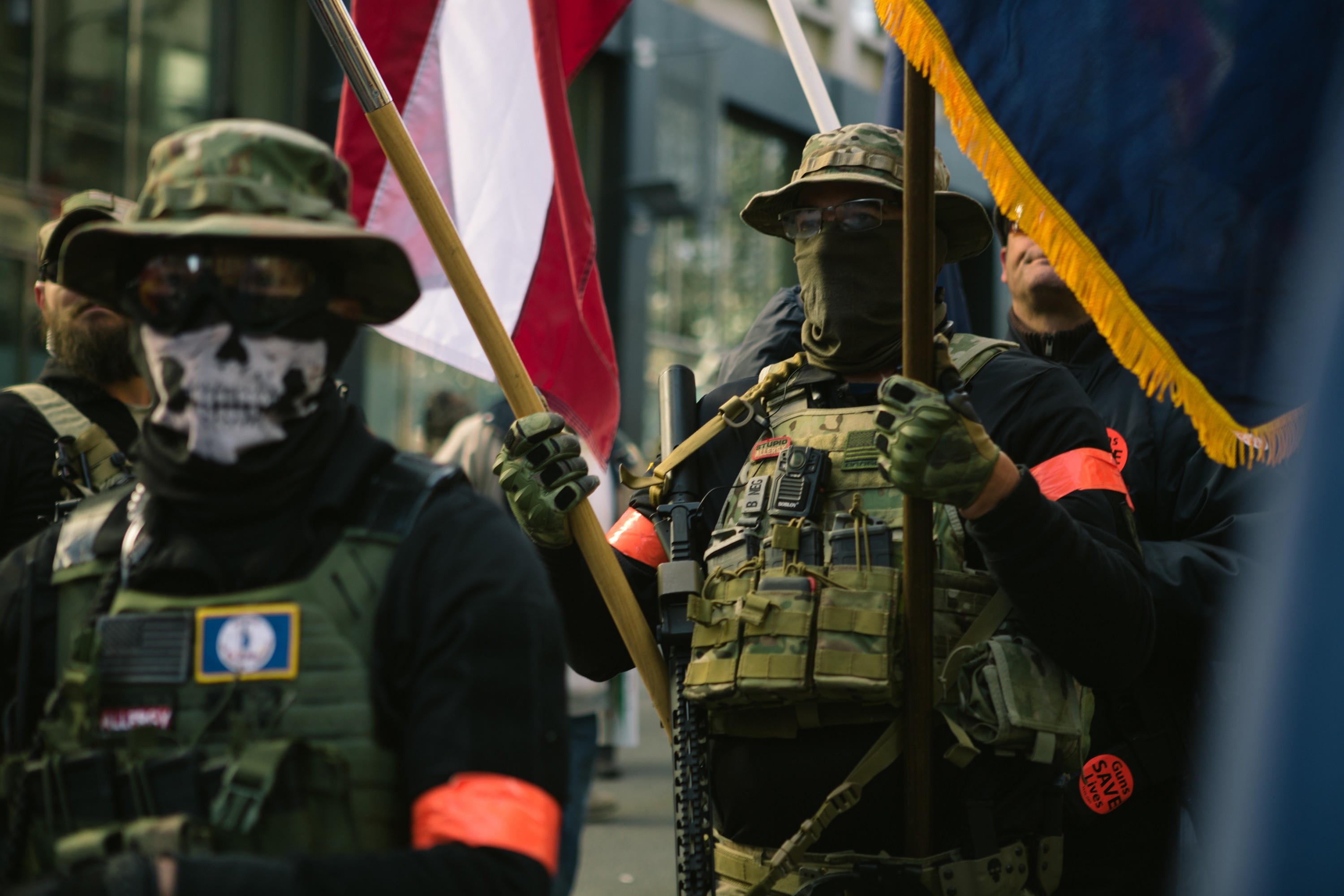 By the time of the rally, outrage had begun brewing among attendees reacting to a NBC reporter’s now-deleted tweet characterizing the event as a “white nationalist rally.” When the event ended with just one arrest of a woman for violating a mask law (though scores of others had worn masks without being arrested Monday), the mood among gun rights supports was triumphant.

Antonia Okafor, a newly minted spokesperson for Gun Owners of America, was one of two black speakers who addressed the estimated 22,000 person crowd in Richmond. She sarcastically told Fox News the next day that “This was by far, hands down, the worst white supremacist rally I have ever seen.”

In her speech, she referred to Virginia Gov. Ralph Northam as “Governor Blackface,” and echoed the sentiments and posters of many in the crowd that concerns about white nationalism rang hollow from a man accused of posing in black face in medical school.

In the crowd, which was overwhelmingly white and male, conservative media outlets found many non-white rally goers who pushed back forcefully against the NBC reporter’s characterization.

Alleged white supremacists had in fact been arrested in Maryland the week before they had the opportunity to carry out violent plans in Richmond, according to an arrest affidavit. In addition to the presence of militia groups whose members have been convicted for violent and other criminal acts, a prominent Holocaust denier was also spotted in the crowd.

Asked why such groups might be attracted to the Richmond event and its message, VCDL President Philip Van Cleave was dismissive.

“I mean, they’re not affiliated with us,” said Van Cleave. “They’re they’re basically piggy backing and they’re here to showboat in front of the press.” 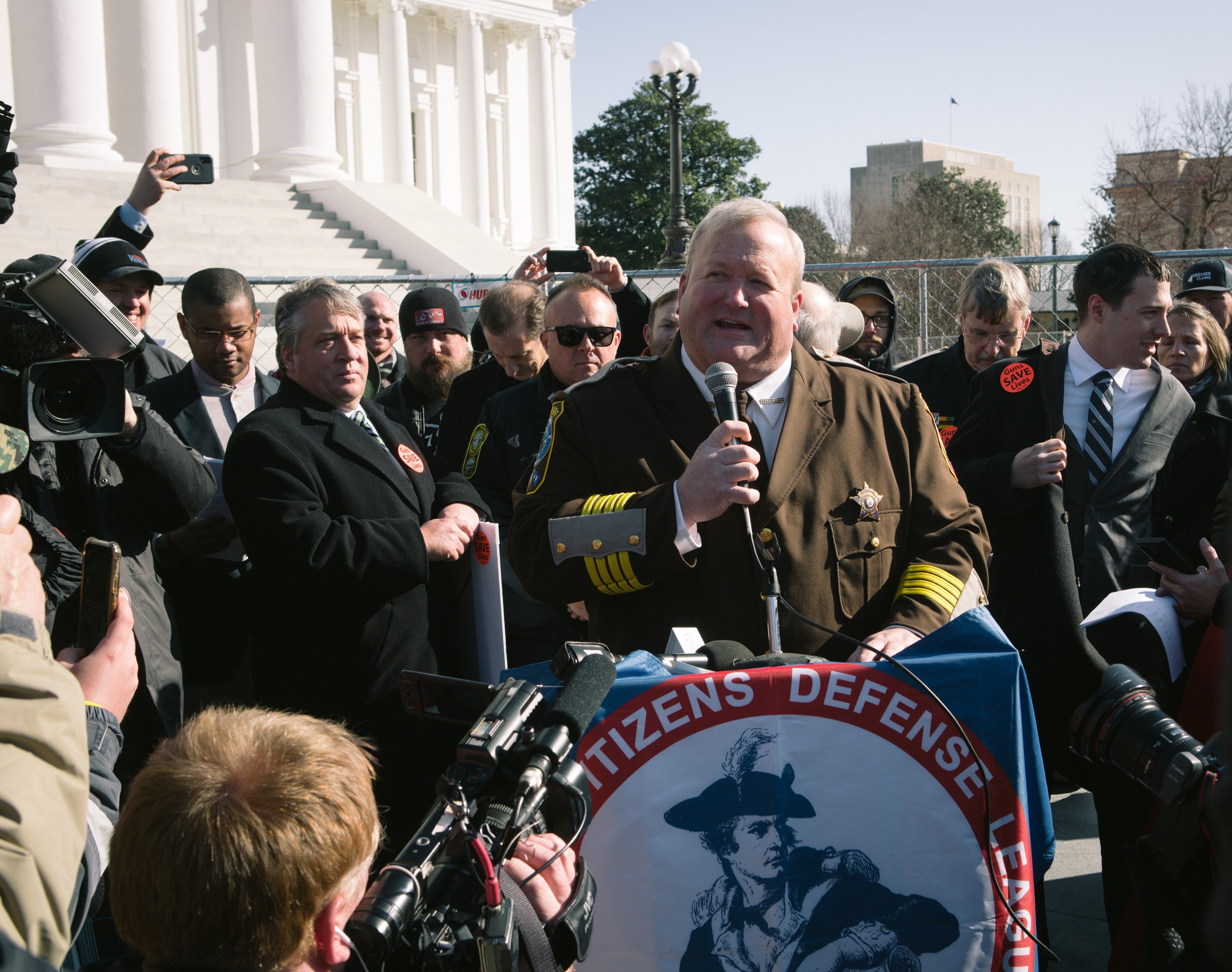 Culpeper County, Virginia, Sheriff Scott Jenkins, who spoke at the Richmond rally, rejects the notion that his views on the authority of sheriffs have anything to do with anti-government or racist views.

Days after the rally, Guns & America caught up with Culpeper County, Virginia, Sheriff Scott Jenkins, a featured speaker at the rally because of his widely-reported response to proposed gun legislation that he would deputize “thousands” of residents in order to circumvent future laws that might ban certain firearms or ammunition.

“It’s our God-given right to own weapons, tools to defend our lives and possess those and do so,” said Jenkins.

He identifies as a “constitutional sheriff” and says he requires all his staff to read both of Sheriff Richard Mack’s books.

“Not a lot to read, but it gives a good overview of the county sheriff and the role of a deputy sheriff,” said Jenkins, “from how they should maybe look at things a little bit different than the average police officer or law enforcement officer in the country because we’re very unique. Sheriffs answer only to the citizenry that elected them.”

He said he was aware of the history of the Posse Comitatus group and of William Potter Gale. Jenkins at no point embraced violent resistance against the government, or racism.

“As far as the prejudice and the root of what you’re speaking of, that doesn’t even merit a response. It doesn’t in any way relate to me or my thoughts and views on things,” said Jenkins, who added, it was “really reaching” to compare Gale’s ideas of county supremacy to his own.

Jenkins said that if people don’t like the authority of American sheriffs, which for him includes interpreting and enforcing the state and federal constitution as he sees fit, they should change the state laws that grant him his powers. But he doesn’t see that happening any time soon.