What if a dam holding back coal ash burst at one of Duke Energy's coal plants in the Carolinas or Midwest? Newly released maps from Duke show many properties would be inundated, including some homes and docks. The maps are now public, after environmentalists threatened to sue.

Charlie McRorie steers his boat away from the dock into Brown's Cove on Lake Wylie. It's across from Duke Energy's Allen plant at the edge of Gaston County, where two basins store 16 million of tons of coal ash - a byproduct from burning coal.

"Now turn around and look and see what I'm talking about. This is the choke point. And in order for the ash to get back to the back of the cove, I think this would fill up," he says.

Duke's map shows that after a dam break in a heavy storm - the worst-case scenario - a flood of coal ash would arrive in the cove in about five minutes. Within a half-hour, ash-laden water would cover his lower yard - and shut off the cove.

His dock and waterfront would be hit, but his house is high enough up the sloping lot to avoid damage. He's matter-of-fact about the threat - no thoughts of moving any time soon.

But across the street, on the lake side of this peninsula, an older waterfront house would be swamped.

"It would either be covered in ash, or it'd be knocked off its foundation, maybe in the river. I don't know. That's concrete right in the front there, but I don't know what's securing the house - it's just a little one bedroom house - to the ground," McRorie says.

In the worst case scenario, 65 homes and buildings and hundreds of yards and docks around the Allen plant could be flooded by ash. Most of the boathouses and homes at the Gaston County Wildlife Club off South Point Road in Belmont would be at least partially under water and ash.

"These sites are hundreds of acres stacked 75 to as much as 130 feet high. When you have as much ash over as much acreage, stacked as high as it is, it can spread out and cause a lot of disaster for what's around here, unlike Kingston, Tennessee, is a very developed, very populated area," says Perkins.

Until last month, residents around Allen and other Duke Energy plants couldn't find out if a coal ash dam break would affect their streets or houses, even though that's been required by federal law since April. Duke released some information, but kept maps secret from all but local emergency responders - and they had to sign nondisclosure agreements to get them.

Frank Holleman of the Southern Environmental Law Center threatened to sue on behalf of the Catawba Riverkeeper and other groups to force Duke to release the maps.

"Duke Energy clearly didn't want the communities in North Carolina and in the rest of the country where they operate coal-fired plants, to know the consequences that could flow from a failure of one of their unlined, primitive coal-storage sites. 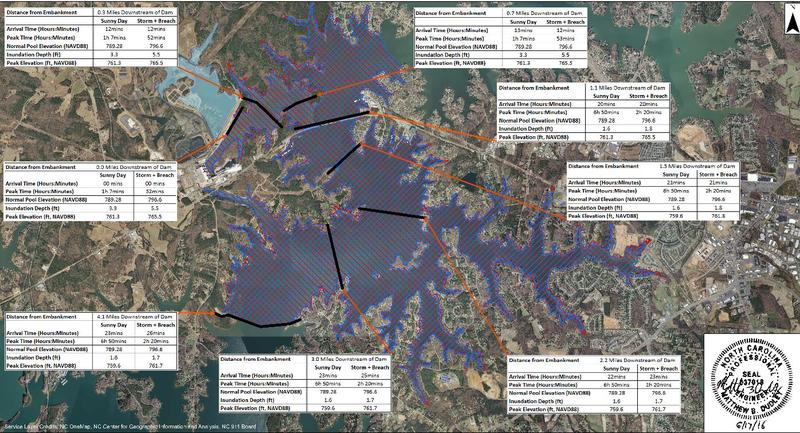 "First responders could access it quickly when they needed it but also to protect the privacy of infrastructure like this," Culbert explains. "Once we recognized the fact that the rules had changed and that we needed to make an adjustment we rescinded those agreements and now folks can have easy access to that information on our website."

As with Lake Wylie, a serious spill near Duke's Marshall plant on Lake Norman would inundate dozens of homes and structures and could cut off access to neighborhoods on small peninsulas.

"These maps do illustrate the most extreme scenario, not the most likely scenario," Culbert says.

There are actually two sets of maps.  One shows the effects of a full dam breach during sunny weather, with normal lake levels. Another envisions a full breach during an unusually heavy storm, with a couple feet of flooding.

Culbert says environmentalists are using the maps to alarm people.

"A lot of the environmental organizations who are drawing attention to these maps are doing so to scare community members into advocating for their most extreme solution," Culbert says.

That solution calls for excavating and moving coal ash at all Duke's plants to modern, lined landfills. That's the crux of a long-running fight between Duke and environmentalists.

Duke is excavating ash at some plants where required by court order or state law. But at many others, like the Allen and Marshall plants, it wants to leave ash in place under new waterproof covers. The company says excavating those sites would take too long, cost too much, and isn't necessary.

Meanwhile, Culbert says the risk of dams breaking is declining, and eventually will be moot. Duke has completed dam repairs at many sites. And state and federal laws require all existing coal ash ponds to be shut down, by 2029 or sooner.