#NPRreads: Gambling In The Bible Belt

#NPRreads is a feature we're testing out on Twitter and on The Two-Way. The premise is simple: Correspondents, editors and producers throughout our newsroom will share pieces that have kept them reading. They'll share tidbits on Twitter using the #NPRreads hashtag, and on occasion we'll share a longer take here on the blog.

This week, we bring you five reads.

The politics of gambling in the Bible Belt -- great piece by @Josh Moon http://t.co/TistANlwKJ via @mgmadvertiser #NPRreads

Deep in the Bible Belt, gambling is a fraught political issue. Is it sinful exploitation of the poor, or an industry that can pull desolate communities out of poverty?

The Montgomery Advertiser's Josh Moon digs into the history of legalized gambling in Alabama and the intricate political and legal battles that have ensued as gaming expanded in the state. The industry has grown from smoke-filled trailers and bingo halls to glitzy casinos rising up amid the cow pastures on tribal land. There's even some international intrigue. Here's the quote that hooked me:

"Bob Riley, the former governor of Alabama, a former Congressman and still a cattle farmer in Clay County, bent closer to the phone and said in a polite, nonchalant tone, 'You have a second to come up here and talk about the Russian mafia?' "

Moon's story is an informative backdrop now that the state is again considering new forms of gambling as a way to plug a fat budget hole — a story I'll be reporting on in the coming weeks for NPR.

Worth a read. #NPRReads Could America use 'a good SOB' like John Kasich in the Oval Office? http://t.co/1sS3vb8j4D

There's a line a few pages into Molly Ball's story in The Atlantic about Ohio's governor, a potential presidential candidate, that jumped out at me: "The thing about John Kasich is, he's kind of a jerk." She explains the assertion, of course, but as you read on, you also get the sense he's not a jerk — or at least, it's not so black and white:

"But while Kasich can be rude — and at times even genuinely nasty — he is also prone to spontaneous displays of empathy, frequently becoming emotional as he talks about the plight of people 'in the shadows.' To his allies, these traits are two sides of the same coin. They describe Kasich as a sort of heartland Chris Christie — brash, decisive, authentic — without all the baggage. 'He does have a tendency to ready-fire-aim,' says Mike Harley, who helped run Kasich's 2010 campaign for governor and worked in his administration. 'But here's the thing — he makes things happen. His will is tremendous, and he gets people to follow him. He's an ass-kicker.' "

As you'd expect, Kasich's political opponents describe him differently — Ball talks to them, too, and also paints some great, colorful scenes of Kasich in action. It's a nuanced portrait and a reminder that politicians are actually three-dimensional, complicated and human, like the rest of us.

From National Correspondent Tovia Smith, who is covering the trial of Boston bomber Dzhokhar Tsarnaev:

why his old elem sch teacher still loves the boy who grew up to be boston bomber. #Tsarnaev #nprreads #bostonbombing https://t.co/OFKg9gOYvx

It happened more than once, but it continued to literally stun me.

After months of testimony about horrific pain and suffering, and mounting rage against the man who prosecutors say was hellbent on becoming "America's worst nightmare," an old friend or teacher would take the stand and smile so warmly at Tsarnaev that his or her eyes twinkled.

You couldn't help but wonder, "Do they not get what he did?"

Witnesses described him as "beloved," "kind," "sensitive" and "compassionate" and fawned over pictures of him at about the same age as the boy he killed with his homemade bomb.

OK, maybe he was a sweet kid back in the day. But knowing what we know now, how can anyone still, now, muster up that loving gaze?

"We humans are surprisingly good at holding two irreconcilable ideas in our psyches at the same time."

After reading it, I'm not sure I can wrap my brain around it any better, but Norris seems to have come to terms with that inner dissonance.

The U.S. Jewish community is dwindling — no more so than in rural America. Two-thirds of respondents to a 2013 Pew survey said they don't belong to a synagogue and about a third of Jewish millennials don't identify themselves as Jews by religion. So at first, Jordan Teicher's story in The Morning News of a 9-year-old girl named Zaidee and her small Jewish congregation in Rapid City, S.D., seems to offer a grim outlook for the future of Judaism in the remote areas of our country. Teicher writes:

"Zaidee may in all likelihood grow up to be a proud, Jewish-identifying woman living in Rapid City. But if new congregants don't arrive, the existence of Synagogue of the Hills will be in jeopardy.

"You wouldn't know it if you went to some of the mega-synagogues on the coasts, but across the [country] in small cities and rural areas, small Jewish congregations like Synagogue of the Hills are in decline."

But Teicher also sees signs of hope for the isolated congregation. A student rabbi from Cincinnati who visits once a month has decided to keep coming back for another year, and the synagogue president is hopeful that Zaidee's generation will carry the congregation forward.

From Frederica Boswell, a producer with NPR's Identity and Culture Unit:

A refugee's journey from Somalia to Sweden "Is it part of human life...there is no time you'll be happy?" #NPRreads http://t.co/PkaxPfYUjG

As thousands recently drowned in the Mediterranean, The Sun tabloid published a column about how to deal with migrants that opens with the words, "I don't care. Show me pictures of coffins, show me bodies floating in water, play violins and show me skinny people looking sad."

Whatever your views on immigration, Ben Rawlence's profile in The Guardian of Amin Amey, a Somali refugee in Sweden, makes you care. It tells a love story. It tells the story of a little boy's grief at his dead brother. It tells a story of loneliness, isolation and impenetrable bureaucracy. It even tells you what it's like to experience snow for the first time after your feet are used to Kenya's dusty Dadaab refugee camp: "You complain of burning."

Every person who decides to uproot his life in search of a better one has a story to tell, and for many it's not an easy transition. As Amey says, "When I was in Dadaab, I was thinking how can I get out of here, to a better place. I don't know why I still have that problem, of wanting somewhere else. Is it part of human life — that there is no time you will be happy?" Here's an excerpt:

"But now, in the room looking out over the still-frozen lake, Amin struggled to accept what was happening to his family: 'Being a Somali is like you are guilty of something. My family cannot come here because they are Somali. I cannot become a Swedish citizen for eight years because I am a Somali. I cannot get a visa to go to Kenya because I am Somali. The problem lies in where I come from ... Up to now I have been honest, I have abided by the law. But I can resort to anything, any extreme thing, to be with my child. That is why people break laws, because they are seeking justice.'

"Amin could hang on, indefinitely, in Sweden, or he could try to smuggle his wife and child into Europe illegally, or get himself back to Kenya via a neighboring country and live illegally, as thousands did. But stepping outside the framework of citizenship and into the world of illegal immigration was risky. He was proud of the fact that he had grown up in a law-abiding family and under the protection of international refugee law in the camp: It was the only structure he had."

Debbie Elliott
NPR National Correspondent Debbie Elliott can be heard telling stories from her native South. She covers the latest news and politics, and is attuned to the region's rich culture and history.
See stories by Debbie Elliott
Frederica Boswell 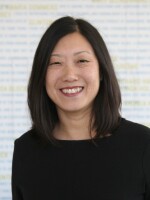 Shirley Henry
Shirley Henry is the Chief Washington Editor for NPR News. In this role, she oversees all aspects of the Washington Desk. Its correspondents, editors and producers cover the White House, Congress, the Supreme Court, the Justice Department, presidential campaigns and other electoral politics, and tell stories across all of NPR's broadcast and digital platforms. She also oversees and edits the NPR Politics Podcast.
See stories by Shirley Henry

Tovia Smith
Tovia Smith is an award-winning NPR National Correspondent based in Boston, who's spent more than three decades covering news around New England and beyond.
See stories by Tovia Smith
Avie Schneider
See stories by Avie Schneider
LATEST STORIES
Pauli the Podcast
North Carolina Public Radio presents Pauli, a podcast about the power of one person to change what's possible for us all.
LISTEN
WUNC Events
Discuss North Carolina politics. Analyze how and why you love the way you do. Quiz yourself on Black history. Hear poetry from NC's poet laureate. Meet NPR hosts and reporters. You never know where WUNC's events will take you. Join us for this ride! See our upcoming events and sign up to attend.
SEE OUR EVENTS
More Stories