When Sergeant Timothy Conrad was stationed at Fort Hood, Texas ten years ago, he needed new furniture. So he headed off base to buy new stuff. Freedom Stores, he recalled, was "right outside the gate."

Freedom Stores, Inc. closed in 2015. Before that, the company had big box stores outside military bases all over the country. Conrad bought his furniture on credit. He signed a contract and agreed to make regular payments on the loan. He was young then: 28 years old.

Conrad made regular payments for nice years - thousands of dollars worth. But he didn't get any closer to paying off the loan. Eventually, he realized it was a scam and learned that Freedom Stores was targeting soldiers just like him.

"I felt ... I don't want to say betrayed," Conrad explained. "I guess embarrassed."

"They get the service members to sign onto a financing contract, which is the real product, she said."

Nelson's office is in Watertown, New York, near Fort Drum, where Conrad is now based. The office has handled lots of predatory lending cases, most of which she says are characterized by open ended credit arrangements with high interest rates. 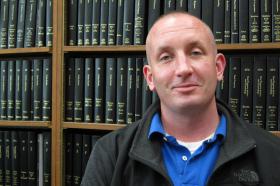 Those interest rates can reach as high as 200 percent. Nelson says companies disguise the interest rate by marking up an item's purchase price. They encourage service members to use automatic payment. In some cases, they take money straight out of soldiers' paychecks and hound soldiers until they pay up, even contacting their commanding officers.

"A salesperson can tell just by looking at their uniform what their pay scale is and what sort of money they do have available."

The scams are common.  Since 2011, more than 31,000 service members registered debt-related complaints with the Consumer Financial Protection Bureau.

There are some laws that protect soldiers. The Military Lending Act regulates most types of personal loans to active duty service members. And the Army tries to teach its members to make good financial choices.

Fort Drum financial readiness counselor Megan Corbett Hanson says all soldiers ranked sergeant and below are required to take classes when they arrive on base, where they, "create a budget, learn about credit, how it works, how much those credit contracts actually cost, figure out how to read them and understand them."

Timothy Conrad took that class when he got to Fort Drum a couple years ago. Last summer, as he thought about buying a house, he realized he couldn't figure out where those furniture payments he'd been making for nine years were actually going. So he met with an Army financial counselor.

"We did a little research; there were some discrepancies," Conrad recalled. "So we contacted Ms. Nelson here at the Attorney General's office."

It turns out that Freedom Stores had already been sued and had settled with the federal government and the states of Virginia, North Carolina, and Colorado. But it was still collecting payments on service member contracts - 257 of them in New York.

This spring, Nelson and her team settled with Freedom Stores, wiping out those New York-based service members' debt. But she says there are more predatory companies out there. And soldiers - and civilians - should stay vigilant.

"I think It's important for all of us to keep an eye out and make sure these businesses are playing by the rules and treating our military with the respect they deserve," Nelson said.

And Timothy Conrad has advice for fellow soldiers: Be cautious. Read everything. And don't be afraid to ask for help.

"Before you sign any kind of contract with anybody - whether it's a car, a home - you need to get with a financial advisor, either personal or through the military, and they will steer you in the right direction," Conrad said. "I'm living proof."

A growing number of homeless veterans are women. But there are few places that specialize in helping them get back on their feet.

A west coast group is using youth theater to tell the stories of an often forgotten group of children -- kids who grow up in military families.

New research shows getting so-called "unbanked" people into the formal banking system can be good for the community. Alejandro Sanchez works for the Latino Credit Union in Durham. He says the study from the University of Virginia listed several advantages to bringing banking to previously unserved areas.