Women Leaders No Longer A Rarity In Today's Navy

While the Army and Marines are just now opening all combat jobs to female troops, women have been serving on -- and commanding -- Navy warships for years.

Listen
Listening...
/
John Ismay reports on the integration of women into the Navy.

When the Navy guided missile destroyer USS Decatur left San Diego last month for a seven month deployment, it featured something that would be unusual in the Army or Marines: three women leading a combat unit.

Commander Mary Katey Hays is the ship's Executive Officer or "XO" -- the second in command. Reporting to her that morning were Lieutenant Laura Baumgartner and Lieutenant Anna Douglas. Baumgartner is the Officer of the Deck, and like Lieutenant Douglas, is a qualified Surface Warfare Officer.

While the Army and Marine Corps are only now opening their largest contingent of combat jobs to women, the Navy has allowed women to serve on warships for about twenty years. And it's becoming more common for female officers to command the heavily-armed vessels.

"There's an increased number of women joining the Navy," Hays said, noting that about twenty percent of her ship's crew is female.

"People have mentored me and given me direction and helped me, and it didn’t really seem to matter if I was a guy or a girl," Hays said. "They wanted me to learn, and I wanted to learn."

Women in the Navy also are commanding aircraft carrier strike groups as one- and two-star admirals. And for the first time, a female officer, Vice Adm. Nora Tyson, has taken command of one of the Navy's six "numbered" surface fleets. Tyson's in charge of the Third Fleet, which operates in the Pacific.

"Right place at the right time"

Those modern day female leaders are following in the footsteps of people like retired Navy Captain Bobbie Scholley. 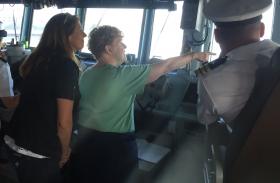 When Scholley joined in 1981, women weren't allowed to serve on warships. They also couldn't fly fighters or attack jets, and they couldn't serve on submarines or SEAL Teams. So Scholley was assigned to an "auxiliary" -- or "support" -- ship called a "submarine tender" in Charleston, S.C.

To make repairs on subs below the waterline, the ship had its own contingent of deep-sea divers. When the officer in charge of the dive team retired, there was no replacement aboard, so Scholley raised her hand and volunteered.

"I was in the right place at the right time," Scholley remembers. "I was able to convince the Executive Officer onboard that he needed to send me to Dive School."

It was a bold move for both Scholley and her chain of command. At the time she began training, only a handful of women had ever graduated.

Scholley graduated and earned the coveted Navy Diving Officer insignia, going on to a distinguished career as a Navy Special Operations officer. Among her accomplishments: she led a unit that helped salvage the Civil War ironclad USS Monitor off the North Carolina coast in 2002.

In order to become a diver, Scholley had to pass a physical fitness test that is all but identical to the one SEAL candidates need to pass. But solely because of her gender, being a "frogman" wasn't an option.

All that has changed.

"It’s just incredible the differences that women were allowed to do from the time I came in the Navy in 1981 until I retired in 2005," Scholley said.

Scholley now is following the controversy over recent Pentagon decisions that for the first time allow women into the Army and Marine Corps infantry.

When she hears skeptics question whether gender-integrated units can perform as well in combat as all-male units, Scholley shakes her head.

"I just have to chuckle that these arguments didn’t hold any water back then, and I’m pretty sure they’re not going to hold any argument today," she said.

Loaded with Tomahawks, headed out to sea 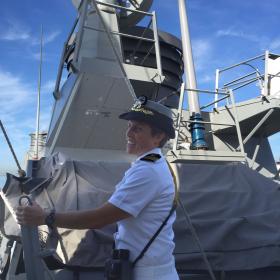 That April morning, families of the crew packed the pier to wave goodbye. Civilian workers in hardhats disconnected power lines and used cranes to pull the walkway that connected Decatur to the pier. Inside the ship, the crew was busy lighting off gas-turbine engines, manning radar scopes, and getting ready to cast off the lines keeping the ship moored.

In the pilothouse, Commander Hays quietly ensured the ship was ready to leave on-time. Together, Baumgartner and Douglas drove the ship through the channel and safely out to sea.

Once the ship cleared the last buoy, Decatur headed for its first port call: Pearl Harbor in Oahu. Afterwards, it will keep steaming west to patrol the Pacific and carry out exercises with allied navies. The ship is loaded with Tomahawk cruise missiles and other weapons, ready for a fight if called upon.

One person who’s seen Decatur change through the years is Joan Shalikashvili, whose late husband John was Chairman of the Joint Chiefs of Staff in the mid 1990s.

She’s the ship’s sponsor -- meaning she’s the one who broke the bottle of champagne over the bow when Decatur was christened, and she's followed the ship closely ever since.

"I don’t even think twice about it," Shalikashvili says of having a women in charge.

Hays didn’t think twice about it either. Once the Decatur returns home, Hays is scheduled to move up from her position as second-in-command and become the ship's commanding officer.

She said she didn’t start out wanting to command a destroyer, but from her very first tour she found herself looking one step ahead.

"The first thought I had wasn't, 'Oh, I want to be the captain of a ship,'" Hays said. Instead, "it was looking at the job that my bosses did and asking myself, ‘Do you think you’re capable of that job? Do you think you’d like to do that job?'"

Beginning this month, tattoo enthusiasts who serve in the U.S. Navy can ink a lot more of their bodies. The new policy is designed to help recruit millennials, who sometimes have been turned away from military service because they have too much body art.

Service members with Other-Than-Honorable discharges receive no veterans benefits and are much more likely to become homeless. But the military has no consistent standards about who gets a dreaded "OTH."

Four Years After Repeal of 'Don't Ask, Don't Tell,' Much Is Left Undone

More than four years after the military’s discriminatory policies against gay and lesbian service members ended, veterans advocates say the Pentagon has not done enough to help the roughly 80,000 troops kicked out of the services for being gay since World War II.