The Marine Corps photo scandal has disappointed some veterans who helped break down barriers for women in the military, but they say it shouldn't overshadow the progress of female service members.

The military is considering criminal charges against Marines and veterans who shared inappropriate photos of their female colleagues.

But the scandal -- which may involve hundreds of current and former service members -- hasn’t demoralized some women veterans, who say it shouldn't overshadow recent gains women have made in the military.

The United States Military Academy at West Point didn’t even accept women in their ranks until 1976. Carol Barkalow was in that first class. She graduated in 1980 and served 22 years in the Army.

Barkalow remembers how female cadets were hazed and harassed back then. But she said women have made progress since, even in light of the scandal, in which members of an online group allegedly shared or commented on images of nude or semi-clad female Marines.

"There is some good news with this, even though what they did was horrible," Barkalow said. "Now, we have the social media and the interest to try at last to get the military to understand that we are a vital part of this force. We are never going away and some very basic things have to change within our military." 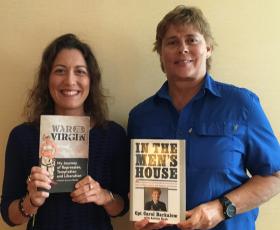 West Point has come a long way over the last 40 years, she said. It now has a female dean of students and female commandant.

"We have to have women -- general officers, admirals -- in every rank in each of the services. So much so that when you walk in a room, it's not just one woman, it's not just two women, it's a number of women sitting at the table," Barkalow said.

Barkalow, who lives in Pinellas County, Fla., is friends with 2001 West Point graduate Laura Westley, who grew up nearby in New Port Richey.

Even though they're from different generations, they have a lot in common. Both have written books about their military experience. Barkalow co-authored In the Men’s House: An Inside Account of Life in the Army by One of West Point's First Female Graduates. Westley, a veteran of the Iraq war, wrote War Virgin: My Journey of Repression, Temptation and Liberation.

Westley said the photo scandal might be related to the fact that the Marine Corps is the only service branch that still trains women and men separately.

"The way they separated the women in their training is showing really weak leadership," Westley said. "We're not saying lower the standards, but be encouraging, be supportive and train other Marines on how to be accepting and what gender integration is all about."

Westley's memoir recounts her experiences of being sexually harassed and assaulted while serving in Iraq.

She views the most recent scandal as a step backward, especially after three women made it through the Army’s grueling combat training Ranger School last year.

"(Maj.) Lisa Jaster, she was 37 and the mother of two children when she graduated from Ranger School," Westley recounted. "They really looked to her as a leader while they were in Ranger School because of her brains."

Westley and Barkalow were among the dozens of West Point women who attended the graduation of the first women from the Army Ranger School.

As one of the first women to graduate West Point, Barkalow said problems like the photo scandal come down to the same thing for both women and men in the military: respect.

"It's about respecting yourself and respecting your battle buddies, and somebody taking advantage of you sexually is about power and disrespect," Barkalow said. "So, it is about time we started educating."