Troops Are Marrying Each Other More Often, Creating New Challenges for the Pentagon

About 84,000 service members are married to another member of the military, and some find it hard to balance their marriages with their careers.

Listen
Listening...
/
Steve Walsh reports on how the military is reacting to the increase in dual-military married couples.

In their 17 years of marriage, Angelina and Ruebin Gabriel have become accustomed to being apart.

The Gabriels are both Navy Chief Petty Officers. They balance their family life - raising three boys - with their military careers. They've each been deployed separately, and once were both deployed at the same time.

On a recent late afternoon, Angelina -- still in her Navy fatigues - was multi-tasking in the kitchen of their San Diego home, while Ruebin was still on duty.

"A lot of times one of us is not here, and that's what's stressful," said Angelina, as she prepared a spaghetti dinner for the kids, checked on the laundry, and responded to a barking family dog. "I'm more lenient because I want to coddle the boys and make sure they're okay, because they're feeling the fact that their dad's not here." 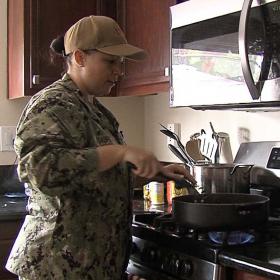 Even when neither parent is deployed, the Gabriels' home life can be erratic. They try to communicate with each other, divide up parenting responsibilities, and make sure their command is aware of their family needs. But they still have to work around the obligations of military service.

"My husband, he's doing exercises and stuff now," Angelina said. "So his schedule is anywhere between 4:00 in the morning to 8:00 at night."

The Gabriels' situation is becoming increasingly common in the modern military. As more women have enlisted in the armed services, the number of dual-military married couples has grown. About 84,000 service members are married to another member of the military. It is a group roughly the size of everyone on the payroll of the U.S. Coast Guard.

It is also a group large enough that the military is beginning to focus more on their challenges. A 2017 report from a Pentagon advisory committee called on the Department of Defense to do more to accommodate the family needs of dual-military couples.

The report from the Defense Advisory Committee on Women in the Services noted that dual-military couples are subject to "unique stressors in navigating their work and family roles because they must contend with family separations resulting from deployments, temporary duty, and Permanent Change of Station."

Of greatest concern to the committee: Pentagon research shows when a married couple can't live together for long periods of time, they start talking about whether it's time for one of them to get out.

"When that decision is being made, we have more service women leaving the military. They are leaving at higher rates than their male spouses," said Janet Wolfenbarger, a retired four-star Air Force general who chairs the committee and is herself part of a dual-military couple.

"It really is about national security, to be able to attract and retain high caliber individuals in this country who want to serve," Wolfenbarger said.

Marine Major Christina Upton is one of those female service members who's deciding whether to continue her military career. She and her husband, Chris, who's also a Marine Corps major, are expecting their first child. She worries that after the baby is born, she won't be able to give either her family or her career her full attention. 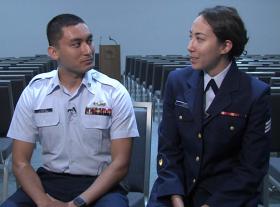 "There is a reason why I only got married two years ago," Upton said. "I've been a very good Marine for 20 years, and I really don't know how to do something at half speed."

She's leaning toward retiring, but her husband notes that he knows other military couples who raise children.

"They do it well and they do it successfully and I know we could do it as well," he said. "So if she wants to stay in I could definitely support her."

Even some couples just starting their military careers are aware of the choices that may confront them in the not-too-distant future. Pentagon data show "up and coming Millennials" are less willing to sacrifice their own family life to serve.

Coast Guard Petty Officer 2nd Class Cody Litman and Seaman Loren Mano have known each other since high school and said they've both embraced life in the Coast Guard and believe in the mission. Still, they say their family comes first.

"That's definitely something we've discussed for sure," Litman said. "If we have kids and one of us is going to get stationed completely across the country, we would probably call it quits."

Each couple said their commanders try to keep them together. In 2016, the Navy updated its guidelines to put a higher priority on stationing married couples within "90 driving miles" of each other. Under the new rules, sailors are co-located with their spouses by default, unless the needs of Navy make that unworkable.

Other service branches have enacted similar guidelines, but the Defense Advisory Committee on Women in the Services recommends that the Department of Defense set a universal policy, especially for the growing number of people married to someone in another branch of the military. As family life grows more complicated, the committee also asking the Pentagon to keep unmarried or divorced parents together if the couple wants to stay together to raise their children.

Despite the challenges, many couples are satisfied with both their military careers and their dual-military marriages. A handful of studies have found no greater rate of marital discord among dual-military couples.

Jennifer Gabbard, who's retiring as a Navy nurse and Chief Petty Officer, said being married to someone else in the Navy made deployments easier, because she and her husband share the same world view and both understand the adventure and excitement of traveling to other parts of the world.

"You don't have to explain things," Gabbard said. "People think it's harder but it really isn't. You understand each other."

VA Issues Long Awaited Veteran ID Card, But It Comes With An Ad On The Back

Congress mandated the card in 2015, but provided no funding. So the VA struck a deal with Office Depot.

As the Senate considers Robert Wilkie's nomination for VA secretary, veterans groups worry that the agency's leadership gap has slowed its work.

Remembering A Near Disaster: U.S. Accidentally Drops Nuclear Bombs On Itself And Its Allies