Seated on a garden bench next to a gurgling fountain in the warm Southern California sunshine, Greg Serpa leads a mindfulness meditation, encouraging his audience to focus solely on breathing.

"Taking in kindness and compassion, letting it be just for you," he says, "and as you breath out, sending it out to everyone else."

He strikes a bell, the type used in some yoga classes and Buddhist practices. For several seconds, the ringing competes with birds singing in the spring-like January air, marking the end of the exercise.

Despite appearances, this is not a wellness retreat or expensive day spa.

Serpa is a clinical psychologist with the West Los Angeles VA, part of the Veterans Health Administration's network of medical centers serving around nine million veterans nationwide every year.

This is a Whole Health flagship site, one of 18 in the VA system on the front lines of what the agency calls a healthcare transformation.

When President Trump signed an executive order last month committing the VA to offering mental health care to veterans in their first year of separation from the military, the order touted the expansion of some Whole Health programs to every facility in the country.

The VA describes Whole Health as providing a personalized health plan for veterans, encouraging them to practice "self-care," and providing a comprehensive care that "considers the physical, mental, emotional, spiritual, and environmental elements that work together to provide the best quality of life."

"We have acupuncture, tai chi, yoga, and a lot of other modalities that promote wholeness and healing, all in this building," Serpa said. He teaches mindfulness full time at the VA and helps train other practitioners. 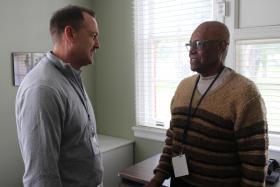 Committing to learning the practice takes discipline. The Mindfulness-Based Stress Reduction program is an eight week curriculum, including 30-45 minutes a night of meditation and one daylong silent meditation retreat geared to veterans.

He also runs the only Mindful Self-Compassion program in the VA system, a practice where veterans are encouraged to nurture a sense of kindness toward themselves.

"What we're talking about is how to get through this life just as it is. How to hold yourself with kindness in a world where they have gone and done the things that they've done, and have the health concerns that they have," Serpa said.

Mindful Self-Compassion provides tools for confronting the hyper-critical, inner "drill instructor voice" that some veterans struggle with, constantly telling them to suck it up, stop complaining, and try harder.

"All of this negative self-talk really does have an impact in our immune function and our mood," Serpa said.

Serpa began running mindfulness groups in the Greater Los Angeles VA Healthcare system as a UCLA post-doc in 2003. At first, he felt he had to keep the unconventional approach under the radar.

"In a way I was trying to keep my head down, because I really thought I would have a whack-a-mole moment when [VA leadership] found out what I was doing," he said.

"I thought, here's my moment when someone's gonna say 'why are you doing this?'" He remembered. "Instead the VA said 'so, we hear you're teaching mindfulness. Do you want to do that full time?'"

That was around the same time Tracy Gaudet arrived at the agency after leading integrative medicine at Duke University Medical Center. She's the VA's first director of the Office of Patient-Centered Care and Cultural Transformation.

"The language in my job description is to lead the most massive transformation of philosophy and practice of healthcare ever undertaken by a major health system," Gaudet said. "And that's what we're up to."

Gaudet argues the holistic approach to medicine is a natural fit for the VA.

"We are accustomed to working with all aspects of a veteran's life. It's not just health, it's finance and housing and education," she said.

According to Gaudet, prior to her 2011 arrival the VA didn't have a centralized plan for integrative care. Practitioners around the country, like Serpa in Los Angeles, were offering innovative therapies, but there was no strategy for delivering them to all veterans across the system.

"We had all the pieces. We had all these resources that conventional medicine doesn't have," Gaudet said. "Leadership finally said it's time to transform the system, and bring all these elements together, and support the people in the field doing this."

"When it's all fully implemented, it removes some of the access pressure to the clinical doorway, because people are getting help through the well-being programs and peer-support," she said. "They still use the clinic as needed, but that's less frequently, and they come in empowered."

Serpa says clinicians coming from outside the VA often don't realize the complexities of the overlapping physical and mental health challenges veteran patients can face. A VA patient may face both chronic pain and PTSD, or a physical disability, leading to depression, weight gain, and pre-diabetes.

In the past, Serpa said, prescription medications might have been the default solution. Today, patients and their doctors have more options.

In January, for the first time, VA Secretary David Shulkin released opioid prescription rates for all VA hospitals. The numbers showed encouraging progress. The overall rate system-wide dropped 41 percent between 2012 and 2017. The West LA VA fared even better, cutting its rate of prescribed opioid drugs in half in the same period.

At the signing of President Trump's executive order last month, Secretary Shulkin emphasized his top priority at the department: preventing veteran suicides. He cited the 12 month period after leaving military service as the time veterans are at the highest risk.

The President's order directs the VA and other agencies to extend mental healthcare to nearly all veterans during the first year after they leave the service.  Gaudet said her office is working to fulfill the Whole Health component of the order.

"I think the wisdom and insight of this order is the answer's not just to send everyone to a psychiatrist," she said. "That's important and appropriate when needed. But really what we want to do is support people in a transition in their life."

Gaudet said by March 9th, the VA will offer a 2-hour peer-led introduction to Whole Health for new veterans, either virtually or in-person.

"We call it the Whole Health Pathway. And it starts with this exploration of what do they want their new mission to be now that they're transitioning out of active duty?"

A more extensive, 9-week Whole Health introduction is already available at some sites, but it won't be up and running everywhere on March 9th. The VA plans to hold peer coordinator training in April and May to continue rolling out these classes for every facility.

Gaudet said the VA was already committed to expanding Whole Health to all facilities, but the order "gives us momentum to move faster, and that's exciting."

Los Angeles is a city where activities like meditation, tai chi, and yoga find a relatively open-minded audience. But wellness practices are not always an easy sell.

"I have this veteran in one of my groups now, and he'll lean back and roll his eyes," Serpa said. "It's as if kindness is the worst thing that you could possibly do."

Serpa said some veterans can hear "kindness" and think "weakness."

Or they look at the fashionable, fresh-faced yogis on magazine covers, alongside recipes for organic juice and skin care, and wonder if meditation is for them.

"There's this idea that 'Oh, that stuff is for those people, and not for a veteran that's been homeless for 20 years," Serpa said. 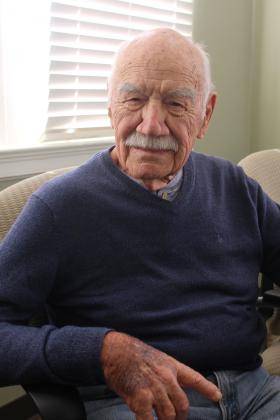 That perception melts away when veterans experience the results. According to Serpa, they report greater happiness, less stress, more functionality in life, better sleep, and less pain. Serpa said he also sees changes in brain activity show up in functional MRIs of patients who practice mindfulness.

"There's a lot less stress in my life," said Lawrence Manzo, a veteran of World War II who has been practicing mindfulness with Serpa for about three years. At 90 years old, he doesn't fit the stereotype of a hipster yogi.

"It helps me to live in the here and now," he explained. "It has to do with knowing what's going on in your mind"

Manzo is such a believer, he brings other veterans to class, and he keeps up his practice at a mindfulness drop-in class on Mondays, along with a pain management class on Fridays.

"It causes you to become very calm, and very accepting. No getting uptight," Hilliard said. "In class, we have one commonality, that we served in the military. But each person I encounter has a unique problem. I use that interaction to help myself become a more caring, giving person."

About 1.7 million troops are eligible to switch from a traditional pension plan to a blended plan that works more like a 401(k). But some lack the financial skills to evaluate their options.

Homelessness often looks different for veterans living in rural communities: Rather than living in the streets, they may be couch-surfacing, sleeping in their cars, or camping in the woods.