Struggling To Meet Recruiting Goals, The Navy Will Allow Sailors To Take A Break And Return

As the Navy plans to increase the number of ships, it's looking for new ways to keep sailors in the service, even allowing them to leave for a year and come back.

Listen
Listening...
/
Steve Walsh reports on a new Navy initiative that allows sailors to try civilian life, then return to the service.

The Trump administration wants the Navy to grow from 290 to 355 ships, and Congress has increased the number of ships in the latest federal budget.

But the Navy faces the challenge of finding enough sailors to man them, and it's looking for creative ways to keep people from leaving.

"I can tell you right now, with the type of growth we have, it's almost hard to have enough retention," said Capt. Vince Segars, Navy director of Military Community Management. "We're basically keeping every sailor who wants to stay in."

To meet its target, the Navy has to add almost 11,400 sailors for fiscal year 2019, according to the U.S. Naval Institute News. And the goal only goes up after that, according to Segars.

"Right now, our retention goals are pretty high. Probably higher, the chief of naval personnel would say, than we can attain, but we're going to try to do the best we can," Segars said.

Flush with cash from the latest federal budget, the Navy just released a new round of re-enlistment bonuses for fighter pilots, helicopter pilots, and mechanics.

"You never know what's going to be that tipping point to make someone stay in the Navy," Segars said. "It could be money. It could be a program. It could be as simple as getting the orders they want." 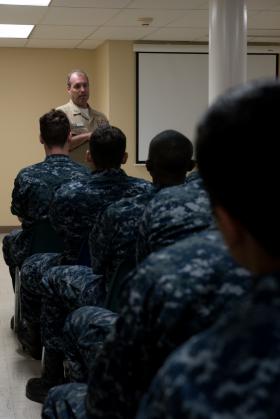 Or maybe it's the chance to test-drive civilian life for a year. Beginning in April, the Navy will issue so-called "golden tickets." Sailors who qualify can leave the service, come back after a year, and resume their service where they left off.

The Navy hopes to entice those sailors and officers who may have second thoughts about leaving or who find civilian life isn't everything they thought it would be, Segars said.

"In so many cases, and I have a lot of friends, some people regret that decision," Segars said.

Still, it is hard to turn someone around once he or she is ready to leave.

Specialist First Class Magaly Marion is taking a class called "Reboot" with other women who are about to leave the Navy. In July, she'll have 20 years of service in the military. At that time, she can retire with full benefits.

That's exactly what she plans to do.

"Nothing they could say to me would make me stay," Marion said. "I've been grateful for the 20 years they have permitted me to serve in the Navy, and I think that's long enough for me."

Her command has already asked her to stay another two years.

"It's very humbling they want you and they try at any cost, like 'Stay, stay,' but sometimes family needs come first," she said.

Her husband is a bomb technician. When their deployments overlapped, the couple saw each other for only three weeks in 2016. They have four children. The youngest is 6 and the oldest is 16.

"Since my husband and I are both military, it's just time for one of us to be here now that the kids are older," she said.

The golden ticket is part of a series of ideas under a Navy initiative called Sailor 2025. It includes dozens of programs to make Navy life easier. For instance, the Navy is working harder to stagger deployments for married couples, while a separate program allows sailors to take longer breaks in their active duty service.

Madeline Rullan joined the Navy when she was 27 years old. Four years later, she says she's ready for the next chapter in her life. She's practicing her interviewing skills and preparing her resume. Could the Navy talk her into staying?

"Maybe they could, but I already have decided that I am going to move forward," she said. "I know there are a lot of companies out there that are looking for veterans with really good, strong leadership."