Shortly after Barack Obama became President in 2009, he announced an ambitious goal -- to end homelessness among military veterans by the end of 2015. Now, at the deadline, results are mixed.

At 6:00 in the morning in Seattle's Capitol Hill neighborhood, a damp fog hangs in the air. The rain – almost a constant during winters here -- won’t be gone for long.

A large street level room at Seattle Central College is unusually bright for this hour. The floor is covered with green Army surplus sleeping bags, backpacks, and boots. Volunteers will soon distribute the items to homeless veterans to make it a bit more comfortable for them to live on the streets.

The giveway – part of a two-day effort called the Seattle Stand Down – became necessary because Seattle didn’t reach a national goal to end veteran homelessness by the end of 2015.

President Obama set the goal in 2009, one of his first pledges after taking office. Julian Castro, Secretary of the U.S. Department of Housing and Urban Development, reiterated the goal during a visit to Seattle earlier this year.

Leaders in several cities around the country, including Houston, Philadelphia, and Las Vegas, say they’ve met the goal and reduced veteran homelessness to "functional zero," which means the community has the resources in place to identify all homeless vets and offer them housing.

Seattle and neighboring King County made progress toward that milestone, but fell short. At the Stand Down, held just before Christmas, government workers, advocates, and volunteers continued to reach out to veterans to get them started on the process of finding places to live.

"All of our partners have our laptops here," said Dawn Barrett of King County's Regional Veterans Initiative. "We’ll be able to look up veterans who have already been triaged and reconnect them if they’ve lost contact with our housing providers."

She said one of the biggest barriers to housing vets here is the region's booming economy. Even many veterans with government assistance still can't cover the cost of rent or find landlords willing to give them a chance.

Unable to find them what they really need – a place to live – volunteers at the Stand Down provide Seattle’s unsheltered vets with some smaller things they can use to survive life on the streets. In addition to the sleeping bags and backpacks, veterans can pick up personal care items and other essentials. 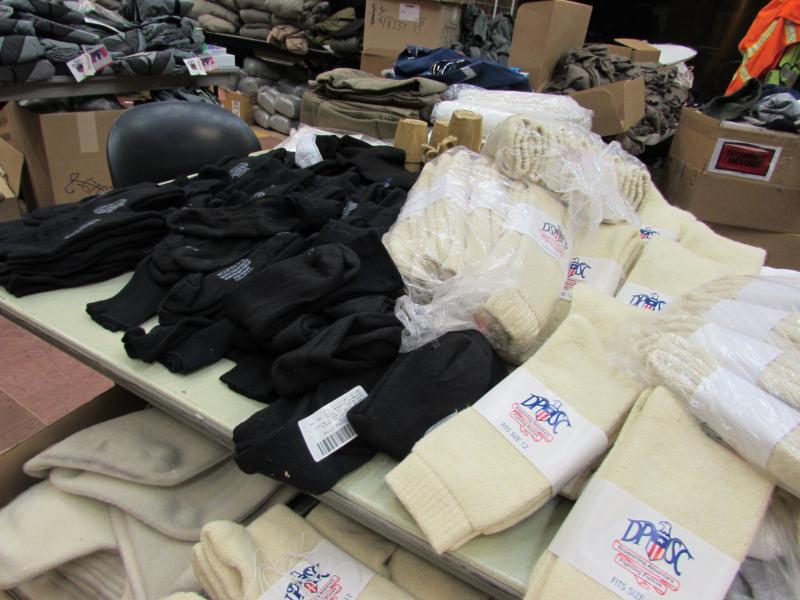 Volunteer Monique Brown, a retired Army sergeant, packed supplies for the approximately six percent of homeless veterans who are women.

"Feet are probably the biggest issue; keeping clean dry socks on," she said. "We see a lot of feet problems so we have plenty of socks for them over here and plenty of foot powder."

Brown said women on the streets are particularly difficult to reach.

"There are a lot of women who have suffered from military sexual trauma and just trauma in general," she said. "Homeless women often deal with sexual trauma as well."

Indeed, for many vets – both female and male – obtaining housing is only one piece of a complicated puzzle.

There can be mental health issues, trauma, substance abuse, and problems with chronic pain.

Amzi Gillcrese Jr. waited in line behind at least a hundred others at the Stand Down to register for services. Gillcrese said he was in the Marines and the Army between 1975 and 1983, missing the Vietnam War by thirty days.

He's staying in a shelter, but has an appointment soon to try to find housing. He also has other needs.

"I’d like to see about getting some surgery done on my hand and stuff like that," he said, as he stood in a line that had grown so long that it snaked down a stairwell, out the back door, and onto the sidewalk.

And Barrett said focusing only on the ultimate goal of totally ending veteran homelessness minimizes the improvements the county has made in the way it identifies veterans and helps them navigate off the streets.

"No one wants to hear the story about how the partners and the system have changed and the tireless work nights and weekends going over names and going over numbers," she said.

Barrett said it's disappointing for her that Seattle has not met the national goal, but she said the area's veterans groups are in it for the long haul.

"You can’t go into this work believing that it’s not possible," she said.

Greensboro's homeless population is now guaranteed a safe place to spend the night when the weather drops to dangerous temperatures. This "white flag" emergency system was created after the city's two shelters turned people away on such nights last winter because they reached capacity.

As traditional veterans organizations like the American Legion and VFW lose members, younger vets are gravitating toward dozens of smaller, more specialized groups that offer a social outlet and opportunity to serve.

The last American was drafted in 1973, but the U.S. maintains an elaborate infrastructure to re-activate the draft if Congress ever decides it's needed.

Listen
Listening...
/
John Ismay reports on the mechanics behind the Selective Service system.