School administrators often complain that they lack flexibility when it comes to improving their schools academically. In response, state education officials created the Restart program two years ago to help struggling schools. The program gives those schools a say in spending state funds, on calendar schedules and hiring flexibility—similar to charter schools. There are more than 100 Restart schools statewide.

Irvin Elementary in Concord, North Carolina, is a Restart school. It has a racially diverse enrollment of about 800 students—most are low income, making it a Title I school. Irving received a D grade from the state over the past three years. Administrators, like Irvin Elementary School Principal Tonya Williams, are trying to turn this around through Restart. 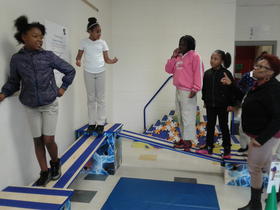 “I met with the staff and asked them what was the one thing they wanted to look at as a school and a lot of it was related to how we could improve student behavior to help improve instruction,” Williams said.

So with the new funding flexibility, Williams used state money to hire Annessia Lee as the school’s behavior coach. Lee came up with a creative way to keep students who are prone to act out or have other behavior problems interested in their classwork

In a large room called the Ready Body Lab, students are brought here for one-on-one sessions. They use equipment for structured exercises and activities so they can let off steam, while still learning.

A third-grader is asked various addition problems and then is instructed to jump up and down on a trampoline in line with his answers. It’s one of 11 stations in the room. There are activities using balls, balancing boards, cones and other equipment. Students spend one minute at each station.

“Some get it in the morning like right when they get off the bus and it helps them with their day and some get it throughout because they may need a break in between so it just depends on the student,” Lee said.

Principal Williams added, “Some kids come here after lunch or recess, because it may be  hard for them to regroup, depending on their schedule, so it’s a perfect opportunity for them  to come in before they get back to math, reading and science.”

Williams hopes the program expands school-wide, but for now, in addition to the lab, the Ready Body concept is limited to four classrooms on a smaller scale. Caroline Bowen starts her second graders off with a six-minute workout. Her students energetically rotate between catching balls in cups, stretching out on the floor, drawing curved lines back and forth and other structured activities.

“I’ve noticed a difference in handwriting and we have different seats that go along with Ready Body so they can wiggle as much as they want to but they are still working on their academics,” Bowen said. “It’s very quick, so the time I lose I gain back during the day because this is time for them to get their wiggles out and they start ready to learn, minds are more focused and this is building their confidence.”

There are 103 Restart schools statewide with 17 more set for approval in April. Nancy Barbour, the state education official who oversees the program, says any school that received a state grade of D or F for two of the past three years is eligible for Restart. Their applications must include a plan for improvement.

“We’re not looking for anything in particular (in the plans),” Barbour said. “School leaders know their schools best. It is about thinking creatively and not always doing things the way we always have done."

Barbour says schools are doing different things. Some are focusing on improving attendance or extending school hours and days. She says Goldsboro High in Wayne County is using the flexibility to hire uncertified military people from the nearby Air Force base to teach courses. When this aspect of the program was brought up at a school board meeting, several members raised concern about having uncertified people teaching low-performing students and voted against letting CMS schools apply for Restart.

“We’re certainly not advocating putting people who are not prepared or don’t know how to teach children or don’t know the content and standards to be taught, but we are encouraging schools to think differently about the skill set and do a lot of work on the front end to find folks who might not want licensure but certainly have content knowledge and know how to teach children,” Barbour said.

Thirteen Charlotte schools applied and were approved for the Restart program. One is Billingsville Elementary on Skyland Avenue. Officials there are targeting students who barely passed or just missed passing state exams. School officials felt they could make more progress with this group plus the lowest performing students already have daily and Saturday tutoring opportunities.

About 65 students in grades three through five, identified as on the edge, meet twice weekly for two hours after school. Tonya Hagood, the literacy director says they use techniques that are different, yet complement regular class instruction.

“We do things like hands-on materials where we make things alive, reading something might be through children’s theater, it might be through a play, drama because during the day it’s mostly the textbook or the teacher doing all of the talking, so this is a way to make it more fun and exciting,” Hagood said.

“This is called the moonwalk, and as they practice their moonwalk, and they’re moving, they’re calling out math facts to each other,” Scott explained. “By them moving, it helps them internalize what they are learning so I’ve seen some differences in the classroom.”

Scott excitedly points out a colorful matt on the floor with numbered squares lined up on it, resembling the hop-scotch game.

“This is the frog hop number line. Let’s say I want to do two times four. I’d have to jump from two to four and then to the next one, eight. Or they can make lunges from each number,” Scott said.

None of this would have been possible without the funding flexibility under Restart, says Principal Cheryl Turner.

“We were able to pay the teachers extended employment because they are working after their hours,” Turner said. “We were also able to purchase materials to use during the literacy and math blocks, provided transportation, snacks and purchased equipment for our action based lab.”

But is all of this helping students improve academically? It’s too early to say, says Barbour. Plus her office is still working on an evaluation process.

“Now we’re working on what an annual report might include. One of the things we’re very sensitive to is that one year of implementation of a new reform effort may not result in immediate test score improvement but we may see other positive gains,” Barbour said.

Irvin principal Tonya Williams is optimistic that her school will improve under Restart. She says that’s because leaders of struggling public schools like herself finally have the flexibility they have long needed to be successful.