Navy To Shut Down 'Combat Camera,' Which Photographed Decades of Warfare

The Navy blames cost-cutting for the elimination of its two Combat Camera units, which take photos and videos of naval operations.

Kurt Kinnamon spent almost thirty years in the Navy - mainly shooting with cameras, rather than with weapons.

Kinnamon joined Navy Combat Camera in 1958 and retired in 1985. He still works as a volunteer at the west coast unit on Naval Air Station North Island in San Diego. The unit dedicated its building to Kinnamon in October, but just a few months later, he learned Navy Combat Camera will disappear.

"I thought it was BS, you know," he said of the decision to eliminate the unit.

As he thumbs through his scrapbook, Kinnamon remembers setting up a photo lab in Saigon during the Vietnam War. Other photographers of his generation waded into the jungle with the Marines. Later they photographed the last helicopters during the fall of Saigon.

"It's mostly documentary," Kinnamon said. "To complete the job and have it satisfy whomever it was made for, that's a reward in itself." 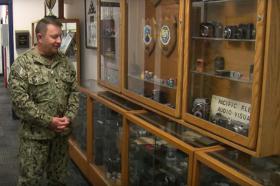 Dangerous, in-your-face shooting made Combat Camera famous in World War II. Its footage was seen in newsreels and other wartime films distributed to theaters around the country. Today, Combat Camera images are used mostly for training and Navy public relations, though the photographers see their jobs mainly as documenting naval history.

"I like to look at some of the old images because there is a story behind each photographer that took that image," said Doug Houser, who commands Fleet Combat Camera Pacific in San Diego.

Houser's unit works mainly on board ships and with divers. The San Diego unit's motto is, "We will shoot you." The Navy's other Combat Camera unit in Norfolk, Virginia shot ground combat during the last two wars.

Houser is still trying to wrap his head around being the last Fleet Combat Camera Pacific commander. He said unit members weren't surprised when the Navy announced it will end Combat Camera Oct. 1. Last year, the Navy cut the units' budget 60 percent.

The budget for Combat Camera's final year was $2.5 million, Houser said. While that's a drop in the bucket in the $171 billion Navy budget, a Pentagon spokesperson said the Navy is eliminating the units to increase efficiency.

The Army, Air Force, and Marines are keeping their Combat Camera units.

Navy Public Affairs will continue to shoot photographs of events, while some sailors will be asked to shoot video themselves with Go-Pro cameras.

What the Navy will lose are sailors trained to embed with units. For example, NASA recently asked Navy photographers to document tests of its Orion spacecraft in the waters off San Diego, Houser said. 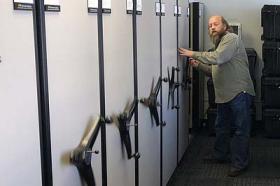 "They came to us looking for the high-end photographer who can get out there and embed with the folks who were on those RIB [rigid-inflatable] boats," Houser said. "That's what sets us apart. We become part of what they're trying to achive in the mission."

Likewise, Combat Combat personnel are prepared to be deployed alongside units like the SEALs, because the photographers undergo special training to fight as they film.

"They know our background," said Ted Banks, a Navy retiree who handles equipment for Combat Camera in San Diego. "They know our history. They basically trust us. We've earned the right to be there on the ground."

Over the next several months, the Navy will have to decide what to do with the boxes of cameras, lenses and spare batteries, Banks said. The Navy concedes some of the documentary work handled by Combat Camera may have to be contracted out.

Arthurgwain Marquez is one of Combat Camera's few remaining divers. On a recent day, he assembled his underwater camera in the San Diego dive locker, contemplating the future.

"It's not good," he said. "A lot of people hit me up, asking 'How do I become an underwater photographer?' I'll tell them our training pipeline and everything, but unfortunately, with the close down of the command, it's not going to be a thing anymore."

BMW, Microsoft, and CVS are among the companies that conduct on-base job training for service members who will soon leave the military.

Top secret Army experiments exposed thousands of veterans to potential chemical and biological weapons. Some are still waiting for follow up medical care.

As part of a recently released plan, the Trump Administration is proposing an increase in the U.S. nuclear arsenal.