Human error is likely to be among the causes of two separate collisions involving Navy destroyers. The accidents killed 17 sailors.

The top leaders of the Navy have expressed shock at the pair of recent crashes involving high tech warships - a June collision of the USS Fitzgerald with a container ship near Tokyo, and an August accident involving the USS John McCain and a slow-moving tanker off Singapore.

The collisions have been less surprising to veterans who have sailed in the Pacific. They watched the Navy grapple with issues at sea for decades.

"At a minimum there will be human error in here," said Shawn VanDiver, who spent 12 years in the Navy and served as a fire controlman on two ships in the Pacific. "There was a series of human errors that had to happen for these sort of collisions to happen."

The Navy has already released preliminary findings which suggest both crashes were preventable. In relieving the Fitzgerald's top officers, the Navy suggested the crew lost situational awareness, which the sailors call "the bubble."

"Imagine holding in your hand a soap bubble, and it symbolizes your complete understanding of what is going on around you," said Kevin Eyer, a retired Navy captain. "To lose the bubble means it pops. You don't really understand all the things transpiring around you." 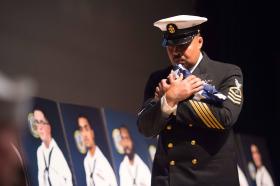 The waters around Tokyo are as crowded as the skies over O'Hare in Chicago, but the airplane analogy doesn't quite hold, he said.

"In the case of the skies over Chicago, there are external agents who are monitoring everything," Eyer said. "And that is their primary purpose to make sure those planes don't run into each other."

At sea, it is the crew which monitors its surroundings. And crews have shrunk over the years and duties have increased. Many of the sailors are handling weapons systems and listening to communication from around the globe, rather than monitoring the area around the ship, Eyer said.

Technology also can cause an information overload on the bridge, where sailors are surrounded by alarms, a radar screen, and other devices.

"In a congested waterway, that thing is going to be pinging like this," said Eyer, snapping his fingers repeatedly. "You're being overwhelmed. You've got too much information."

The bridge may dial back the range of the radar to slow down the number of pings, or they may turn-off the alarm, removing one more check and balance from the system, he said. 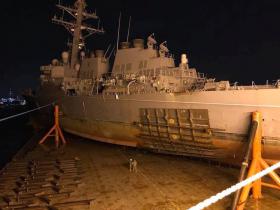 "It is not a giant leap to think that someone could have fallen asleep," VanDiver said. "This is something the Navy struggles with. I was at sea for seven years. I've seen it. I've seen lookouts fall asleep. It's cold. You're bundled in a jacket."

Watch used to be the centerpiece of a sailor's day. With smaller crews and a number of side duties, watch is now almost the downtime at the end of a day, VanDiver said.

While human error likely played a large role in the crashes, VanDiver said the Navy shouldn't place all of the blame with the crews.

"It's the worst kept secret that the 7th Fleet is tired and undermanned," VanDiver said. "I think that's not an excuse for what happened, but it's something we have to take into account."

Eyer argues chronic lack of sleep has always been a problem.

"We're paying attention to it now," Eyer said. "There are a number of things people seem to have grasped now that are clearly contributing to this whether it be maintenance, whether it be training or operational tempo, whether it be undermanning of ships."

The Navy has been trying to beef up training after scaling back its surface warfare training school 15 years ago, Eyer said.

In August, the Navy set a 60 day deadline to issue a comprehensive review of the crashes and recommend changes to Navy operations. Multiple solutions are already being floated, from adding ships to the mission in the Pacific to getting rid of some of the ancillary duties sailors perform at sea.

Ahead of the reports, the top leadership of both the Fitzgerald and the McCain have been relieved of command. The head of the 7th Fleet, Vice Adm. Joseph Aucoin, was removed weeks ahead of his retirement. Both the task force and the squadron of the destroyers involved in the collisions had their commanders removed.