The Navy is rolling out its latest plan to manage wildlife in its ocean training grounds from Southern California to Hawaii. But environmentalists worry the Navy is backsliding in its efforts to protect marine life.

Some of the Navy's most intense training happens in the waters between California and Hawaii. Carrier groups train there before they are deployed in the Pacific. The Marines practice amphibious landings along the California coast. The shallow waters off San Clemente Island are popular with the Navy and Marines.

But the sounds of training can disrupt marine life.

"Many marine mammals - beaked whales, blue whales, humpback whales - they rely on sound," said Brett Hartl of the Center for Biological Diversity. "They're communicating at levels we can't fathom with our ears."

Environmental groups have long battled with the Pentagon over training procedures in the Pacific. They're especially concerned about the use of active sonar, which the Navy uses to hunt for mines. The noise from the device can disrupt the feeding and breeding activity of marine mammals.

"If they can't hear, they're basically as good as dead," Hartl said. "It's the way they communicate. It's often the way they find food."

The Navy currently is operating under a 2015 settlement in a federal lawsuit brought by the Natural Resources Defense Council and other groups, including the Center for Biological Diversity. The agreement required the Navy to reduce the use of active sonar. Certain habitat is also off limits to the military during part of the year, including a blue whale foraging area off San Diego.

The 2015 settlement is scheduled to expire at the end of this year, and the Navy has proposed a new plan to replace it. The new plan doesn't include as many restrictions.

"Instead of in the context of litigation, we've looked at everything new using science, using what is practical for us to implement in terms of mitigation," said Alex Stone, the Navy's project manager for the new plan.

Stone said the new plan still takes into account sensitive habitat and lays out when and where the Navy can use sonar and detonate explosives.

But environmentalists contend the new plan erases some of the progress the groups fought for over the years.

"The Navy has made progress in the past," Hartl said. "Now they're sort of backsliding a little bit, and we're concerned about that because there are reasonable ways of dealing with military training and protecting marine mammals."

Most of the time Navy ships use passive sonar, essentially listening to the ocean. But active sonar — which bounces high-intensity sound off underwater objects — is more accurate. 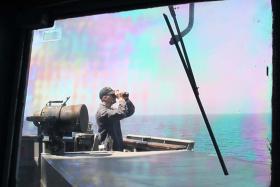 Environmentalists want the Navy to limit explosions and sonar in more areas where they know marine mammals congregate at certain times of the year. But that would likely mean fewer exercises close to shore. The Navy resists moving exercises farther out to sea.

"We want to be as efficient as we can with our training. Having our forces steam hundreds of miles even before they can start training doesn't really work well," Stone said.

During a recent training mission, the crew of the Navy destroyer USS Higgins demonstrated the measures they take to avoid injuring marine mammals. As the ship navigated the congested waters of Southern California, sailors deployed a kingfisher - a type of active sonar that trails behind the ship on a long tether.

Meanwhile, below deck, the crew monitored a map on a computer screen which tells them whether it's safe to turn on the sonar.

“It came up and said there’s no restrictions," explained Lt. Eileen Allerga. "And it tells us, if a whale comes this close to you, make sure you power down sonar by this much.”

The Navy also trains spotters to scan the horizon for marine mammals. The spotters are supposed to shut down exercises if they see a whale breaching nearby.

But even trained spotters can't see what's under the water. Species like endangered beaked whales off Hawaii aren't easy to locate, Hartl said.

The Navy is seeking approval for its latest plan from the National Marine Fisheries Service. It's also trying to work through disagreements with the California Coastal Commission, which unanimously rejected the new plan in June. Though the Navy does not officially need the Coastal Commission's approval, the Commission has been a party to lawsuits over the last two plans.