Hundreds of troops have arrived to assist Border Patrol agents.  But National Guard operations are not yet fully underway.

Maria Reyes lives in Mercedes, Texas, just a couple miles from the banks of the Rio Grande. A gravel road leads to her home, on a shaded property squeezed between the river's floodplain and a nature preserve.

Reyes is no stranger to the U.S. border patrol. They park their vehicles nearby and often walk the perimeter of her property. Reyes' dog Butch is so used to their presence that he doesn't even bark anymore.

"I've seen them practically every day at different times," she said. "Sometimes there's more than one."

Reyes doesn't go out at night because she said she's concerned about her animal neighbors: coyotes, wildcats, and javelinas. They roam the area looking for water, which she sometimes leaves out in containers. But Reyes struggles to remember the last time she encountered someone on her property who'd crossed over illegally.

"We haven't had that much of a problem with people coming in here," she said. "Several times, someone passed by and they just needed some help. … If you get into this area, and you don't know the area, you're gonna get lost."

Still, Reyes remains open to the idea of having National Guard members stationed along the border.

"They're doing what they're told to do," she said. "I think if their way of helping is making sure that nobody crosses and telling the border patrol what's happening, … I have no problem with that."

He spoke in the border town of Weslaco about what he called a "chaotic border environment" and said Border Patrol doesn't have enough resources to counter the threat.

"So we do not have control," Padilla said. "Let me be very, very clear on that. We do a great job as an agency, as an interagency partner. But at the end of the day, we still have a lot of traffic." 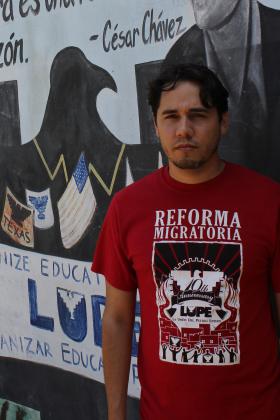 Texas Governor Greg Abbott, a Republican, enthusiastically supports President Trump's plan to secure the border. He defended the mission in a briefing with National Guard troops at Weslaco Armory, one of the staging areas for missions in the Rio Grande Valley.

"This operation is necessary in order to deal with what has been an escalation of cross border traffic," Abbott said.

National Guard members don't have the authority to make arrests. Instead, they'll support border patrol operations by clearing roads, maintaining vehicles, and providing air surveillance. Others may help out at ports of entry.

According to Padilla, the Rio Grande Valley border patrol sector has requested about 458 National Guard members. That number, he said, could increase.

But for some residents of the Rio Grande Valley, the Guard's presence is puzzling or downright unwelcome. Organizers from the immigrant aid organization La Union Del Pueblo Entero gathered to protest what they call militarization of the border.

"This is a border zone, not a war zone," they chanted.

John-Michael Torres was among them. He's seen past National Guard deployments to the area and said by freeing up Border Patrol agents, the deployments create more opportunities for abuse.

"They (Border Patrol) don't have a whole lot to do. If we keep giving them resources, they're gonna find things to do," he said. "And part of that is harassing members of our community."

Torres challenged the notion that border patrol agents operate only on the border itself.

"Even though a lot of people imagine that border patrol is tasked with keeping people from crossing that international line, in reality, Border Patrol can go after anybody that they encounter without documents," he said.

In the past, he said, these factors have caused border residents to lie low and put a damper on the local economy.

"A lot of people wouldn't go out unless they had to," he said. "They stopped living vibrantly in their communities, stayed indoors unless they had to go out. …. People weren't doing the things that they normally would do."

A short drive north of the border, Xavier Reyes prepares drinks behind the counter of Weslaco's Daily Grind, a coffee shop that draws a mixed crowd of snowbirds and locals.

"We've had a couple of them show up into the coffee house, but nothing major," he said. "I haven't seen a lot of traffic."

He said he doesn't have a strong opinion about the National Guard deployment, but he worries that attitudes in the country are turning against immigrants.

"I hear a lot like, 'Oh they come over here, they steal our jobs.' Or they're doing this and that," he said. "I just feel maybe there's a lack of empathy and understanding going on right now. I don't think it's going to end well."