For Military Kids, Switching Schools Can Land Them In The Wrong Classes

Kids in military families average six to nine moves before they graduate high school. That means navigating new schools, finding new friends, and catching up in classes ... over and over again.

Listen
Listening...
/
Sarah Harris reports on the difficulties military children may have when they change schools.

Tamara Boyett is a senior at Indian River Central School in northern New York. Her Dad's in the Army, and her family has moved a lot.

"I'm not even sure I can't count," Boyett laughed. "This is the fifth place that I've lived, so I have New York, Oklahoma, Texas, Hawaii and Kansas."

It hasn't always been easy. She once moved to a new school two months before the end of the year.

"I had to catch up so much in all that work, because there's different testing requirements," she said. "It was just really hard to adjust in such a short time, especially in school because summer was coming up."

1.1 million school age kids have parents on active duty. On some bases, the Department of Defense runs its own schools for military children, but the vast majority of military kids go to public schools.

Under an agreement signed by all fifty states, schools are required to transfer military students' records quickly, accept standardized test results from other states, and place kids at the appropriate academic level. But advocates say some schools aren't aware of  the requirement or don't follow through.

If students aren't placed in the right class, Ballantyne says they can end up bored or struggling to catch up. So his organization is working to educate parents and teachers and figure out a better system. 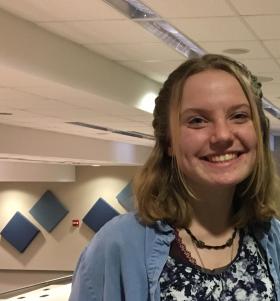 Tamara Boyett's school, Indian River Central School District, is near Fort Drum. More than sixty percent of its students come from military families, and it does a pretty good job getting kids into the right classes.

On a recent day, middle school counselor Jenna Gianfanya was processing paperwork for an incoming student. But there's a hitch.

"The student's first language is German, and his records all came to me in German, Gianfanya said. "So we're working on getting that translated so that we can figure out our best programming for him and certainly get him connected with our ESL classes and things like that."

Academics aren't the only issue for military children. Getting used to a new school can be tough socially, and a parent's deployment can hit kids pretty hard.

"A loved one's going to be away. A loved one may be injured," said Fort Drum school liaison officer Matt Rogers. "And it really prompts them to ... better understand if our family's really going to thrive, what am I going to need to do to pick up the slack?"

Counselor Jenna Gianfanya says that's when the routine of school is really important.

"A lot of times school is their escape," she said. "Sometimes just being in school and keeping up with a daily routine is helpful for them."

Anna Risinger has two kids. Her husband's in the Army. They've moved three times and gone to four different schools. Her daughter's in advanced classes, and her son needs extra help. She's gotten used to advocating for her kids.

"With every move we have to re-set up and be prepared to make sure each school is meeting each one of their needs," Risinger said.

At Indian River School, she didn't have to do much advocating. The school placed her son and daughter at the correct level right away, and it provided things like a military family life counselor and "buddies" for her children during the first week.

"They really just took a little extra care of our kids because they understood the struggle of being military," she said.