A lawsuit by families of victims of the mass shooting at Sandy Hook Elementary School has the potential to significantly change what the world knows about how the gun industry thinks and operates. After years of delays, the lawsuit is moving forward, which may force the gun industry to make public what it considers private.

On December 14, 2012, 20 first-graders and six staff members at Sandy Hook Elementary School were shot and killed by a 20-year-old man within minutes. The mass shooting shook the nation, surpassing the carnage of 1999’s Columbine High School shooting, in which 12 students and one teacher were fatally shot.

Two years later, the families filed a lawsuit alleging that the gun manufacturer Remington Arms Co. should be held responsible for selling a rifle to the civilian market that “posed an unreasonable and egregious risk of physical risk to others.” The suit suggests that the company should have known “the unreasonably high risk that the [Bushmaster] XM15-E2X would be used in a mass shooting to inflict maximum casualties before the law enforcement was able to intervene.” Remington is the parent company of Bushmaster and its associated brands.

After the Connecticut Supreme Court in March 2019 allowed the lawsuit to move forward and the U.S. Supreme Court declined to hear the company’s appeal, the case is scheduled to be in a Connecticut court in 2021.

Now, lawyers on both sides will gather information through discovery. That process will offer a rare window into how the gun industry operates, according to Timothy Lytton, a law professor at Georgia State University who has written extensively on the liability of the gun industry.

“The litigation is likely to put pressure on the gun industry, even if Remington wins, to think about maybe altering their designs and some of their marketing techniques and their distribution practices,” he said. “It might have a marginal effect on reducing, for example, the lethality of new weapons that are being designed or the risk of illegal straw purchases through controls in the supply chain. And also the promotion of a culture that tends to glorify gun violence in certain segments of the market.”

Digging In: The Discovery Phase

During the discovery phase, the plaintiffs plan to request internal emails, marketing campaigns, documents — as much as they possibly can from Remington. And they plan to get depositions from decision-makers at the company. The plaintiffs’ lead attorney, Josh Koskoff, said Remington has already filed a motion arguing that some of the material the company turns over should not be released to the public.

“Our lawsuit has always been about getting to the bottom of how it happened that a ‘military weapon’ was promoted in such a way as to encourage its use as a ‘military weapon’ in the civilian population,” Koskoff said, “and the way in which it was marketed towards the highest-risk user as opposed to the mature sportsman.”

Remington declined requests for comment. But Lytton, at Georgia State University, says Remington will continue to push back against those claims.

“One thing Remington’s likely to do is to suggest that its marketing campaign that sort of extolled the features of the weapon and its attempt to try to attract a larger market, especially among younger males,” Lytton said, “is nothing out of the ordinary, is not particularly unethical. It’s not an unfair trade practice, it’s basically standard operating procedure in the firearms industry. And my guess is that they’re going to probably try and frame this much the way you try and sell a fast sports car to the types of people who might be prone to drive fast.”

The families’ lawsuit references the phrase, “Forces of opposition, bow down. You are single-handedly outnumbered,” which appeared in a 2010 Bushmaster product catalog and, “When you need to perform underpressure, Bushmaster delivers,” from a 2012 catalog, as examples of language they say is problematic. 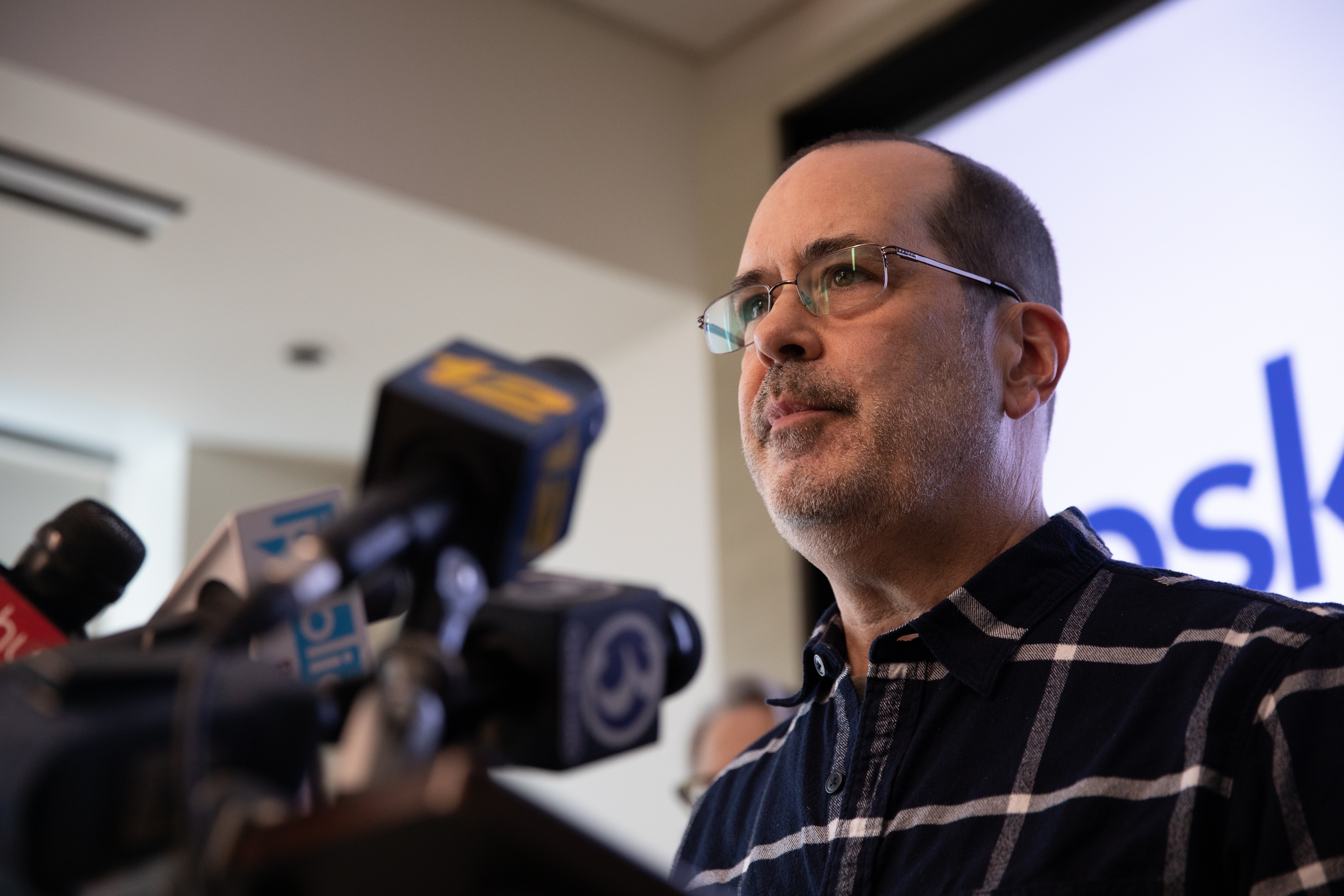 David Wheeler is among the plaintiffs in a lawsuit against Remington Arms Co. His son Ben was one of the students killed at Sandy Hook Elementary School.

The Strength Of Federal Law

A 2005 federal law known as PLCAA, or the Protection of Lawful Commerce in Arms Act, generally immunizes firearms manufacturers, distributors and dealers from civil liability for crimes committed by third parties using their weapons. That has made it difficult for plaintiffs to persuade the courts to allow lawsuits against gun manufacturers.

While the families of eight victims who were fatally shot by the Washington D.C.-area sniper in 2002 won a $550,000 settlement from gunmaker Bushmaster Firearms Inc. and $2 million from gun seller Bull’s Eye Shooter Supply in 2004, another victim’s family’s lawsuit against Bushmaster in 2009 was struck down because of PLCAA protections. The snipers, like the Sandy Hook shooter, also used a Bushmaster XM-15 model rifle.

In many cases, when plaintiffs have attempted to use state statutes, ordinances and regulatory rules to circumvent PLCAA, state and federal judges have ultimately ruled that those claims lack enough legal substantiation to thwart its protections.

That was the case when the Sandy Hook families attempted to claim that Bushmaster “negligently entrusted to civilian consumers an assault rifle that is suitable for use only by military and law enforcement personnel.” A Connecticut Superior Court struck that claim down in 2016, stating that it was “legally insufficient” because the plaintiffs did not establish that the shooter’s mother, who had actually purchased the rifle, “was likely to use the rifle in an unsafe manner or in a manner that would involve an unreasonable risk of physical harm.”

But the plaintiffs also alleged that Remington violated the Connecticut Unfair Trade Practices Act (CUTPA), a state law, by marketing the rifle using military-inspired imagery and rhetoric that talked about fighting enemies and carrying out missions. CUTPA does not allow business practices that are “immoral, unethical, oppressive or unscrupulous.” This claim was initially dismissed as well, bringing the lawsuit to a halt.

The families say that Remington marketed the rifle used in the mass shooting differently than it advertised its hunting and recreational rifles by “extolling the militaristic and assaultive qualities of the rifle and reinforcing the image of the rifle as a combat weapon that is intended to be used for purposes of waging war and killing human beings.”

Though the CUTPA-based claim was initially struck down by a Connecticut Superior Court, the state Supreme Court reversed that decision in March 2019.

Attorneys for Remington appealed to the U.S. Supreme Court, arguing in October 2019 that the lawsuit is “exactly the kind of case arising from a criminal’s misuse of a firearm that may not be brought in any federal or state court.” Remington said the families used CUTPA “to implausibly claim that a firearms manufacturer’s advertising caused a criminal’s mass shooting.” A month later, however, the Supreme Court declined to hear the gun manufacturer’s appeal.

Now the plaintiffs must work to prove their CUTPA claim in Connecticut courts.

“This lawsuit really establishes how effective the industry has been in avoiding lawsuits for this long given the amount of damages that their products cause,” said Koskoff, the lead attorney for the families. “At the same time, I think it really is a testament and stands for the perseverance of the families I represent who undertook this lawsuit knowing full well that it was going to be a battle and knowing full well that was gonna take a lot out of them emotionally.”

There are notable parallels between legal action against the gun industry and the history of the tobacco industry. After years of legal battles, tobacco companies were forced to hand over millions of documents throughout the 1990s that showed they knew that smoking was dangerous.

“I think we can see that tobacco playbook in general being deployed by the gun industry and in this litigation, there may well be documents that show or shed light on the role of an individual corporation,” said Lisa Graves, with the Center for Media and Democracy, a corporate watchdog organization. She has been examining the tobacco and gun industries since the 1990s.

“I don’t think that they should be able to rest behind defenses that they’re not responsible at all for how their product is used, especially when it’s used specifically, in essence, as designed,” Graves said.