A former Air Force medic and the famed acting school Second City are teaming up to offer veterans a new tool for the transition back to civilian life: comedy improv.

It's the first time the school – known for producing talent like Tina Fey, John Belushi and Steve Carell – is offering a class at its Hollywood site by and for veterans.

"This is a place that we build a nurturing environment where they can truly build themselves back up," said B.J. Lange, 37, a retired Air Force medic and the instructor for the class.

Lange, a native of St. Louis, studied acting and improv while training in the Air Force Reserve. He said for him the creative outlet was key to helping navigate the demands of military life and an abrupt transition back to civilian life last year, after he was diagnosed with cancer and forced to take an early medical retirement from the Air Force.

"Improv really became my heart and soul," he said.

The goal is not just to build confidence, but to teach the tenants of improv – quick-thinking, teamwork and trust – that veterans can also apply to daily life.

"They can get these skills from improv and help them with whatever they need it for, whether it's a coping mechanism, problem-solving, or they just want that community aspect," said Lange.

During the group's first class, seven students gathered on the second-floor classroom above Hollywood Blvd., where a brick wall lined one side of the narrow room and the sound of traffic punctured the class introductions.

They described coming for different reasons – some were aspiring actors, others were taking a class like this for the first time. But many described sensing an immediate camaraderie with their fellow veterans.

That's key, said Cristin Bartter, a Marine veteran who said she knew a lot of former soldiers who battle with isolation after service.

"A lot of times people feel like they're just so disconnected and ostracized," she said. "So to be able to have a space and to be able to provide that to other folks, and veterans especially, is just really positive and really cool."

Still Bartter, who had never taken a class like this before, said just staying through a whole session was a big step for her.

But mid-way through the class, she was pitching jokes in a circle of other veterans as they laughed and cheered.

"As terrifying as it is, it's also exhilarating," she said.

That sense of connection is what also drew Juston Graber to the class. He said he deployed four times in the Army – three tours to Iraq and one to Afghanistan – and getting back to civilian life hasn't been easy. 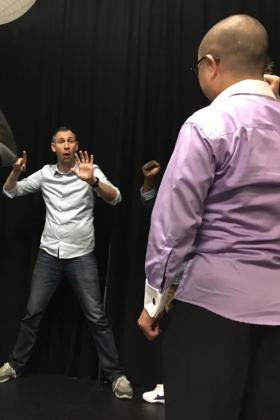 "Once a soldier, always a soldier, so I'm always going to have that mindset and that mentality," he said.

But Graber found freedom in acting and improv and even started his own improv troupe when he returned to school at the University of Southern California.

"The thing with improv is I feel there is no judgment because everybody has everybody's back regardless of your background," said Graber. "The judgment factor goes away, so I find it easier to fit into those groups."

Improv, if anything, is unpredictable and when teaching veterans that can be an added challenge, said Lange, the instructor.

"There are triggers," he said. "Some folks in the military may have PTSD, they might be dealing with stuff that a civilian might not be familiar with, so I have got to take those into consideration."

Throughout the class, he made references to military life as a way to drive home a point and checked in individually with students to see how they were taking it all in.

At times, the fast-paced class was interrupted, as a student asked for clarification on an activity – but, as the class stretched into its third hour, more laughter erupted in the classroom.

One of the students, James Taku Leung, said he wished courses like this were taught when he was first getting ready to leave the military. It would have made that transition a lot easier, he said.

"We came from a place where we had purpose and pride and suddenly we're in a world where we don't have direction," said Leung, who served in the Marines in the 1990s.

"Learning how to give yourself direction without a set of directions is a very powerful tool," he said.