Thousands of military households rely on government food assistance programs, but the Pentagon doesn't track how many service members have trouble feeding their families.

Kara Dethlefsen lined up early on a recent morning for the food pantry at the Camp Pendleton Marine Base near San Diego. She and her husband, both active duty Marines, took turns holding their 4-month-old daughter.

"We most like to get the avocados, lemons, some vegetables to cook up," said Dethlefsen, 27, who first heard about the pantry from an on-base nurse after giving birth to her daughter.

"This probably saves us anywhere from $100-300 each time we come," she said. That's key for her young family. Her husband is getting ready to transition to civilian life after 5 years of military service, she said, and they're not sure what financial challenges that could bring.

The food pantry is run by Saddleback Church, one of several faith-based groups that operate on base to bring donated food to military families every month. The pantry offers fresh fruit and vegetables, canned food, meat and baby items, like diapers. Typically, about 100 families show up, according to Saddleback pastor Steve Mahnke.

"I always tell my friends, my neighbors, I show them what I got and they seem to be coming," said Sarai Vizcarrondo, 41, as she pushed a cart of produce and canned goods to her car. She said the pantry helps meet the needs for her family, which includes two teenage children and her husband, an active duty Marine. 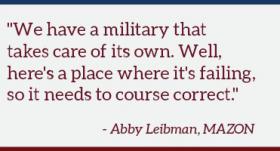 Though families described different reasons for coming, the food assistance points to a real need among the military, said Abby Leibman, President and CEO of MAZON: A Jewish Response to Hunger, an advocacy group based in Los Angeles.

"There's nothing that makes you feel more vulnerable or undermines your ability to live your life than not knowing if you're going to be able to feed your family," said Leibman.

Her group tracks the food assistance programs, such as pantries, available to military families across the country. She said there are hundreds of pantries on or near most bases or installations that are designed specifically for active-duty military families, calling it a "serious indicator" that a need is not being met.

"It's about a system that was designed to support them that is failing in that goal," said Leibman. "We have a military that takes care of its own. Well, here's a place where it's failing, so it needs to course correct."

In July 2016, the Government Accountability Office submitted findings to Congress that showed the Department of Defense was not fully collecting or analyzing data on how many service members were in need of food assistance or enrolled in federal programs, such as the Supplemental Nutrition Assistance Program, or SNAP, and the program for Women, Infants and Children, known as WIC.

At the same time, it found troubling signs that some military families were in need. For example, nearly one in four children at DOD  schools are eligible for free meals, a program that's based on income. Also, about 23,000 active-duty service members rely on SNAP benefits, formerly known as food stamps, according to the 2013 Census Bureau.

"This suggests that people serving our country may be having difficulty making ends meet," the GAO report stated.

It called on the DOD to revise its surveys for service members and track more closely their use of and eligibility for food assistance programs. It also called for better coordination with the USDA.

"Without more complete survey data, DOD will not understand the prevalence of need among servicemembers to effectively target its support and determine if it should assign department-level responsibility for monitoring food assistance needs," the report concluded.

In response, the Pentagon said at the time that it "concurs" with the GAO recommendation to collect and analyze "more complete data on the use of food assistance programs by service members and their families and use the data to determine if any further actions are needed."

But nearly a year later, it appears that the DOD has not changed how it tracks data on the issue.

"This particular issue crosses multiple offices within the DOD in terms of policy responsibility," said Johnny Michael, a DOD spokesperson. "Each of those offices takes their specific policies very seriously. They look at things like the GAO report and try to improve whichever policy they're responsible for in terms of taking care of our service members."

He declined to comment on whether specific offices, such as the Defense Health Agency or the Defense Manpower Data Center, both cited in the GAO report, have made specific changes or had changes underway in response to the report. But he added, "They have read it and they are certainly taking those recommendations into consideration."

Lower enlisted ranks the most vulnerable

When her husband was stationed to San Diego's Naval Base in 2010, Ashley Butler began a meticulous accounting of their household expenses. She kept track of gas costs. She bought bulk items along with other military families. She limited trips home to see family back in Wichita, Kansas.

Her husband was an enlisted Naval Seaman, and with two young daughters under 10, they were finding it hard to make ends meet.

"You stretch as much as you possibly can," she said. "It's stressful because you want to make sure you can feed your family."

They qualified for WIC, the federal program for mothers and young children, and Butler, who was 27 at the time, went to the food pantries nearby. But it was still a challenge – and she knew other families who were having a hard time, too.

"The people who are struggling don't want to talk about it, they're embarrassed by it," she said, adding that her own relatives shared the misconception that all military members earn a high salary. She sought to break that stigma.

"People need to be made aware that this is happening," she said.

Service members who qualify and receive federal food assistance make up a small percentage of the overall active duty population – barely 2 percent of the force, according to the USDA.

But that number tends to draw from a particular slice of the military: lower ranking enlisted members with children.

An enlisted service member, for example, starts out earning $1,449 per month, according to the Defense Department's Office of Military Compensation as of January 2016. If they have three children, that could make them eligible to receive SNAP benefits, according to USDA criteria that defines federal poverty levels.

But the Pentagon notes that the pay scale rises as the service member stays on duty. Troops also receive additional benefits, including health and dental care, childcare and, at times, a housing allowance. By the time the service member rises to an E-4 rank, he or she earns $2,046 monthly.

Still, there are indications that food stamp data only shows a partial picture. For example, in a recent survey run by military spouses, called Blue Star Families, 7 percent of active duty families said they faced food insecurity over the past year. Taken as a percentage of the overall active duty population, that would be more than 80,000 families nationwide.

Butler, the Navy spouse from San Diego, moved with her family to Ridgecrest, about three hours north of Los Angeles, in 2014. Her husband has since been promoted, which has helped ease the financial pressure. But the move also came with another challenge: the remote area lacks the support programs, like the food pantries and the discount food stores of San Diego.

"We still struggle," she said, adding that her husband first joined the military because he was drawn by a sense of duty to serve his country. "I feel like we're being penalized because he wants to do good and I shouldn't have to feel that."

In the short term, advocates are calling for the government to close a loophole that could make more military families eligible for SNAP.

Currently, the funds that a service member receives for living off-base, known as the Basic Allowance for Housing, is counted toward eligibility for SNAP. When that's added to the family's income, it pushes some into a higher bracket.

Congresswoman Susan Davis, a Democrat from San Diego, has introduced legislation that would change that by excluding housing allowances from counting toward SNAP eligibility. It's called the Military Prevention Hunger Act, or HR1078. The bill is currently assigned to a congressional committee.

Abby Leibman, of the advocacy group MAZON, said she supports the measure, which her group estimates could double the number of military families who receive SNAP. But she added that it only addresses part of the larger issue which calls not just for political or military leaders to respond, but for society as a whole.

"This part of our community is not being served and that's our responsibility because they are sacrificing so much for us," said Leibman. "It becomes our obligation."