A growing number of homeless veterans are women. But there are few places that specialize in helping them get back on their feet.

The federal government estimates that on any given night, 3,000 to 4,000 female veterans are homeless.

But that estimate is probably on the low side,  according to Sara Scoco, who directs the Women's Program of the nonprofit group Soldier On.

"When people are doing homeless counts, they're going to shelters, they're seeing people on the street," Scoco said. "A female veteran is not the person you see on the street holding a sign."

Instead, she holing up in her car or couch surfing at friends' houses.  She might be a single mom, or she may have experienced sexual trauma.

"The issue of female veteran homelessness is so underlooked, understudied," Scoco said. "It's not understood because it's not in your face all the time."

So Soldier On decided to do its part by building a transitional-housing facility just for women.

In a bright and airy three-story building on the Department of Veterans Affairs campus in Leeds, Massachusetts, the organization's Women's Program houses sixteen women. It caters to their special needs with things like art and yoga classes, support groups, and job counseling.

"A lot of women that come to us have really lost everything," Scoco said. "They've lost all sense of hope. And so all of what we do is build them back up."

Scoco said all of the residents suffered some sort of trauma before, during, or after they served.

61-year-old LouAnn Hazelwood, who was in the Army in the 1970's and 1980's, said her verbal, physical and sexual trauma started early in life.

"I more or less wanted to join the military as a way of escape," Hazelwood said.

But she experienced more trauma in the military and after she got out. When she came to the Women's Program, she was fleeing her second abusive marriage and was so traumatized she didn't speak. Being only around women made her feel safer.

"For me, it was a way of recouping from all the abuse that I went through." Hazelwood said. "I have yet to totally trust being around a man."

33-year-old Page is another resident of the Program. The former Air Force technician asked that we not use her last name. 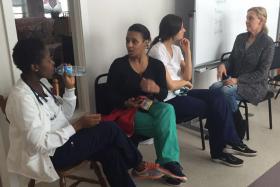 She struggled with depression and self-esteem issues long before she enlisted. She thought being in the military might help.

"I was thinking I was going to get some sort of approval and pat on the back," she said.

Instead, Page got verbally harassed -- called "whore," "fat," and "bitch" -- and she fell into a culture of drinking.

"I remember going through Walmart after work one day; this is when I was drinking," she recalled, "and I wanted to crawl under a rock and die because a lady stopped with her daughter and pointed to me and said, 'See honey? That's a hero.'"

She confided in a therapist, but said he threatened to have her thrown out of the military. In the end, she was allowed to resign with an honorable discharge.

After rotating through several co-ed detox programs for veterans, she found the Women's Program.

"I haven't had a drink since," she said.

By 2020, the number of female veterans is expected to reach 2.2 million. So Scoco said there's an intense need for more gender-specific services. But demand for women-only services vastly exceeds supply. For the sixteen rooms in Massachusetts, the Women's Program often has a waiting list and has received referrals and applications from as far away as Hawaii.

Mother's Day Can Be Difficult When Mom Is Deployed

The Pentagon doesn't track how many deployed service members are mothers (or fathers). But being a parent while serving the country creates unique challenges.

When service members return from the battlefield with lifetime disabilities, their spouses often become full-time caregivers.

A Surprising Finding About Psychological Trauma: In Some Ways, It's Beneficial

The debilitating effects of post traumatic stress are well documented. But studies suggest that surviving trauma might also lead to personal growth.