Hepatitis C Is More Common In Vietnam Vets, But Nobody Is Sure Why

Some veterans say they contracted hepatitis from the "jet gun" that was used to immunize them in the Vietnam era, but researchers haven't proven that link.

Listen
Listening...
/
Sarah Harris reports on an effort to get Vietnam vets checked and treated for Hepatitis C.

On a busy morning at the North Country Regional Blood Center in Plattsburgh, N.Y., several Vietnam veterans came to get tested for hepatitis C.

"A lot of my friends have been harping on me, and a lot of veterans in the local area have been getting this test done," said retired Air Force pilot Scott Johnson as he waited for his test.

When it was his turn, blood bank supervisor Christina Beck pulled out a tiny needle and drew just a little blood. Johnson looked away a little squeamish as the test was done. Twenty minutes later, his results come back negative. 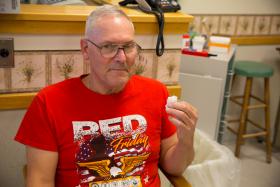 Johnson was fortunate. According to VA study and other research, Vietnam veterans are at least twice as likely to have hepatitis C.

"I always felt like hepatitis C was a little Pac-Man, just destroying your liver one bite at a time," said Vietnam vet Danny Kaifetz, who organized the clinic. When Kaifetz was diagnosed with hepatitis C a couple years ago, he was totally blindsided.

Kaifetz wanted other veterans to know they were at risk. So he starting organizing hepatitis C testing clinics and lobbying state and federal legislators for better testing and treatment.

The reasons that Vietnam vets are more likely to have hepatitis C are disputed. Kaifetz blames a device called the "jet gun injector" that the military used to vaccinate service members during the Vietnam era. It generated a burst of air pressure to force the vaccine under the skin.

"It was supposed to shoot the injection through your skin cells without piercing the skin with a needle," Kaifetz explained.

Even though the gun wasn't supposed to break the skin, a lot of veterans say it made them bleed. The gun usually wasn't sterilized between each use.

The jet gun injector has never been proven to spread hepatitis C, though the VA says it is scientifically possible. A 2005 VA study concluded that other factors were likely to put veterans at higher risk: intravenous drug use, blood transfusions, tattoos, or time in prison.

Joseph Boscarino - an epidemiologist, social psychologist, and Vietnam veteran himself - said the VA study is flawed. Boscarino led his own study comparing veterans outside the VA healthcare system with civilians their same age. 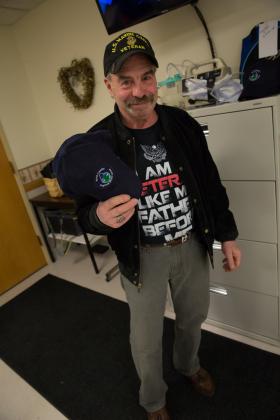 "What we found," Boscarino said, "was that Vietnam veterans, contrary to urban legend, have actually lower rates of drug abuse than their cohorts that are non-veterans."

"A lot of the veterans said another reason," Boscarino said. "We asked them what that was, and they said the injection devices that were used during the Vietnam War."

Boscarino himself was immunized with the jet gun. As an epidemiologist, he said the gun's role in spreading hepatitis C is still an open question.

"I don't know if it can ever be proven at this point," Boscarino said. "It's too many years ago."

Hepatitis C is now curable, thanks to antiviral drugs. In 2015, Congress appropriated $1.5 billion that allowed the VA to pay for veterans to get those drugs. Since then, the VA has treated more than 100,000 veterans for hepatitis C, and it's tested 80 percent of veterans in its healthcare system.

Danny Kaifetz said the problem is that not all veterans use VA health care. He wants the agency to do more, and "test every Vietnam veteran for hepatitis C regardless of VA eligibility."

Kaifetz said taking care of Vietnam vets' health is a way to honor their service. And it starts with a single blood test.