Beginning this month, tattoo enthusiasts who serve in the U.S. Navy can ink a lot more of their bodies. The new policy is designed to help recruit millennials, who sometimes have been turned away from military service because they have too much body art.

When the USS Toledo pulled into the naval base in New London, Connecticut, tattoo artist Adam Hillyer's phone started ringing.

After spending weeks at sea, there's a tradition that Navy sailors add a new tattoo to their collection.

"They do generally gravitate towards tattoos that can be done in one sitting," Hillyer said.

But not everyone; some sailors like body art that makes a bigger statement.

Since the beginning of May, tattoo enthusiasts who serve in the U.S. Navy can ink a lot more of their bodies.

A Navy policy change allows sailors to get more tattoos and larger ones. Tattoos can now extend below the elbow and knee. And for the first time, sailors can have tattoos up to an inch on their necks.

Navy Petty Officer First Class Mike Spittler already has a nautical scene with Poseidon, the God of the sea, tattooed on his right arm from his shoulder to his wrist.

Now, Hillyer is adding an ornate caricature of a fortune teller on Spittler's left arm. The piece is large enough that the fortune teller has her own tattoos.

"It's a black and gray piece, but her tattoos are blue so they stand out on her," Spittler said. "At some point you get so tattooed your tattoos get tattoos."

Tattoos are such a big part of Spittler's lifestyle that he's not just a client here, he actually owns this place, which he balances with his shore duty in the Navy. 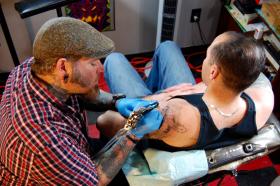 Spittler is happy to see the regulations loosened. He said there's no reason to exclude people from jobs simply because of their body art, even if they have as much as he has: both legs, his right arm and a growing area of his left arm.

"Eventually this whole arm is going to have to do with my family," Spittler said.

At the Office of Navy Personnel, Lieutenant Commander Nate Christensen said the Pentagon's commitment to professional appearance hasn't changed, but young people have. He said strict tattoo limits made it hard to recruit.

"This policy change really is about being honest with ourselves and ultimately putting policies in place that reflect tattoo realities across America," Christensen said. "We have the most talented sailors we've ever had in the Navy, but this is also about looking forward and making sure that our recruiting and retention numbers are as good in the future as they are today. "

Of course, while millennials are getting more tattoos, body art is nothing new in the Navy. At the Puget Sound Navy Museum in Bremerton, Washington, there's a whole exhibit devoted to maritime tattoo history.

Curator Megan Churchwell traces it back to the 1700s.

"You would use the big needles that you use to sew a ship's sail, and then you'd dip it into the ink and then poke it into the skin," Churchwell said.

At the time, tattoos were more practical than decorative. A sailor would get his initials and maybe his birthdate tattooed so his body could be identified if he died at sea.

"It was a very painful process," Churchwell said. "This was on a ship using unsterilized materials that you just had on board with you." 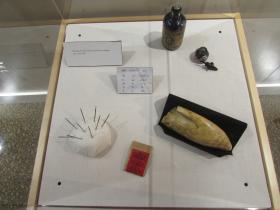 There were few formal content restrictions until 1909, when the Navy issued the first regulations against obscene tattoos. From that point forward, the voluptuous bodies of pin-up girl tattoos had to be clothed just enough to get by.

Still, Navy policy has always been subjective. When Spittler joined, some of his tattoos were already bigger than regulations allowed.

"I was required to go and sit down in front of a pretty high ranking officer at the time when I was doing my initial contract and my paperwork," Spittler said. "The big things that they were concerned with at that time was tattoos that were possibly gang related or had some kind of negative meaning behind them."

Even with the Navy's changes, some ink is still taboo, like head tattoos, symbols of gangs or extremist groups, or obscenity.

Tattoo regulations in the other service branches haven't changed.

Service members with Other-Than-Honorable discharges receive no veterans benefits and are much more likely to become homeless. But the military has no consistent standards about who gets a dreaded "OTH."

Four Years After Repeal of 'Don't Ask, Don't Tell,' Much Is Left Undone

More than four years after the military’s discriminatory policies against gay and lesbian service members ended, veterans advocates say the Pentagon has not done enough to help the roughly 80,000 troops kicked out of the services for being gay since World War II.

An initiative at several veterans hospitals adds something new to patients' medical records: their life stories.