During a San Diego training exercise, the Marine Corps tried out some new tools to enhance its amphibious landings.

The Marines are formulating a new plan for storming a beach, something they haven't done in six decades.

During Dawn Blitz - a recent West Coast training exercise centered in the waters around Camp Pendleton- the Corps tested new concepts and equipment. For the first time during this year's exercise, the USS Essex, an amphibious assault ship, carried the new F-35 Joint Strike Fighter.

The Marines also test-fired a new rocket system both on land and -- for the first time -- from the deck of a ship. The rocket system is part of new technology the Marines hope will revive the old idea of amphibious assaults in the coming years.

The Marines haven't actually landed under fire since the Korean War. The amphibious landing at Inchon broke a stalemate for Gen. Douglas MacArthur's forces. But that was 66 years ago.

Storming a beach is still an option

Though it has been a long time since an amphibious landing has been used, the Marines argue storming a beach is still an option. 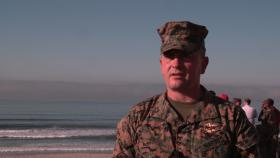 "It gives the president options," said Marine Brigadier General Rick Uribe, the deputy commanding general for the 1st Marine Expeditionary Force. "It allows him to go to a time and place of his choosing and go in forcibly if necessary."

Though amphibious operations are typically associated with the use of military force, there are other reasons why Marines continue this type of training, Uribe said. While the exercise was underway on the West Coast, the Navy was landing Marines and supplies in the hurricane-ravaged Caribbean.

"Look at all the humanitarian operations. Look at Puerto Rico, Haiti a few years ago," Uribe said. "Had the Navy and the Marines not had this amphibious capability, I think there would be a lot more loss and suffering of peoples."

Dawn Blitz began in 2010, and at the time, Secretary of Defense Robert Gates questioned whether the Marines would ever stage another amphibious landing on the scale of D-Day, Iwo Jima or Inchon.

One of the obstacles is anti-ship missiles, which have become cheap and readily available. They force the Navy to stay farther at sea.

Meanwhile, the main watercraft the Marines use to land on a beach - the Amphibious Assault Vehicle - is out of date and vulnerable to improvised explosive devices. The design is a necessary compromise. It is both a boat and a troop carrier on land.

The AAV has been around since the early 1970s.

"We do a good job of maintaining them, and they give us the right parts," said Chance Carlson, an AAV mechanic.

Carlson's AAV was part of a unit of the big-tracked vehicles staging in double rows along the beach after a second line of Marines camp ashore. 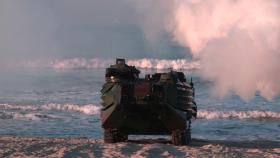 But even if Marines keep the AAVs in working order, the vehicles are slow. They travel about 45 miles an hour on land. But in the water, they can only go eight miles an hour, so they take a long time to get to the beach. The farther missiles push the Navy from shore, the longer it takes the Marines to make landfall in their AAVs.

For years, Congress and the Pentagon have been debating how to replace the Amphibious Assault Vehicle. One program was canceled after critics questioned the cost as well as whether the Marines would be better off with a troop carrier that served them mainly on land.

This year, the military released a new concept for amphibious landings, called Littoral Operations in a Contested Environment. Instead of leading with the heavy armor used on D-Day, the Marines are talking about spreading enemy defenses by landing small forces by air slightly inland or on nearby islands.